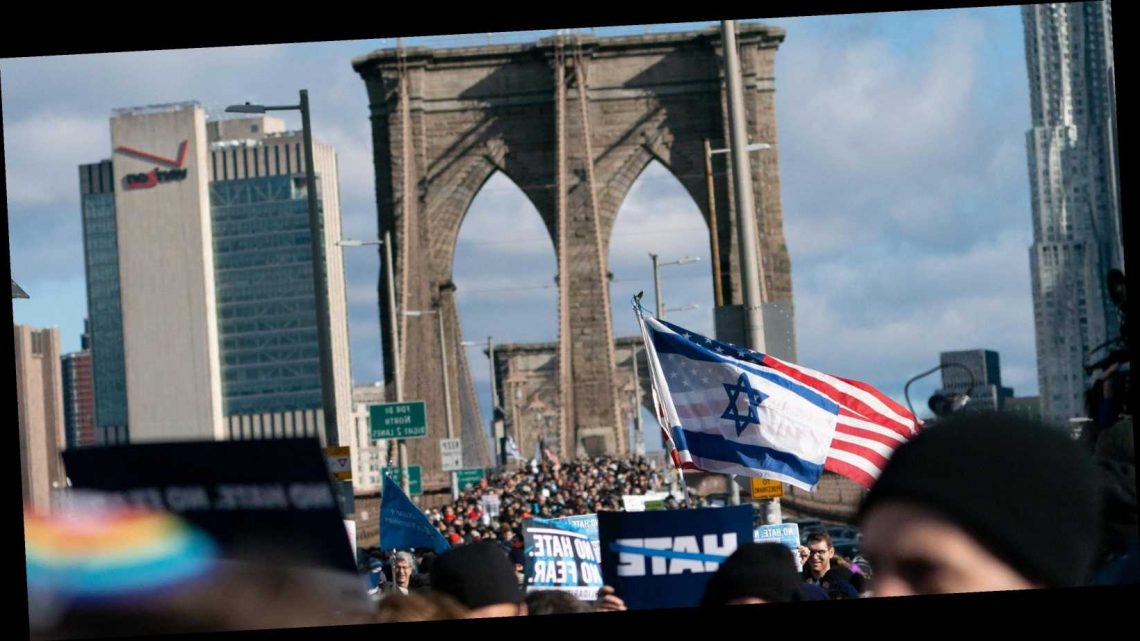 As world marks International Holocaust Remembrance Day, anti-Semitic attacks are on the rise

International Holocaust Remembrance Day, which Monday commemorated the 75th anniversary of the liberation of Auschwitz, represents one of myriad efforts to keep the lessons of the Holocaust alive – against increasing resistance and acts of hate.

Other universities throughout the U.S. teach courses on the Holocaust that professors say are popular with students.

The U.S. Holocaust Memorial Museum in Washington, D.C., received more than 1.6 million visitors in 2018 – 93% of them non-Jewish – in addition to more than 20 million visits to its website.

Yet, incidents of anti-Semitism are on the rise domestically and globally. In its latest audit, the Anti-Defamation League reported 1,879 acts against Jews in the U.S. in 2018, the third highest number in 40 years. The organization also cited New York Police Department figures that said there had been more anti-Jewish incidents in the city in 2019 than all other crimes added together.

Attacks such as the deadly shootings at synagogues in Pittsburgh in 2018 and Poway, outside San Diego, last year, along with the December assault on a New Jersey kosher market – episodes that in total claimed the lives of 15 people – garnered the biggest headlines but were far from the extent of the problem.

“It’s also the kids who snap a ‘Heil Hitler’ salute for a gag, the swastikas scrawled on a garage door, the college campuses where Jewish students are ostracized for supporting Israel,” ADL CEO Jonathan Greenblatt said in a Jan. 15 address to Congress. “This moment is about women wearing wigs harassed as they ride the subway or men wearing black hats assaulted as they cross the street. It’s the idea that a person isn’t safe in their supermarket, in their synagogue, or in their home just because they are Jewish.”

People participate in a Jewish solidarity march across the Brooklyn Bridge in New York City. The march was held in response to a recent rise in anti-Semitic crimes in the greater New York metropolitan area. (Photo: Jeenah Moon/Getty Images)

The seeming incongruity between the increased targeting of Jewish people and the concerted efforts to remind the world of the atrocities committed in the Holocaust – in which 6 million Jews died – is not altogether jarring to experts on the field.

They point to societal changes, increased immigration, a polarized political climate, the cacophony of tropes and misinformation online and a lack of education at the pre-college levels as contributing factors.

“Whenever things get tough, whenever there’s polarization, whenever there’s political or religious extremism, you need a scapegoat, and the Jews are the prototypical scapegoat because they have been the outsiders now for thousands of years,’’ said Stephen D. Smith, executive director of the Shoah Foundation.

A clear example are immigrants, whose surging numbers in the U.S. and Europe have prompted a backlash that facilitated a rise in right-wing nationalism.

In announcing his candidacy for the presidency in 2015, Donald Trump called immigrants from Mexico rapists and criminals. As president, Trump has continued his denunciations and endorsed hard-line policies against immigrants, both documented and undocumented.

Steven Katz, a religion professor at Boston University who has written extensively about the Holocaust and Jewish philosophy, said such harsh rhetoric permeates to minority groups like Jews.

Katz emphasized he doesn’t believe Trump is anti-Semitic, noting he has a Jewish son-in-law and adviser in Jared Kushner, and that Trump’s own daughter Ivanka converted to Judaism to marry Kushner. Trump also has chosen high-level Jewish officials such as Secretary of the Treasury Steve Mnuchin and former economic adviser Gary Cohen.

Seventy-five years after the liberation of the Auschwitz concentration camp, a survivor shares her story and urges for more education. (Jan. 24)

“But it’s clear he manifests in his own world view some of this fear about America changing. And for him it’s not the Jews that are the issues; it’s immigrants,’’ Katz said. “You saw that in the centrality that immigration played in his campaign in 2016, building the wall, all these things. That heightens the tension, and he sends a signal, not necessarily intentional, that people will need to defend themselves, guard against changes in this social order and the population matrix.’’

Katz believes those changes are at the center of the latest anti-Semitic wave, along with a long history of being scapegoated and the perception that Jewish people are wealthy and powerful. The growing economic disparity and increase in the non-white population in this country have created fear and anxiety, Katz said, leading to a resentment that is further fueled by conspiracy theories promulgated online.

Those find a receptive audience because youth education about the Holocaust is “abysmal,’’ according to Katz.

Only 11 states require Holocaust history to be taught at schools. That may be part of the reason why a 2018 survey showed 66% of millennials could not identify the notorious Auschwitz – where 1.1 million people died, the vast majority of them Jewish – and 22% could not confirm having heard of the Holocaust.

Significant gaps in Holocaust knowledge have been revealed by surveys in other countries as well.

“Anti-Semitism has been called the world’s longest hatred and it has a peculiar shape. We see it in America today,’’ Katz said. “Why does someone go into a synagogue in Pittsburgh and shoot people? This is a very, very deep-rooted issue in Western society. That anti-Semitism is sort of part of the bloodline, and it’s very hard to expunge the virus.’’

The film "Jojo Rabbit,'' about a boy in World Word II Germany who discovers his mother is hiding a Jewish girl, earned an Oscar nomination for best picture. (Photo: Larry Horricks, Fox Searchlight Pictures via AP)

Attempts to educate people have become more technologically advanced. Smith said the way the Holocaust is taught has changed dramatically in the last 10 years, such as the addition of more video – including testimonies in several languages – and social media elements.

He said the voluminous amount of information in the Shoah Foundation archives is equally available to teachers and students, who find it presented in ways more relevant to how they learn today. Students in more than 125 USC classes in a wide range of disciplines use the archives, which are accessed by millions of people in all 50 states and 75 countries.

The foundation also entered into an educational partnership with the makers of the Oscar-nominated film “Jojo Rabbit,’’ which tells the fictitious story of a German boy who finds out during WWII that his mother has been hiding a Jewish girl.

“So much of what we do is digital. That creates much more choice,’’ Smith said, emphasizing the importance of not just teaching but contextualizing the Holocaust and other genocides. “We have to take a much more sophisticated approach to education that gives young people the tools to be able to look at society as a whole and see what values they want in that society and to act upon them.’’

Story of survival: Her family tried to poison her during the Holocaust. Today, she tells her story

He’s heartened that not only has his class always been in high demand, but that students often came back to tell him it was the most important one they took, and sometimes they went on to work with refugees and/or immigrants.

Waltzer also sounds a note of caution about the similarities he sees in current events and American policy and the elements that led to the Holocaust.

“We need to actively counter both the hatred of anti-Semitism and the meta-narrative anti-Semites repeat that Jews are behind what is bad or problematic in the world, that Jews are all powerful and influential, that everything challenging in our world is somehow the fault of the Jews,’’ Waltzer said.

“Similarly, we need to counter other hatred and narratives that blame events on minorities, women and those who are sexually different. And we need to do these things together with others,’’ he said.