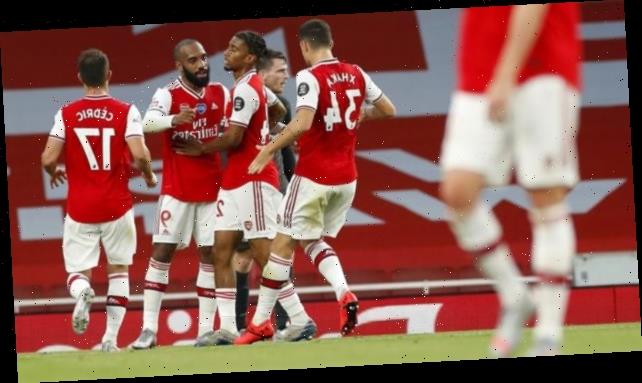 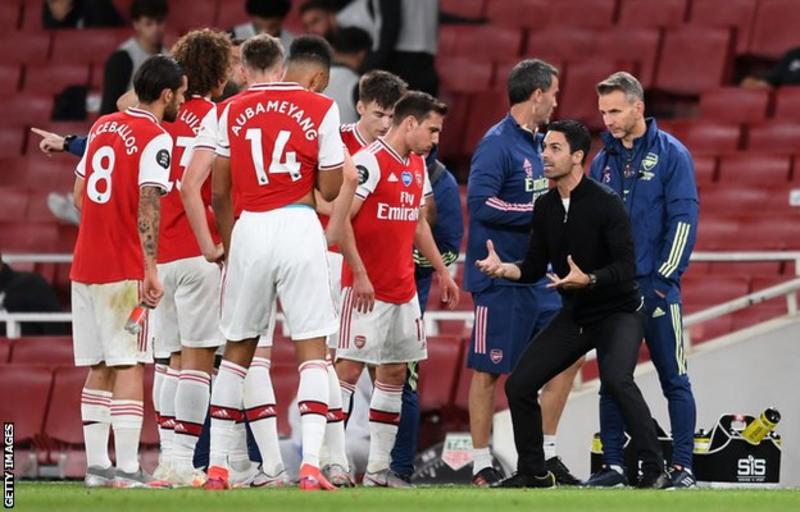 Mikel Arteta had his most satisfying night as Arsenal manager when Premier League champions Liverpool were beaten at Emirates Stadium on Wednesday – but it also outlined the scale of the task he faces.

The 38-year-old former Gunners midfielder, appointed to replace fellow Spaniard Unai Emery shortly before Christmas, admitted the gulf between Liverpool and Arsenal is as wide as the current 40-point gap suggests.

And yet Arteta can lift spirits and make the biggest statement of his reign when Arsenal face Manchester City – where he was assistant to Pep Guardiola – in the FA Cup semi-final at Wembley on Saturday (kick-off 19:45 BST).

So how is Arteta settling into his role before the game that can shape Arsenal’s season?

Arteta was understandably all smiles after Arsenal came from behind to beat Liverpool 2-1 but he was also realistic as he said: “The gap between the two teams today is enormous but the accountability, the fight, is now equal and I’m very proud of that.”

Arsenal have made themselves an easy target in the past for those who point to flaky character and defensive frailty – but showed the other side of the personality Arteta is attempting to instil against Liverpool.

Liverpool, maybe off the pace slightly with the club’s first league title in 30 years secured, are still regarded as the benchmark for energy and work-rate, but Arsenal out-ran them, covering 112.1km compared with 108.1km from Jurgen Klopp’s side.

It may just have been because Arsenal spent so much time without the ball as their 31.5% share of possession was their lowest in a Premier League game since Opta started compiling those statistics in 2003-04.

The work was done, however, urged on by Arteta on the sidelines, using at least three of his five languages to inspire his players, the orders audible in an empty stadium.

The manner in which Arsenal dug in – in what some might regard as uncharacteristic fashion – must be repeated over time, but the sight of the likes of David Luiz and his fellow defenders hurling themselves in front of the ball in a mixture of defiance and desperation is what Arteta regards as the rule rather than the exception. 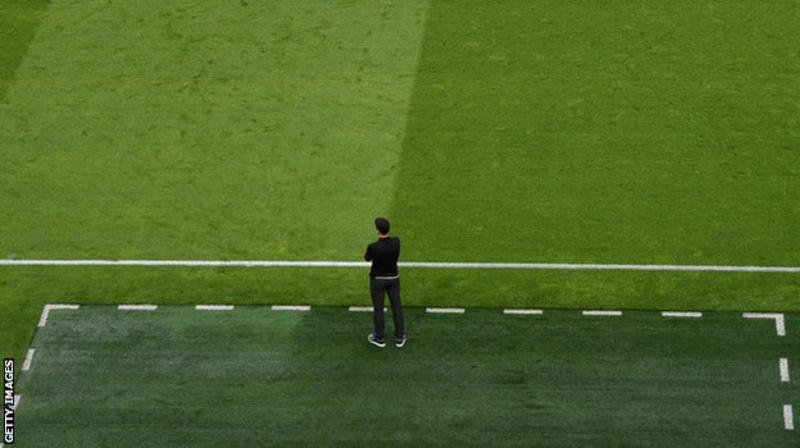 When Arteta was appointed to succeed Emery in December there was clearly an element of gamble in handing the fortunes of this huge club, with its great expectations, to someone taking on his first managerial job.

This was not, however, a hasty decision or an easy pick of a ‘Pep Guardiola-lite’ given Arteta’s success and reputation as right-hand man during Manchester City’s recent domination.

Arteta had been in the Arsenal hierarchy’s thinking for some time, almost getting the job before Emery was appointed in May 2018. The trophies won alongside Guardiola simply confirmed the thinking rather than shaped it.

He had leadership qualities that were recognised inside the north London club’s corridors of power when he was a player there and noted for future reference. Arteta was seen as a leader inside the dressing room and that influence was clear to those outside.

In these early, transitional days what has impressed around the club has been Arteta’s calmness and clarity about what he wants to achieve, his insistence on his own style – and his understanding of Arsenal.

Arsenal’s motto is “Victoria Concordia Crescit” – “victory grows out of harmony” – and Arteta has been at pains to unite the club and fanbase that had been fractured at times in the latter years of Arsene Wenger’s reign and then under Emery.

Shortly after taking over, Arteta and his assistants, Steve Round and Albert Stuivenberg, visited the head offices at the Emirates to meet and shake hands with every member of staff. The manager then gave a speech in each department outlining how important unity and teamwork would be, on and off the pitch, in his pursuit of success. 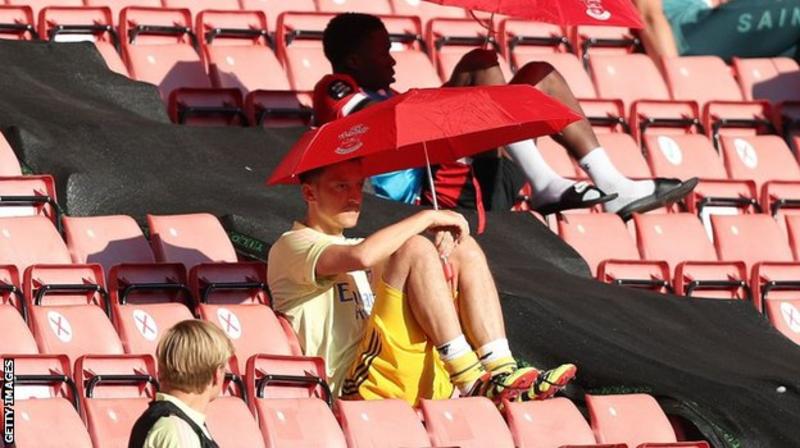 While Arteta is comfortable working within Arsenal’s structure, this does not divert this single-minded individual making demands to do things his way – on and off the pitch.

It was seen when he conducted his post-match briefing following the win against Liverpool, which took the Gunners into ninth, three points behind sixth-placed Wolves.

Arteta was in a buoyant mood but also a realistic one as he made it clear he wants serious backing in the transfer market, responding when asked about funds: “I don’t know. It’s a big concern.

“You need to build a squad. It’s not magic. You need to improve with quality, quality players in the squad, and you need bigger squads to compete in this competition. There’s the challenge.”

Arsenal spent more than £135m last summer, breaking their transfer record to sign forward Pepe from Lille for £72m – but Arteta wants his own stamp on this team.

His streak of steel can be found in the two current Arsenal exiles, Mesut Ozil and Matteo Guendouzi – players at opposite ends of the scale of experience but both seemingly with little or no future at the club.

Since Arteta arrived at Arsenal, Ozil has started 12 games and played 976 minutes. He has not figured since the Premier League season resumed.

Guendouzi is 21 and full of promise, but his reserves of discipline seem empty. He has been marginalised since he lost the plot when Arsenal slumped to a late 2-1 loss at Brighton in their first game back after “Project Restart”.

The Frenchman lost his head after keeper Bernd Leno was injured in a challenge with Neal Maupay, and was fortunate to escape punishment for grabbing Brighton’s match-winner around the throat at the final whistle.

Maupay’s post-match criticism was clearly aimed at Guendouzi when he said: “He was talking the whole game but was saying really bad things. I don’t want to say what he said because I could be in trouble. It was in French because he is French.”

Whatever was said, events at the Amex Stadium clearly had a huge impact on Arteta as he has banished Guendouzi from the first team, leaving his Arsenal future in serious doubt.

Arteta is already renowned around Arsenal’s London Colney training base for his calm and clarity – but underneath lies a personality not to be crossed.

So are Arsenal improving under Arteta?

Inevitably, results have been mixed and old failings still exist – as seen with the defensive lapses that transformed a performance that deserved at least a draw into a 2-1 defeat at Spurs.

There is, however, an energy about Arsenal that comes from their manager and his touchline micro-management, complete with those multi-lingual instructions. There was passion in the closing stages against Liverpool, even with a team clearly selected with a glance at that FA Cup semi-final.

Emery won only four of his 15 Premier League games this season, while Arteta has won eight of his 18 in charge following Freddie Ljungberg’s spell as stand-in.

Arsenal were 11th when Emery left in December but in a league table comprised only of results since Arteta took over, the Gunners would be fifth behind Liverpool, Manchester City, Manchester United and Chelsea, with 30 points from those 18 games.

Further good news, and testimony to Arteta’s start, is that two outstanding teenage talents – Bukayo Saka and Gabriel Martinelli – have both committed to long-term contracts.

Arteta is still hoping to persuade 31-year-old Pierre-Emerick Aubameyang to sign a new deal and, if he does, then he will have a world-class striker to spearhead Arsenal, at least for the medium term.

It is early days, but cautious optimism is returning.