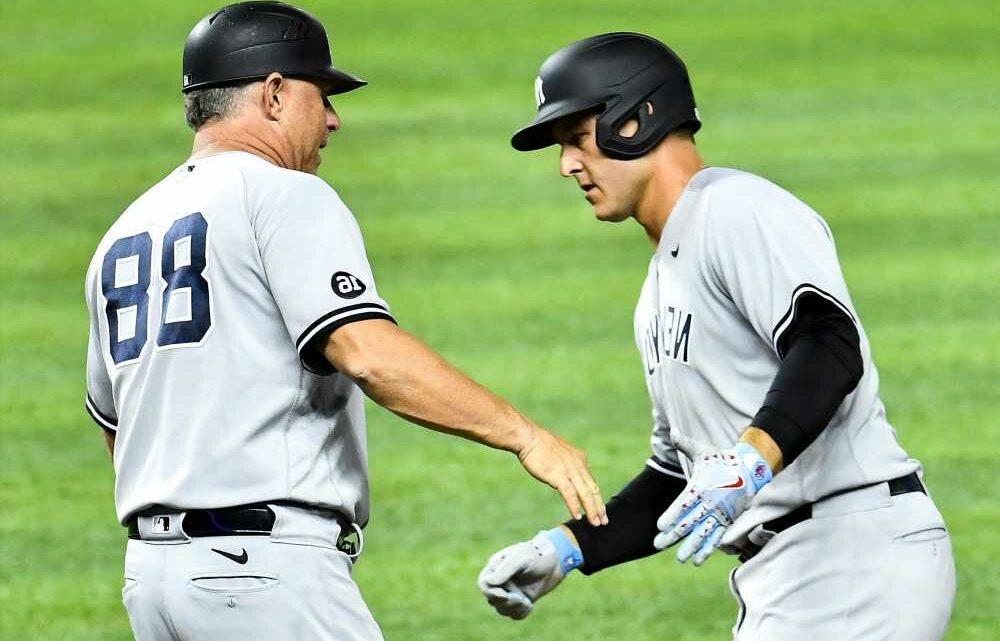 Newest Yankee shaves off beard — and has a famous number

Breaking down the Yankees’ deadline splashes

What Anthony Rizzo thinks of being traded to Yankees

MIAMI — For a little over five innings, the Yankees’ new lineup looked a lot like the old one.

New arrival Anthony Rizzo got the Yankees on the board with a mammoth solo homer to right-center with one out in the sixth inning, sparking a 3-1 win over the Marlins at loanDepot Park.

On the night Rizzo and Joey Gallo joined the Yankees, the offense looked as anemic as it had throughout the season. The Yankees didn’t score until Rizzo’s 449-foot shot into the upper deck.

Right-hander Jameson Taillon did his part to keep the Yankees in the game.

Impressive in his previous seven starts — and even better the last four, when he had a 1.42 ERA — Taillon was effective again Friday.

Taillon tossed 5 ²/₃ scoreless innings in a 98-pitch performance. He pitched around a pair of singles in the first with the help of a double play.

Miami right-hander Zach Thompson matched Taillon, zero for zero, for most of the night.

After Aaron Judge and Rizzo reached with two outs in the top of the first, Giancarlo Stanton whiffed to end the threat.

Taillon, batting because there was no DH, even walked to lead off the fifth, but was erased when Gleyber Torres grounded into a double play.

In the sixth, Taillon got the first two outs, then left the game after walking Brian Anderson.

Jonathan Loaisiga entered and got Jorge Alfaro to hit a routine grounder to second, but Rougned Odor botched the play and the Marlins had two on and two out for Bryan De La Cruz. When De La Cruz hit a ground ball up the middle, however, Torres made a fine diving stop and throw to second for the force to end the threat and preserve the one-run lead.

Tyler Wade, playing third base with DJ LeMahieu and Gio Urshela nursing injuries, led off the seventh with a walk, but was thrown out trying to steal second.

Things got worse when Torres was called looking, to end the inning, on a pitch that was outside. He argued the call, slammed his bat down and was tossed by home plate umpire Dan Bellino.

The ejection meant LeMahieu, who had been held out of the lineup with a strained triceps, had to come in to play second base, with Odor moving to third and Wade to short in the bottom of the seventh.

The Yankees loaded the bases with one out in the eighth.

It started when former Yankee Richard Bleier hit Judge with a pitch. Rizzo followed with a single and Urshela, who was in the starting lineup due to a tight hamstring, pinch-hit in the pitcher’s spot.

Ushela singled and was replaced by Nestor Cortes (yup, the pitcher) as a pinch runner. Odor followed with a two-run single.

Cortes overran second base and should have been thrown out, but he managed to get back to the bag in time.

After Loasiga tossed 1 ¹/₃ scoreless innings, Zack Britton entered to start the bottom of the eighth.

Britton gave up a grounder up the middle to Jazz Chisholm for a leadoff single and a bloop hit to right to Jesus Aguilar to put runners on the corners with no one out.

The left-hander recovered to get Anderson to hit into a double play, though Chisholm scored to make it 3-1. Alfaro followed by striking out.

Aroldis Chapman hit pinch-hitter Joe Panik with a pitch with two outs in the ninth before fanning Magneuris Sierra to end it.