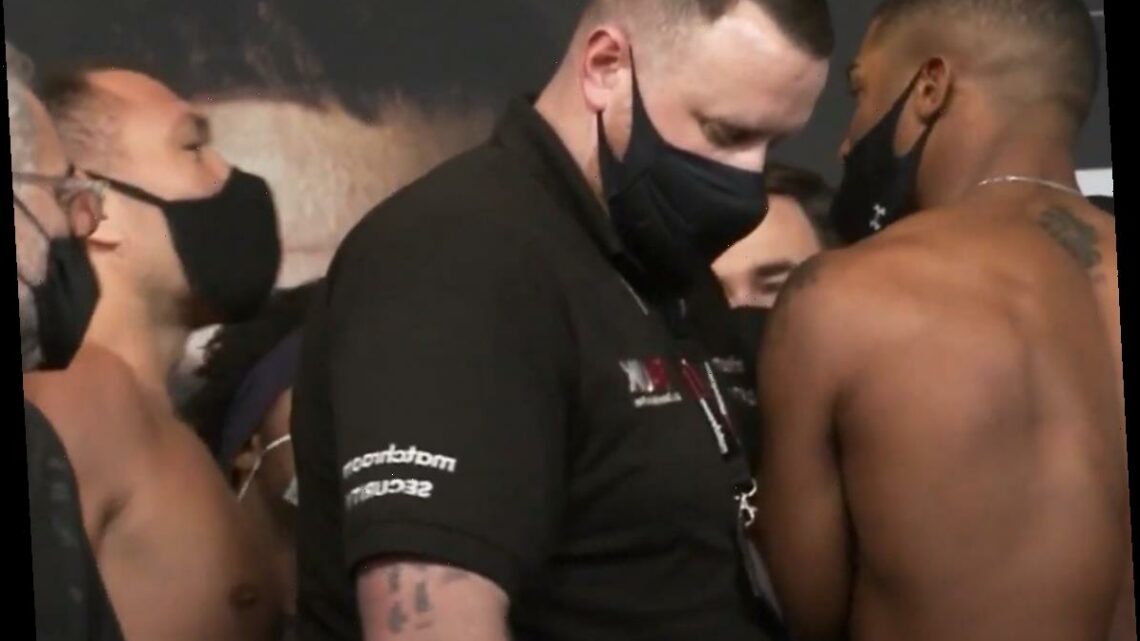 Anthony Joshua and Kubrat Pulev were involved in a heated confrontation at the weigh-in on Friday ahead of their heavyweight title bout this weekend.

Joshua defends his WBA, WBO, IBF and IBO championships against the Bulgarian in front of 1,000 fans at Wembley Arena in London on Saturday evening, and thus far the pair have remained cordial for the most part.

But that changed as they took to the scales on Friday.

Pulev was out first, and the 39-year-old initiated a verbal exchange with Joshua once the Briton emerged.

The challenger continued to speak to Joshua throughout the weigh-in, looking increasingly agitated as the champion responded in kind, causing security to keep the heavyweights apart.

As Joshua and Pulev finally faced off, the opponents continued their heated discussion, which was largely inaudible due to the masks they were wearing in the anti-coronavirus bubble.

Joshua put his hands on the Bulgarian, and security again stepped in to separate the fighters.

When asked by Sky Sports what had caused the intense confrontation, Joshua said: “I dunno, bro, that’s just how we are.

“[He was] talking a lot of… rubbish… I don’t wanna swear on TV, but he spoke a lot of rubbish. Just back yourself really, that’s all it is.”

When asked what he had said to Pulev, Joshua laughed: “I don’t really wanna repeat that on live TV.

“I just told him: ‘Many years I’ve been watching boxing and I’ve seen so many fighters talk a load of rubbish, then they get smacked up.’

“So that’s just him doing what fighters do. Unless you study boxing, that type of stuff would intimidate someone, but that don’t really intimidate me.

“I would’ve just clapped him in his jaw there and then, but I’ve gotta do it tomorrow.

“I know what he’s like, I’ve studied him. He thinks he’s a warrior. But I said: ‘Don’t let the guys you’ve fought gas you up; you’re in against a real one now.’

“When people come in the ring with me, they’re confident, then after a few rounds their soul gets destroyed. Once I see that, I can take them out.”

Joshua weighed in three pounds heavier than he did against Andy Ruiz Jr ahead of the pair’s rematch last December – AJ’s last bout, which he won via unanimous decision.

Asked for a prediction for Saturday’s main event, Joshua said: “First man to land, I think that’ll be the last man standing.”