Home » Sport » Andrew Whitworth Had His Way With The Cowboys 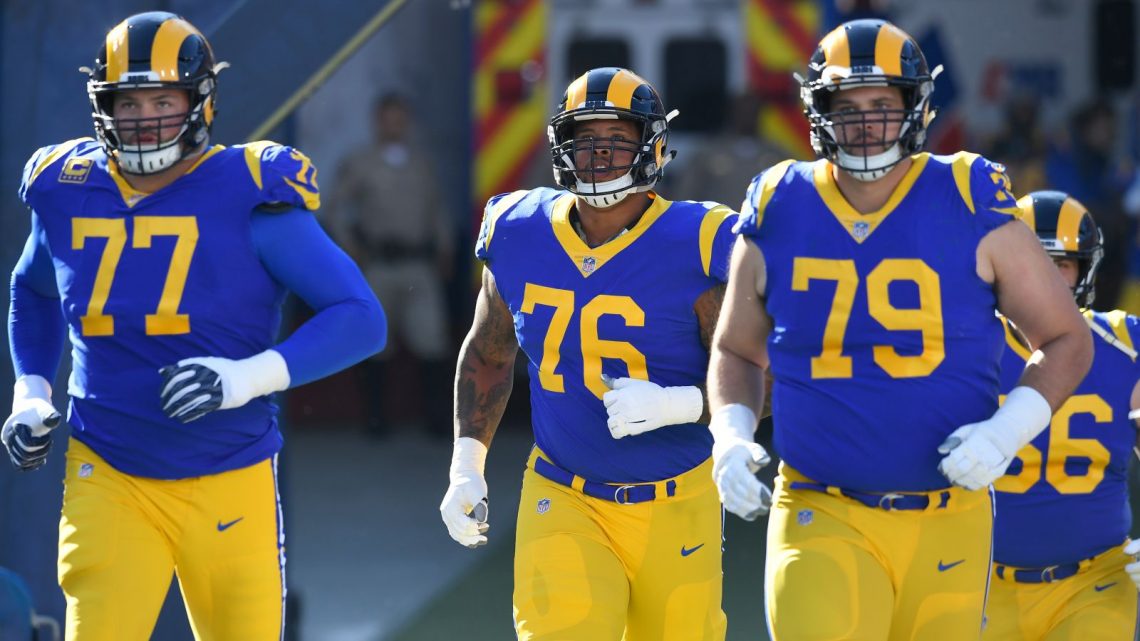 Andrew Whitworth Had His Way With The Cowboys

The Rams’ offensive line is in the soul-protecting business. The Cowboys’ vaunted defensive front, fresh off holding the Seahawks’ NFL-best ground game to just 73 yards rushing in last week’s wild card win, spent all week talking, dreaming, drooling over the havoc they were going to wreak at the line of scrimmage. Dallas DE DeMarcus Lawrence promised that it’s not just about the hits, it’s about making opponents scared.

“I go in every week wanting to take a quarterback’s soul,” Lawrence said. “You look in a man’s eye and see fear in his heart. That is when you know you got him.”

That was bulletin-board material for the Rams’ O-line. Jared Goff’s soul remains intact after the Rams’ 33-20 win on Saturday night, and his body too: he took no sacks and was hit just once. The Rams’ front five—Andrew Whitworth, Rodger Saffold, John Sullivan, Austin Blythe and Rob Havenstein—was absolutely dominant, giving Goff all the time he needed and springing running backs Todd Gurley and CJ Anderson for a combined 238 yards and three scores on 39 carries.

So now you know why Aqib Talib burst into Goff’s on-field interview to scream, “He ain’t taking no fucking soul out here!”

Left tackle Andrew Whitworth preferred to let the numbers and the result speak for themselves.

“We heard [his soul-snatching comment],” Whitworth said. “He didn’t get crap all night and they got buried. I think we’ve said all we need to say.”

Whitworth was a monster all game, nowhere more clearly than on Anderson’s second touchdown, which put the game out of reach. Watch Whitworth, No. 77, manhandle Lawrence to the outside to clear a nice juicy hole for Anderson.

That was the story of Whitworth’s night; he was the keystone of the front five, completely shutting down the left side and allowing the line to do whatever it wanted. Here’s Todd Gurley in the second quarter, going 35 yards untouched for a touchdown in the second quarter. On the replay at the 30-second mark, it’s the center and guards who are highlighted for plowing the pile to the right to clear space for Gurley. But note what that leaves on the left side: Whitworth all alone, vs. three Cowboys.

So what did Whitworth do? He shoved Caraun Reid to the ground, which also took Randy Gregory out of the play, then ran upfield to tie up the safety to spring Gurley back to the left. Incredible.

“The big boys did it,” Anderson said. “All week they was hearing about how the Cowboys defensive line was all this and how they stopped Seattle’s run game.”

Whitworth, 37, is an old man by football standards, and until last night he held an NFL record he never wanted. Thanks mostly to spending the first 11 years of his career in Cincinnati, Whitworth had played in seven postseason games—and lost all seven. No player in the history of the league had ever gone 0-7 in the playoffs. It’s got to make 1-7 feel that much sweeter.