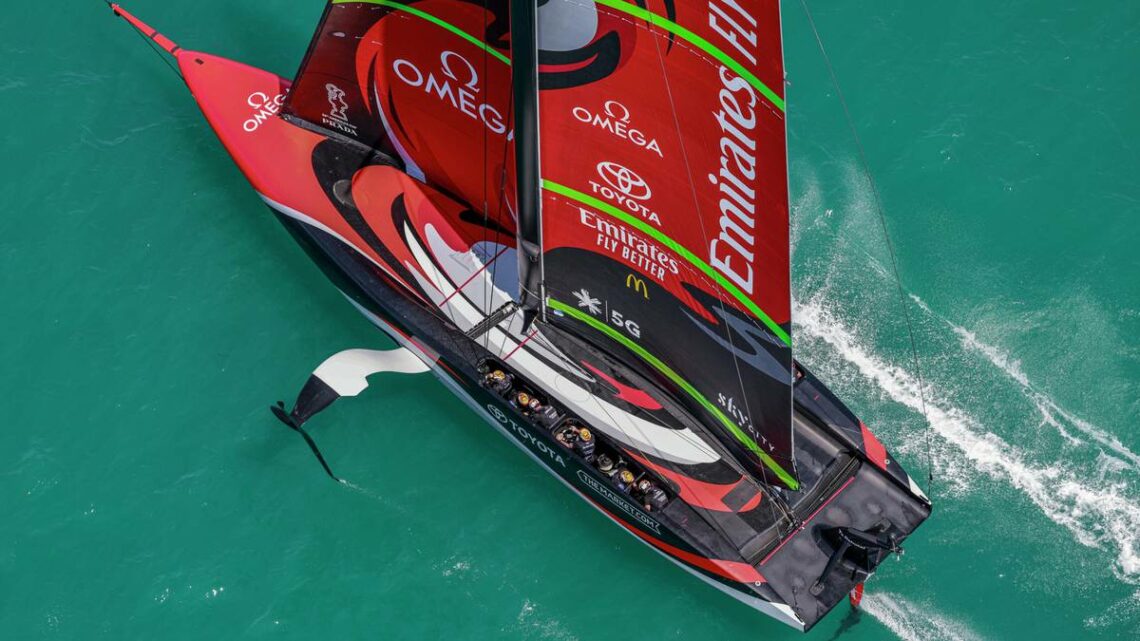 Team New Zealand’s boat has been described as “scary” by the vanquished British team, on the eve of the America’s Cup final.

In a substantial interview with yachtracinglife, Ainslie and Ineos CEO Grant Simmer were clearly in awe of the Kiwi boat.

Simmer said: “The Italians sailed extremely well in the (Prada Cup) final and their boat is going well through a range of conditions.

“They are very good in light air yet were also fine against us in that 15 knot range.

“But on the other hand, when we go and watch the Kiwis sail they can turn on some really impressive performances.

“What we’ve seen of them, their performance is pretty scary. If we had of ended up racing as the challenger, we’d have been quite intimidated by some of the performances we’ve seen.

“Have the Italians bridged the gap? Hard to say. They’ve certainly got a lot better and are racing very well.”

Ainslie agreed with Simmer’s summary but wouldn’t predict an outcome.

“Over 10/11 knots of wind the Kiwis have an advantage speed wise,” Ainslie said.

“The Italians will be match fit and it’s sport – anything can happen.

“You have to sail these boats very accurately – you only have to sneeze at the wrong time and they can capsize.

“It’s way too early to put bets down.”

But Ainslie said the Kiwi crew were more than capable of overcoming their lack of competitive sailing.

Burling and co. would be helped by the way Ineos tested them in pre-starts during the December warm-up. And Anslie even claimed that as a member of the challenger fleet, it had been a “mistake” awakening TNZ to the extent of their starting issues.

“Watching them, they have developed a lot,” he said.

“They can only practice against the chase boat but they’ve done it to good effect.

“They are a smart group. It’s similar to Bermuda where they turned up quite late and didn’t have the training of the other teams but worked it out pretty quick.

“In this case they haven’t got much time but they are very talented sailors who can deal with it.”

While Luna Rossa’s Jimmy Spithill and Francesco Bruni had the match racing pedigree against the “drag” racing background of 49er stars Burling and Blair Tuke, Ainslie said the Kiwi team would develop a strategy to compensate.

“The Italians will give them a hard time,” said Ainslie.

“But TNZ’s straight line pace is going to be pretty hard to match, certainly in the medium to stronger wind range.”

The Brits confirmed they had no interest in assisting Luna Rossa with practice racing, as had occurred between challengers in past America’s Cups.

The interview did not raise the issue of a breakdown in relations between the Kiwis and Italians, the challengers of record.

TNZ is lining up the Brits as future partners. This means any British help for Luna Rossa could be construed as a conflict of future interests.

“It’s not been the easiest of cups off the water,” Ainslie said.

“The America’s Cup has a history of politics and so on behind the scenes.

“At the end of the day, we’d rather stay out of it. It’s right that Luna Rossa and Team New Zealand are on their own from here on. May the best team win.”

Meanwhile the Ineos bosses said that, along with American Magic, they had been disadvantaged getting the class rules late.

This had led to their initial boat being way off the pace. They had only five months to get a boat ready after receiving the rules in April 2018.

But Ainslie loves the AC75s, describing the second boat as a “real joy to sail”.

“They are seriously cool boats to sail – the best boat I’ve ever sailed on,” said Ainslie, the Olympic legend.

Asked by interviewer Matt Sheahan whether their boats would be for sale on ebay, Simmer said “the first one will be particularly cheap”.