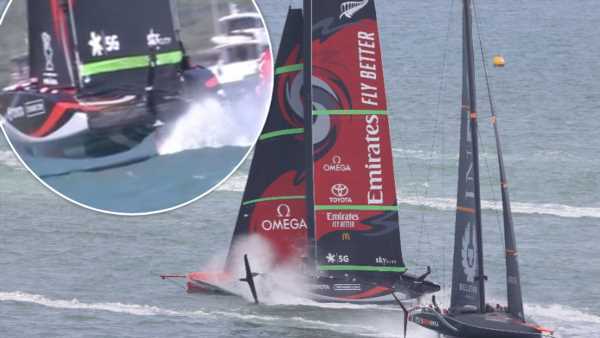 Team New Zealand have come away from the second day of the America’s Cup World Series with two wins in as many races, though not without their issues to address.

After taking a 1:32 win over Ineos Team UK earlier in the day, Team New Zealand made an absolute mess of their start in the second race, parked in the starting box as the British challenger flew over the starting line.

But while Sir Ben Ainslie’s crew well and truly won the start, the difference in boat speed between the two teams’ vessel was ultimately the deciding factor of the tie.

Sailing upwind, Team New Zealand’s boat speed was superior as they held a consistent advantage of about two to three knots over their British counterparts, who have made no secret that they need to do a lot of work to improve in the lighter winds.

While the British crew held onto their lead gained at the starting line with a 12-second advantage through the first gate, by the midway point of the second leg, Team New Zealand had taken over.

The lead changed twice more before the end of the second leg, as Team New Zealand had a far better entry to the second gate and snuck through it just four seconds before the British syndicate.

They only built on their lead from there, going on to win by 1:42.

AUT’s Sailing Professor Mark Orams told the Herald that while Team NZ have a much faster boat, “they are making too many mistakes”.

“Their pre-start splash down in this race, had they been facing either of the other two challengers, would have been race losers,” Orams said.

“While they have won both races today, I don’t think they will be overly happy with their performance. The positive is boat speed is good, the work-ons involve manoeuvres under pressure.”

In their first race, with a lead out of the start box, Team New Zealand went on with the job, building on their lead through almost every leg.

Despite a shaky manoeuvre around the first marker and a splashdown heading into the fourth gate, Team New Zealand sailed a much better race than they did in their final outing on day one when they were beaten by American Magic.

The former incident was especially hair-raising, with Orams calling it a great escape and praising the quick thinking of Australian veteran Glenn Ashby.

“Team New Zealand were very lucky not to hook the top mark with a foil. If they hit that mark it would cause major damage – day over,” Orams said.

“A very close call, and a reflection that Peter Burling cannot see where the mark is from his steering position. It was Glenn Ashby who saved him, by calling very quickly ‘no lower, no lower’.”

It was the team’s transition from the fourth to the fifth leg that they should take the most positives out of in what is largely a practice regatta.

Team New Zealand went airborne on their approach to the fourth gate and had to sit off their foils, but quickly got back onto them as they rounded the marker.

They followed that with a clean upwind leg, extending their lead to beyond a minute, before sending it home downwind on the final leg for what ended up being a convincing win.

For Ineos Team UK, who had technological issues throughout the opening day of racing, this was the first time they were able to be even remotely competitive and gave them an opportunity to show what their boat could be capable of.

While they could have made more of their position in the starting box, there will be plenty for the British syndicate to take away before their second race against Team New Zealand later today.

Enjoy smooth sailing to the Cup with Auckland Transport

• Avoid traffic congestion and parking niggles and download the AT Mobile app to plot your bus, train or ferry ride to race venues before you leave home.

• Make sure your AT HOP card is in your pocket. It’s the best way to ride to the Cup