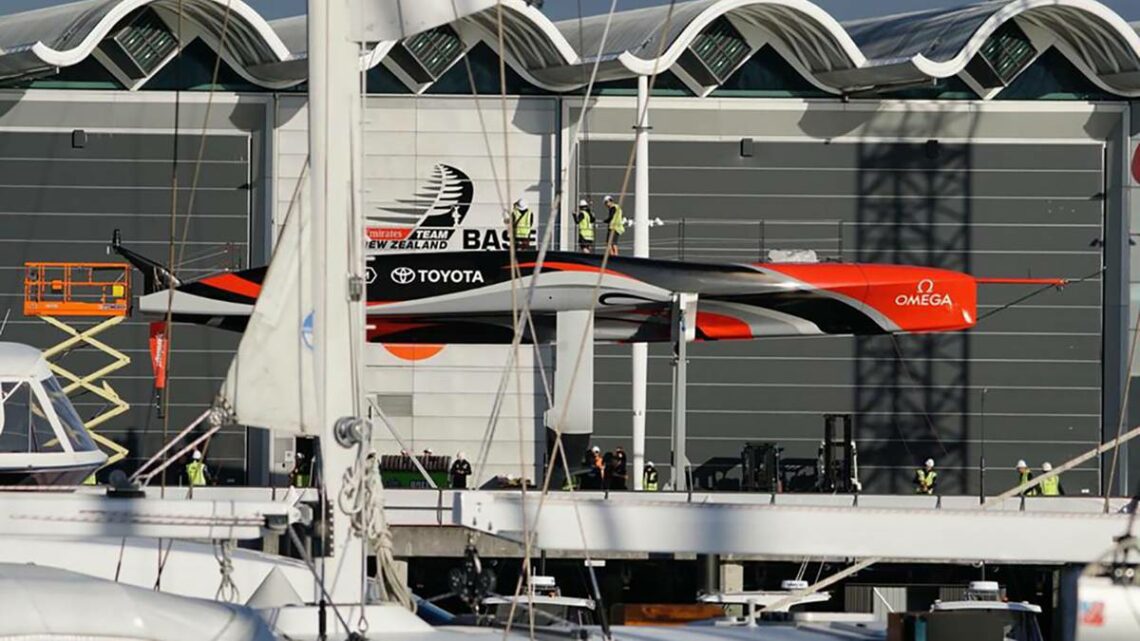 Fanfare over the launch of Team New Zealand’s second boat should not mask the possibility that either serious issues or a late design amendment may have caused its delayed appearance.

The launch of this second boat has not disappointed, with Team New Zealand preserving its well won reputation for kicking the ball as far ahead as possible, then chasing it.

I love what they have come up with – now it’s up to Peter Burling and co. to make the most of it.

Overall, it seems to me that TNZ are aiming to fly as close to the water as possible, which answers some of our questions. But mystery will remain over why Team New Zealand’s second boat has taken so long to appear.

In the finest traditions of the America’s Cup, today’s launch has not only answered questions, but left others remaining.

It was a big call from the Kiwi team to stay out of the water for so long. Every hour of testing is precious. You can never get that time back.

When TNZ packed up “Te Aihe”, their first boat, five weeks ago it suggested the launch of their new, second boat was imminent.

The days turned into weeks, then over a month. Meanwhile their opponents have been testing their new machines on the race course areas and getting faster, better and more competitive.

That leaves the big question: Why have TNZ waited so long to launch (add name here)? There are several possible reasons:

1. They are working to their own schedule and have calculated the sailing days needed to be race ready for March 6 (Race 1 of the America’s Cup). In contrast, the challengers begin their selection series nearly two months earlier on January 15 – so TNZ have more time available to practice and tune their boat before they race.

This is the official line from the defenders, but if this is the case why did they “mothball” the first race boat over a month ago and pass up valuable comparison time with the challengers. Opportunity lost.

2. There was an unanticipated problem which delayed the planned launch in October. If so, it will have been a significant one.My understanding is that the second boat was shifted to the TNZ base from its boat-building facility in Albany in mid-October.

Maybe there was a hiccup and Te Aihe had already been decommissioned and they did not want to split the shore team up so they could focus on resolving the issue with boat two? Irrespective of the reason, the delayed launch and lost sailing time is not fatal, but not ideal either.

3. TNZ saw the new boats from the challengers after they were launched and decided that one or more of the design features were impressive or a potential break-through. As a consequence, they analysed the design for a week or so then incorporated some or all of it into their new boat.

The most radical of the new boats is clearly Team INEOS UK. The extreme nature of their longitudinal keel, the “bustle” towards the stern and the entire package, is pretty out-there. TNZ will have been very curious and taken some time over their response.

The wide and flat areas aft are an interesting change and in some ways reminiscent of the first boat effort from Team INEOS which many observers thought was way off the mark design wise. It’s an approach the British have moved away from with their second boat, but TNZ must see some benefit in such a wide, flat and angular back third of the hull.

Overall, what we are seeing is a conversion of ideas from all four design teams in these second boats with a real focus on aerodynamics and especially the air to water surface interface.

It seems to me that TNZ want to fly close to the water surface, especially in the bow. The flared feature suggests this will be their approach and they have learned that this is the fastest way to sail these monohulls. They will not worry if the bow is hit by occasional waves and kisses the surface regularly because the flared design feature will dissipate the water efficiently.

Flying low seals off the gap between the water surface and hull and this is aerodynamically more efficient. All the teams have learned this, but TNZ has incorporated this approach most obviously in their hull design.

Of the four new boats, Team INEOS UK is the most radical and the biggest departure from their first design. Team NZ’s design is quite advanced from boat one, but doesn’t not seem so extreme because we have seen the other boats.

American Magic’s boat two is different but not radical when compared with the British and Kiwi designs. Luna Rossa’s second boat is the least radical. It looks much more conservative now we have seen the other three. However, consensus is they got a lot right with their first design.

So, what do I think of the Kiwi team’s new boat? I like it. It looks like a good step forward incorporating key learnings from the sailing and development of Te Aihe and Te Kahu but also some convergence with features the other competitors have found to be fast.

It is important to remember we can’t see things such as systems and adjustments for rig, sails, foil control and the ability to mode the boat for a range of conditions.

I’m really looking forward to watching Burling and the sailing team putting their new toy through her paces and especially the sailing style they adopt. Having a great design is only one part of the puzzle. How the sailing team develops the entire package to get the best out of it now becomes the focus.