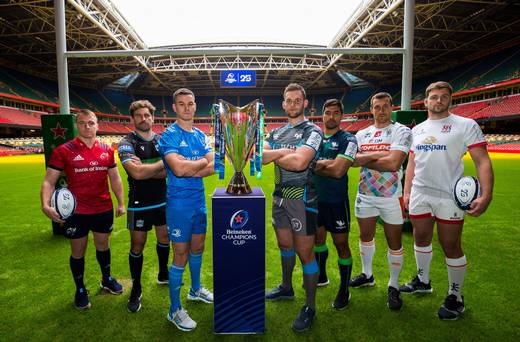 Alan Quinlan: 'Plight of The Ospreys sums up the sorry state of Welsh club rugby'

We had spent the entire week listening to people from the outside banging on about how good this star-studded Ospreys team were and how they were coming to Thomond Park to do a job on us. It was music to our ears.

As defending champions, in front of our home crowd, we didn’t need any extra motivation, but we were really riled up that week.

Channelling that frustration in the right manner is always a tricky balance, yet we got it spot on that day and the Ospreys felt the full brunt of it.

You shouldn’t be beating a team 43-9 in a Heineken Cup quarter-final, but before a ball was even kicked we knew we were in good shape in that 2009 encounter.

We never feared going to Wales, and I mean that respectfully, so why would we fear them coming to Limerick?

The Ospreys had most of the Wales team playing that day as well as the likes of Tommy Bowe, Marty Holah and Filo Tiatia. We still managed to blow them away.

Most of the Ospreys teams that I played against over the years were full of big names, but we always felt that they were vulnerable, which invariably led to us beating them more often than not. That shouldn’t have been the case when you consider that at different times they had world-class players like Justin Marshall, Jerry Collins, Marty Holah, Ryan Jones, Shane Williams and Alun Wyn Jones.

We looked at them as the Chelsea of rugby, in the way that they would bring in players from all over the world. That was all well and good but you have to have that togetherness to want to fight for the guy next to you.

I compare that to when we used to play Neath in The Gnoll. We never got an easy ride over there and at times came away with our tails between our legs, which came on the back of guys being fueled by that passion and pride to represent the jersey they were playing in.

Looking at the Ospreys in recent years, I don’t get that same sense. The regional concept of Welsh rugby only came in around 2003 and although the Scarlets recently pushed on and won a PRO14 and made a European semi-final, the Ospreys have gone in the opposite direction since they won the league in 2012.

We never felt overly concerned travelling to play at the Liberty Stadium. It was all relatively new and not a hostile atmosphere, which meant that we could unsettle them and get into our flow. I grew up watching Welsh rugby and I loved the passion and the pride that they had every time they pulled on the jersey.

When I started out with Munster and played Cardiff in the European Cup, it was a daunting task because they had so many top-class Welsh internationals playing for them. And, as the years went on, I remember playing against Wales and thinking: ‘Jesus, these are not the same players I played against for their clubs.’

It was similar to going to France and playing a French team in Thomond Park. They were two very different challenges and I always got that impression when it came to Wales too. We could beat a French team convincingly at home and then go and get walloped the next week over there. The Welsh players had that same ability when they came together as a group.

It goes right back to what Rob Kearney famously said in Enfield when he claimed that Munster players were more passionate playing for Munster rather than Ireland.

Maybe there is some truth in the fact that the Welsh players are more passionate playing for the national team rather than the regions. Perhaps Wales need their Enfield moment in reverse to get that buy-in.

The Scarlets have shown signs of life and if other regions could follow suit it would be a massive boost to Welsh rugby.

At the World Cup Wales got to another semi-final. The Welsh regions barely fired a shot last season, especially in the Champions Cup, yet the national team went well on the back of winning the Grand Slam.

It was very interesting to hear Warren Gatland speaking on ‘Off The Ball’ during the week about how some of his Welsh players were envious of the Irish provinces’ success and how they used that as motivation.

That would have been the way we viewed it in my playing days, so to hear Warren admitting that was a fascinating insight.

Ultimately, not everyone has bought into regional rugby in Wales, which is a major issue in terms of getting supporters in the gate and generating finance. How often have we seen half-empty stadiums?

The Ospreys represent several different clubs in and around the Neath/Swansea area. It is similar to the transition that we had over here when Irish guys were no longer allowed to play for their All-Ireland League (AIL) clubs.

The regions were introduced to follow a similar model to what the IRFU have introduced, but it hasn’t always clicked. Last year, the WRU had a record turnover of £97million, which was a 30 per cent increase from the previous year of £74.9m. That allowed direct funding of £20m to the regions – £5.3m of which went to the Ospreys, by all accounts.

It’s important to remember that not that long ago ‘project reset’ threatened to merge the Ospreys with the Scarlets, while there were serious doubts about the Dragons too.

The Ospreys would have effectively been lost forever and since then finances have been really tight. They are probably £1m under-resourced from where they were a few years ago, which has huge ramifications and I have sympathy for them.

Alun Wyn Jones, Justin Tipuric and George North aren’t playing for their Champions Cup opener at home, which sends out a terrible message to the supporters who are paying their hard-earned money to see the best players.

I could never imagine that happening in Ireland, but I do understand Wales got to the World Cup semi-final and people are being managed on an individual basis, but there has be a better balance.

The Ospreys have hit rock bottom and last week’s defeat to the Kings summed up the sorry state that they find themselves in.

On the 2009 Lions Tour, the Ospreys ended up with seven players in the squad. At one stage there were 13 Ospreys on the starting Wales team. The last few years have been a remarkable fall from grace.

Munster have to keep the focus on themselves, and must look to take advantage of the Ospreys’ problems. For Munster to have any sort of ambition to get out of the pool, they have got to be ruthless and go there and not alone win, but go for the bonus point. That said, Europe can do strange things to players, especially if teams underestimate their opposition.

The Champions Cup would be boosted if the Welsh regions were more competitive, but the fact that none of them have ever mounted a serious title challenge, sums up the position Welsh club rugby finds itself in.

Some Welsh people may argue that getting to a World Cup semi-final is a better proposition, but with the club game struggling, there must a better way.