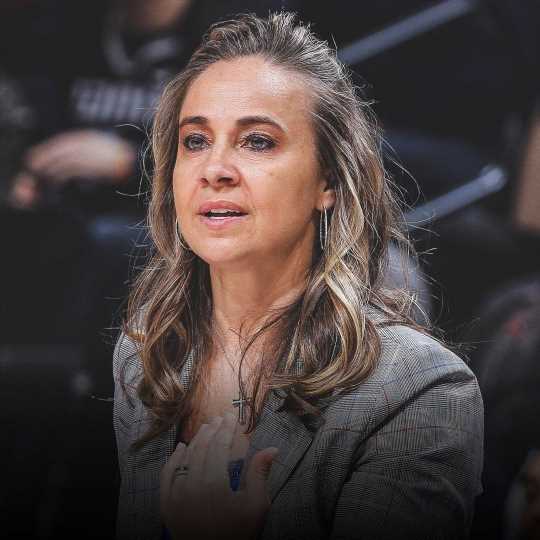 The Las Vegas Aces’ Becky Hammon was named 2022 WNBA coach of the year, the league announced Friday, making her the first former WNBA player to win the award in her debut season as head coach.

The No. 1 seed Aces, whom Hammon guided to a 26-10 regular season finish, take on the No. 4 seed Seattle Storm in a best-of-five semifinal series beginning Sunday. Vegas is hoping to earn a franchise-first WNBA title after advancing to at least the semifinals each of the previous three years under Bill Laimbeer.

If the Aces win the title, Hammon would become the first first-year head coach to win a WNBA championship since Van Chancellor did it with the Houston Comets in the league’s inaugural season.

Following the departure of Laimbeer this past offseason, Hammon came in eager to implement a pace-and-space, read-heavy offense featuring a barrage of 3-pointers, a far cry from Laimbeer’s more old-school approach predicated on getting the ball into the post. The Aces thrived under the new style: Hammon’s 9-1 start to the regular season signified the best 10-game start to a head coaching career in league history, and the team’s .722 regular-season winning percentage is the third-best in franchise history. Hammon also guided the Aces to winning the second annual Commissioner’s Cup Championship Game last month, 93-83 over Chicago, while also leading Team Wilson to victory in the 2022 All-Star Game.

Along the way, Vegas’s new offense has broken a slew of WNBA records: They hit the most 3s in any WNBA game last week with 23 in Vegas’ first-round matchup against the Phoenix Mercury, and their 90.4 points per game marked the third-highest scoring average in league history, and highest since 2010.

Hammon’s starting five – A’ja Wilson, Jackie Young, Chelsea Gray and former reserves Kelsey Plum and Dearica Hamby – emerged as one of the most lethal lineups in the league. Four of the five were named All-Stars earlier this season, including MVP candidate Wilson, Most Improved prospect Young and expected all-WNBA selection Plum, while Gray got her due when named MVP of the Commissioner’s Cup championship game.

Hammon’s storied WNBA playing career spanned 16 seasons, including eight with the San Antonio Silver Stars, the precursor to the Aces prior to the franchise’s move to Vegas. She was recently named one of the 25 greatest players in league history. After her playing career concluded, Hammon served as an assistant coach for the San Antonio Spurs for eight seasons, where she became the first full-time female assistant in NBA history.