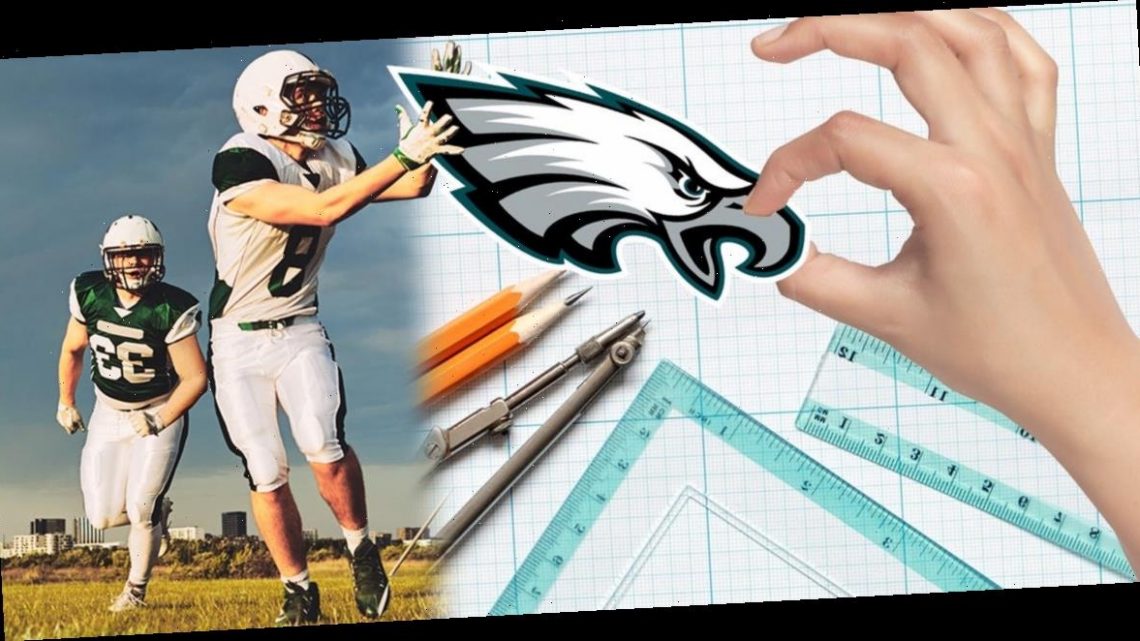 Following is a transcript of the video.

This is the logo for the sports teams at the University of Arkansas at Pine Bluff. At first glance, all you see is a lion. But take a closer look. You'll find the lion's mane has "UAPB" in it.

Sports logos often go through multiple periods of rebranding before they're worn by thousands of fans on hats, jerseys, and just about anything that showcases their loyalty.

One of the most iconic sports logos today is the Olympic rings. The logo was designed in 1913 by Pierre de Coubertin, the founder of the International Olympic Committee. He wanted the five rings to represent the five continents at the time: Europe, Asia, Africa, Oceania, and the Americas. The blue, yellow, black, green, and red rings combined with the white background were meant to represent the colors of the flags of every country at the time. Blue and yellow made up Sweden. Red and yellow made up Spain and China. Tricolour flags like the US, Italy, Australia, and Germany were represented as well. The Olympic Rings officially debuted at the 1920 Summer Olympics in Belgium.

French designer Joel Guenoun used a playful brush script to spell out the event name. The word "tour" reveals a cyclist. The O makes up the back wheel of a bicycle and the U is the seat. The R is a riding cyclist. The additional yellow circle represents the yellow jersey awarded to the winner of each stage of the race. The logo officially debuted in 2003 to celebrate the race's 100th anniversary.

The Falcons' logo hasn't changed much over the years, with only a few different color combinations and small changes in design. At first, you can just see a flying falcon. But when you look closer, the shape of the falcon takes on the form of the letter F.

This technique is very similar to another popular football team's logo: the Philadelphia Eagles. The logo also features a bird designed to vaguely outline the letter E. But it's so blended into the eagle's feathers that it's more of a hint to the team's name than a direct design element.

The Houston Rockets' very first logo featured a player wearing a rocket pack while twirling a basketball. With each logo change, the Rockets had very different designs and color schemes. The most recognizable version was unveiled in 2003. It was designed by Academy Award-winning costume designer Eiko Ishioka. It features an R made of a rocket ship. Ishioka closely modeled the design after an actual rocket on a launch stand.

The Brewers also went through many logo changes since the team was established in 1969. In 1977, a student named Tom Meindel won a competition to design the baseball team's logo. The Brewers used the logo from 1978 to 1997. It depicts a lowercase "m" and "b," which form a catcher's mitt holding a baseball in the center. The Brewer's current logo features an uppercase M underlined by a head of barley, which represents Milwaukee's beer-making industry.

Over the years, the Washington Capitals underwent several rebranding phases. The hockey team's original colors were red, white, and blue, and their logo spelled out their name with six stars above it and a hockey stick representing the letter T. In 1995, the Capitals introduced a bald eagle logo with a blue, black, and bronze color palette.

Then, in 2002, they changed the logo again to feature the Capitol building. In 2007, the Capitals returned to their original red, white, and blue colors. The new main logo pays homage to its original look, while their alternate logo has a unique design, shown on the team's jersey sleeve. It may look like just a bald eagle, but the empty space is an outline of the Capitol building.

Arizona Diamondbacks
The Diamondbacks went through a lot of rebranding since they started playing for the MLB. The team's original colors were purple, teal, and copper. They changed them to Sedona red, Sonoran sand, and black to represent areas in Arizona.

The red shade was named after a sandstone canyon at Red Rock State Park near Sedona, and the sand shade was named after the Sonoran Desert. Their most unique design was the alternate logo used from 2007 to 2015. A lowercase "d" and "b" formed the shape of a snake's head…specifically a diamondback rattlesnake.

This logo is the shape of a bear's head with the Minnesota landscape. Pine trees fill most of the head and a sun makes up some of the ear's outline. A river makes the shape of the mouth. The bear's eye is the most meaningful message of the logo. It's meant to be the North Star…but it doesn't pay homage to the actual North Star.

Washington State University's athletics team logo uses text to create a unique visual.  Art student Randall Johnson created the first cougar logo in 1936. The design came after Johnson's boss said the school needed a trademark. They both wanted to incorporate a cougar and the WSC initials, which stood for Washington State College.

The W and S created the cougar's head, and the C shaped its snarling mouth. Johnson turned the C into a U when Washington State became a university in 1959.

EDITOR'S NOTE: This video was originally published in October 2019.

Bride slammed as ‘rude’ after putting her wedding guests into A, B & C categories of importance
World News