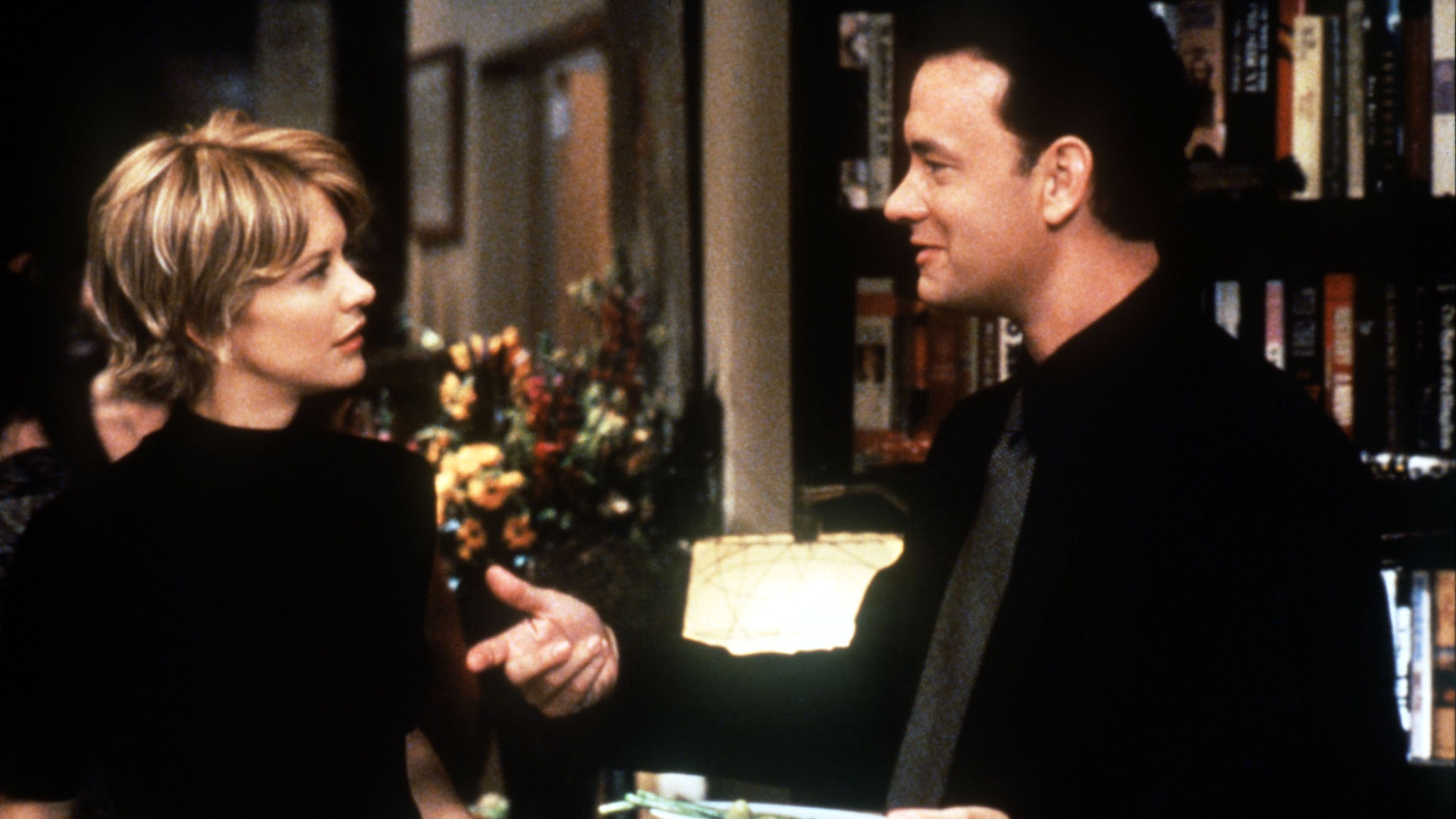 ‘You’ve Got Mail’: 20 best quotes for the film’s 20th anniversary 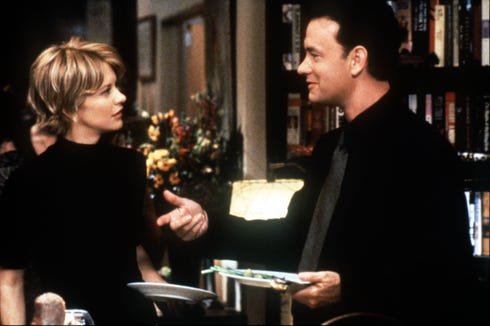 Tom Hanks and Meg Ryan in a scene from "You've Got Mail"… and now you have the AOL dial-up sign-on sounds in your head. (Photo: BRIAN HAMILL/WARNER BROS.)

Twenty years ago on Dec. 18, sitting in a theater that likely had a buttery scent in the air, audiences took in “You’ve Got Mail.”

Kathleen Kelly (Meg Ryan) and Joe Fox – F-O-X – (Tom Hanks) developed an online friendship and that eventually led to true love, despite being competitors in the cut-throat book business, in a world created by rom-com icon Nora Ephron and her sister Delia, with inspiration from Miklós László’s play “Parfumerie.” At the time, the red notification of yesteryear from AOL produced just as much excitement.

It’s the kind of movie that wouldn’t be the same if made today. Would the title tragically be “You’ve got a DM”? Where would the leads have met, if not in an “Over 30” chat room where they both claimed to have never been before? The Over30 subreddit?

Like other rom-coms – “Serendipity” and Ephron’s “Sleepless in Seattle” for example – part of the “You’ve Got Mail” plot depends on anonymity. Today that rules out the possibility of exchanging emails because whose Gmail doesn’t include their whole name? Let us also ponder how Joe would even put Kathleen out of business with Amazon presumably breathing down Fox Books’ back – despite their seductive cappuccino.

Yes, a “You’ve Got Mail”  made in 2018 may very well be a return to sender, but thankfully we still have the movie as it was and these unforgettable quotes, which still live with us in the present.

In no particular order, here are the 20 best quotes from the film in honor of its 20th anniversary:

1. Kathleen thinking of her email friend: ” ‘What will NY152 say today?’ I wonder. I turn on my computer. I wait impatiently as it connects. I go online, and my breath catches in my chest until I hear three little words: ‘You’ve got mail’. I hear nothing. Not even a sound on the streets of New York, just the beat of my own heart. I have mail. From you.”

2. Joe to his pen pal: “Don’t you love New York in the fall? It makes me wanna buy school supplies. I would send you a bouquet of newly sharpened pencils if I knew your name and address.”

3. Christina (Heather Burns) warning her boss, Kathleen, against cyber sex: “Don’t do it, ’cause the minute you do, they lose all respect for you.”

5. A frustrated Kathleen to Joe: “Whatever else anything is, it ought to begin by being personal.”

6. Joe to his colleague and friend Kevin (Dave Chappelle): “Kevin, this woman is the most adorable creature I’ve ever been in contact with, and if she turns out even to be as good-looking as a mailbox, I’d be crazy not to turn my life upside down and marry her.”

7. Patricia (Parker Posey) thinking of what’s really important while trapped in an elevator: “If I ever get out of here, I’m having my eyes lasered.”

8. Joe: “The whole purpose of places like Starbucks is for people with no decision-making ability whatsoever to make six decisions just to buy one cup of coffee. Short, tall, light, dark, caf, decaf, low-fat, non-fat, etc. So people who don’t know what the hell they’re doing, or who on earth they are can – for only $2.95 – get not just a cup of coffee but an absolutely defining sense of self: Tall. Decaf. Cappuccino.”

9. Frank (Greg Kinnear), flustered, to a television host during a flirty interview: “Thank your.”

11. Kathleen to Joe at a party: “You’re taking all the caviar? That caviar is a garnish!”

12. Frank giving his girlfriend a pep talk: “Kathleen, you are a lone reed. You are a lone… reed, standing tall, waving boldly in the corrupt sands of commerce.”

13. George (Steve Zahn) in Kathleen’s bookstore: “This place is a tomb. I’m going to the nut shop where it’s fun.”

14. Kathleen reflecting on her closing store: “It’s a lovely store, and in a week it will be something really depressing, like a Baby Gap.” 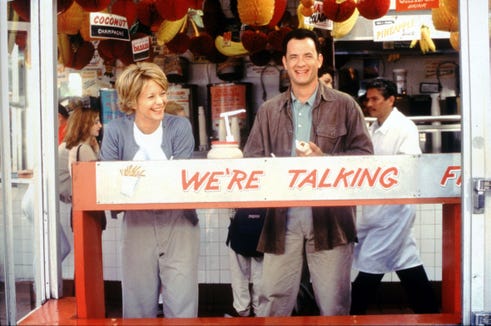 On their way to happily ever after. (Photo: BRIAN HAMILL/WARNER BROS.)

15. Kathleen thinking about her late mom: “Do you know that Joni Mitchell song? ‘I wish I had a river I could skate away on?’ It’s such a sad song, and not really about Christmas at all, but I was thinking about it tonight as I was decorating my Christmas tree, unwrapping funky ornaments made of Popsicle sticks and missing my mother so much I almost couldn’t breathe.”

16. Kathleen reflecting on her emails with Joe: “I just want to say that all this nothing has meant more to me than so many somethings.”

17. Kathleen to Frank when they are breaking up: “… There is the dream of someone else.”

18. Joe wondering if things would’ve turned out differently if he met Kathleen under other circumstances: “I would have asked for your number, and I wouldn’t have been able to wait 24 hours before calling you up and saying, ‘Hey, how about – oh, how about some coffee or, you know, drinks or dinner or a movie… for as long as we both shall live?’ “

19. He continues: “Well, let me ask you something… How can you forgive this guy for standing you up and not forgive me for this tiny little thing of putting you out of business? Oh, how I wish you would.”

What date is Mummer’s Day 2018, what’s the Cornish festival about and why is it controversial?