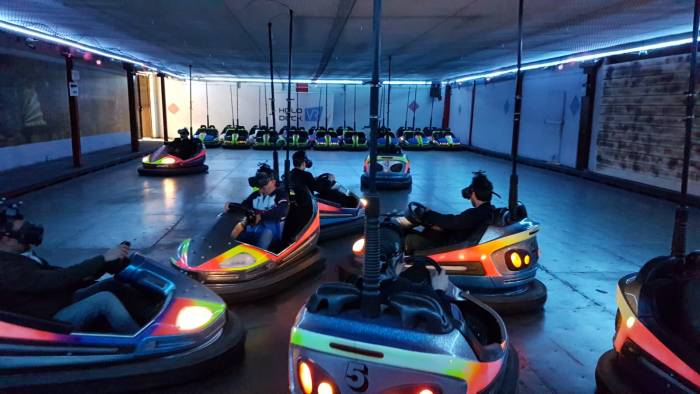 The world’s first virtual reality bumper car attraction, Steampunk VR Scooter, was unveiled in Germany earlier this month, according to a press release.

The attraction came to Erlebnispark Schloss Thurn theme park in Nuremberg on April 13, a combined effort from Qualisys and HolodeckVR— the latter working with VR Coaster to make use of unique VR capabilities, such as the perceived speed being far faster than the actual speed of the cars, according to the press release.

In Steampunk VR Scooter, the players get to enjoy bumper cars in an expansive virtual world, competing against other players and robotic enemies that can be defeated by joining forces or “taking advantage of the many extras and upgrades” scattered throughout the game.

Players get a far different view from reality when within the game: Bumper cars appear as steampunk-styled vehicles, and players will encounter cliffs and abysses in the virtual environment.

“The vision of VR bumper cars has been in our heads for a long time, and our tests from last year showed what is possible,” said Dr. Stephan Ott, co-founder of HolodeckVR. “Qualisys mocap technology was the missing piece in the jigsaw. With their support, Steampunk VR Scooters has become a reality and changed the traditional bumper cars experience forever.”

Qualisys has a multiple camera setup for the bumper cars, a Miqus mocap, “daisy-chain” setup which allows tracking of 80 targets inside of a “demanding” VR environment.

“This is a fantastic achievement for HolodeckVR, VR Coaster and everybody at Erlebnispark Schloss Thurn,” said Holmberg. “We are delighted to be a part of this groundbreaking new technology, and it shows that Qualisys continues to make great strides in the entertainment and VR sectors.”