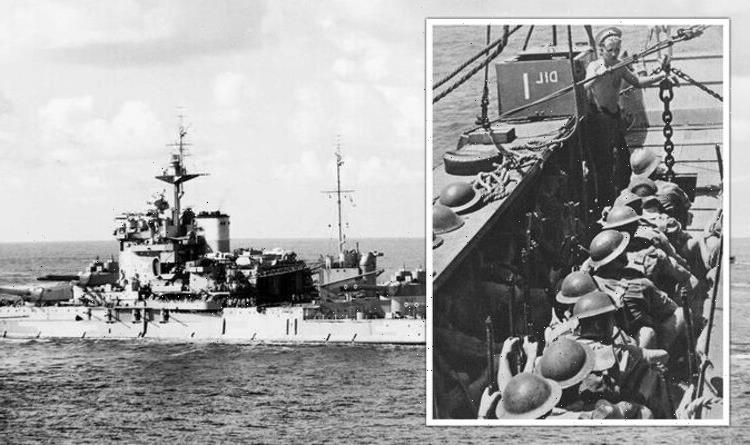 Britain is watching closely as nearest-neighbour France readies itself for the second round of voting in its presidential election. Incumbent Emmanuel Macron will fight Marine Le Pen in the run-off, as the 39-year-old appears to have won a convincing first round victory with most of the votes counted. Far-right candidate Ms Le Pen entering the Élysée would prove a seismic result for much of Europe. She has softened her image somewhat, having rebranded the National Front to the National Rally since her last attempt at taking the top job.

Britain, which enjoys a largely good relationship with France, is watching anxiously to see which way France votes in the second round of polling on April 24.

However, relations have not always been so pleasant, as Allied forces actually fought against the French in World War 2, who they had previously fought with before the Nazi takeover.

Next month marks the 80th anniversary of the Allied campaign to capture the island of Madagascar.

Nazi Germany and Imperial Japan were two of the global superpowers, alongside Italy, in the Axis alliance.

While they were officially partners, their coordinated efforts proved few and far between.

Both had their own plans for the French colony island of Madagascar, situated off the coast of southeast Africa.

When France surrendered to Germany in 1940, its colonies had to decide which side they wanted to take.

The Allies had heard rumours that the Vichy government was preparing to cede the island to Japan, and had also received intelligence of a planned invasion.

Britain feared the Japanese would look to use Madagascar as a submarine base, and it would also have impaired shipping routes to much of Australasia.

The Germans, meanwhile, had their own ‘Madagascar Plan’ — to forcibly relocate the Jewish population of Europe to the island, but this plan was axed after defeat in the Battle of Britain.

The amphibious assault — the first of its kind since the disastrous Dardanelles landings 27 years earlier — saw British land and naval forces quickly capture the key port of Diego Suarez.

They expected a relatively straightforward move to secure the rest of the island, but were met with fierce opposition.

The defending Vichy forces, of which there were around 8,000 troops, offered little response to the beach landings, but fought valiantly to defend the Antisarane naval base.

By the morning of May 6, 10 of the 12 tanks the British had brought onto the island had been destroyed.

Later that day, Antisarane surrendered, and substantial Vichy forces had retreated to the south of the island.

Some 109 Britons had been killed, and a further 283 injured just three days into the latest campaign, with the French suffering 700 casualties of their own.

Hostilities continued at a low level for several months as Operation Stream Line Jane — the ground operation — started with the capture of the key radio station on Vichy-controlled island Mayotte.

The Vichy Governor of Madagascar, Armand Léon Annet, attempted to gain reinforcements from the central Vichy government, but his pleas fell on deaf ears.

The Allies endured a slow, arduous mission as they encountered small-scale Vichy opposition and obstacles designed to hamper their progress too.

It was not until September 1942 that they seized Tananarive, the capital, and then the city of Ambolavo.

The last major action on Madagascar took place on October 18 in the U-shaped valley at Andramanalina.

The King’s African Rifles, a British colonial regiment, split into two and marched around the U-shaped valley, meeting Vichy troops at the rear and ambushing them.

Some 800 Vichy troops were forced to surrender.

A week later, British forces had made further gains but the elusive Governor Annet continued to evade them.

He had fled another 100 miles south, but accepted defeat after almost six months, asking for terms of surrender.

An armistice was signed on November 6, with Annet surrendering himself two days later.

Allied forces suffered a reported 500 casualties in the initial landings at Diego Suarez, with a further 30 killed and 90 wounded in subsequent operations.

Victory in Madagascar proved crucial for the rest of World War 2, and the island’s ports allowed the British to have control over the passageway to India and the Persian corridor.

Such was the island’s importance, historian John Grehan claimed in his book ‘Churchill’s Secret Invasion: Britain’s First Large Scale Combined Offensive 1942’ that the British capturing Madagascar before it could fall into Japanese hands ultimately contributed towards Tokyo’s downfall and eventual defeat.