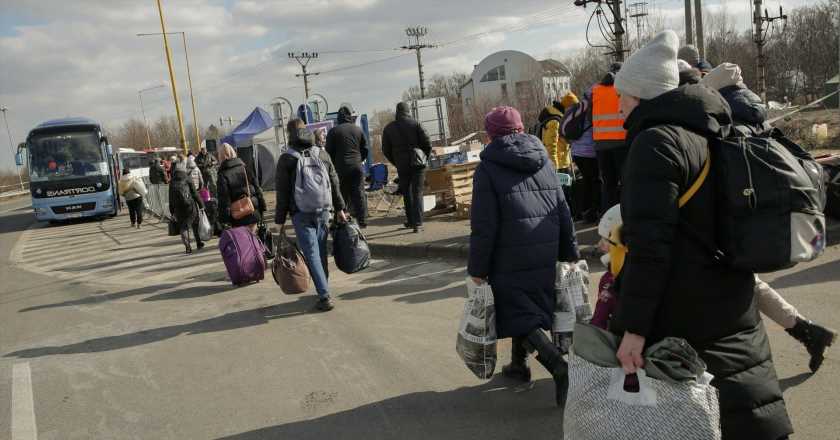 The videos provide an intimate look at what life is like for the millions of people who have fled their homes in Ukraine.

Almost one month since Russia first launched its full-scale invasion of Ukraine, women fleeing the country are turning to TikTok to share their experience of becoming a refugee.

The videos – many of which have gone viral – provide an intimate perspective of what it’s like to be one of the 3.5 million people who have now fled their homes, from the hours spent waiting for transport to the structures that have been put in place to help refugees in the nearby countries of Poland, Hungary and Romania.

One of the most prominent of these voices is TikTok user @markchrs, who has been using their platform to document life in their refugee camp in Hannover, Germany.

Alongside videos of the facilities on offer, including the toilets, showers and sleeping arrangements, @markchrs has also been sharing what it’s like to build a new life in a foreign country, including trying to return to studying and the process of learning a new language.

They’ve also been answering people’s questions about life in the refugee camp – including, for example, whether or not refugees are able to have pets with them.

Another prominent voice is TikTok user @diana_totok, a 19-year-old who fled Ukraine at the end of February and has been using the platform to document the emotional impact of leaving her friends, family and home behind.

She’s currently living in Bucharest, Romania, but has been sharing regular updates about her dad, who had to stay behind in Ukraine alongside the family’s pets.

In one of her most viral videos, Diana shares a series of snapshots of her escape from Ukraine, in which she can be seen packing her bags and driving across the country before saying goodbye to her dad and being welcomed by volunteers in Romania.

Nataly – the woman behind the popular TikTok account @chernobyl_guide – has also been sharing updates with her followers since the beginning of the war.

She made a name for herself on the platform by documenting her life in and around the Chernobyl nuclear power plant, but is now using her platform to post about the reality of the Russian invasion and update people around the world on what’s happening in Chernobyl.

She also documented the process of travelling to safety in Poland with her partner and dog – and shared how reluctant she felt to be leaving the country she loves so much.

While the war in Ukraine is far from the only conflict to be shared in the age of social media, these TikTok videos are a poignant reminder of the human impact of the Russian invasion.

For more information about how you can help refugees fleeing Ukraine, check out this article.

Playboy model paid £1,400 as an online honeytrap reveals all