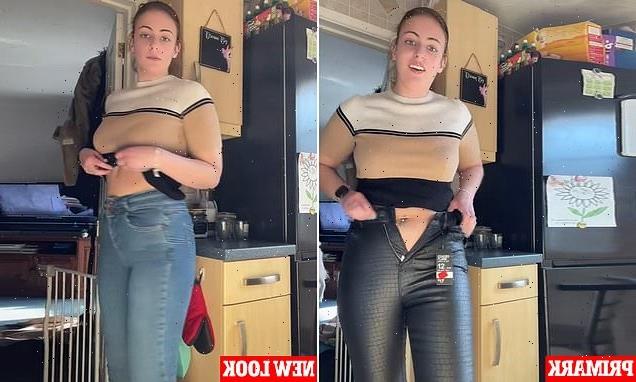 A shopper has gone viral on social media after ranting about the differences in sizing between two High Street stores.

Posting under the handle @allymarieox on TikTok, the 22-year-old, from Dorset, revealed she was unable to do up a pair of size 12 faux leather trousers from Primark,  despite comfortably fitting into a size eight pair of jeans from New Look.

Ally Marie filmed the size 12 trousers placed on top of the size eight pair to illustrate their visible differences.

Ally Marie, 22, from Dorset, has gone viral on TikTok after comparing a pair of size trousers from Primark (pictured left) to a size eight pair of jeans bought from New Look (pictured, right)

Sharing the post online, she wrote: ‘Primark this is ridiculous, no wonder people are struggling with body image #primarkuk #primarkhaul #sizingproblems #primarkfinds @Primark’

Filming herself wearing the faux leather trousers in her kitchen, Ally Marie said: ‘I’ve literally come on here with no makeup on to rant. What the hell is Primark playing at? 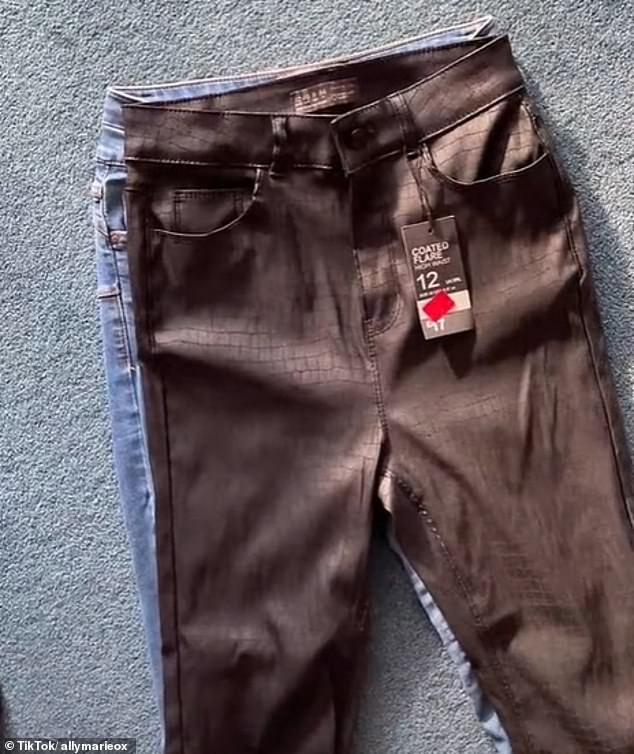 In the now-viral video, Ally placed the size 12 faux leather trousers from Primark on top of her size eight jeans from New Look to show the size difference (pictured)

‘I was wearing a size eight pair of jeans from New Look before I put these on.’

She cut to a clip wearing the jeans adding ‘these are a size eight from New Look’, before showing them laying on the floor underneath the faux leather trousers from Primark.

The short video became Ally Marie’s most watched video, racking up over 40,000 views within hours of being posted. 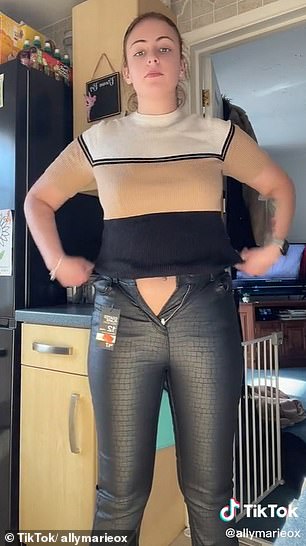 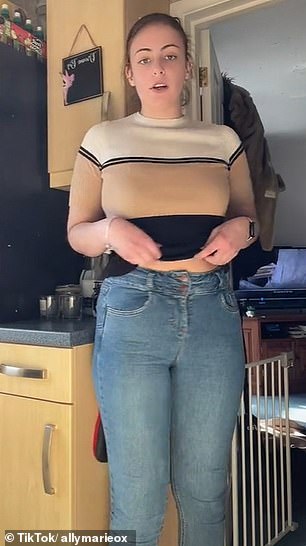 Ally said she was unable to walk in the size 12 trousers from Primark (pictured left), but wore a size eight from New Look (pictured right) despite being a size 10 in most shops

Ally Marie’s footage appeared to show a few inches difference in size between the two items, which sparked a flood of comments from people claiming they’ve had similar experiences when buying clothes.

One person wrote: ‘Primark sizes are all over the place. I have stuff in three different sizes bought all at the same time lol’

‘I literally cannot buy any trousers or jeans from Primark they never fit! I’m usually a 14-16, I have to go up for an 18 in jeans,’ another commented.

A third said: ‘They are ridiculous. I usually wear a 16.

A fourth wrote: ‘Glad I’m not the only one this has happened to! I’m normally a size 8/10 in jeans and I had to get a size 14 from Primark last week’

Another added: ‘Need to ignore the labels! even in more expensive shops.’

A Primark spokesperson told Mail Online: ‘The fit of our clothing is really important to us and we are always working with both our suppliers and technologists in our quality team to ensure consistency.

‘We continue to fit our designs using Size UK data as standard but always encourage customers to get in touch with us if they have concerns about sizing and we will happily look into their query.’

High street shops have previously been accused of posing a risk to ‘public health’ by selling clothes in the same dress size with as much as 8in difference in the waist measurements.

So-called ‘vanity sizing’ is not only confusing for customers but could also be making women overweight as they do not realise their true size, campaigners say.

While size 10 dresses in Dorothy Perkins and Topshop measure as little as 24 inches at the waist, size 10 skirts from other retailers can go up to as much as 32 inches, an investigation by journalists has found.

The sizing discrepancy across eight of the UK’s most popular women’s stores is staggering; in some, a size 10 has a waistline of 32 inches – in fact closer to a size 14 to 16.

Campaigners say vanity sizing – where shops makes their sizes bigger to flatter customers – is causing shoppers to think they are far slimmer than they are, leading them to put off maintaining a healthy weight.

Sizes are supposed to be standardised across Europe, but in reality shops have no legal requirement to comply.

A European medium should now come in between 29.3 inches and 31.4 inches – a far cry from even 20 years ago when that waist size would have been considered large.

There is British Standard for women’s clothing sizes, created in 1982 by the British Standards Institution, which gives measurements for sizes 8 to 32 – however there are still anomalies among different brands.

Research in 2004 found that women’s waistlines had ballooned six inches from the last time the nation was measured in 1951.

The Department of Trade and Industry used high-tech body scanners to take 130 measurements from 11,000 people, 50 years after the last full-scale sizing survey.