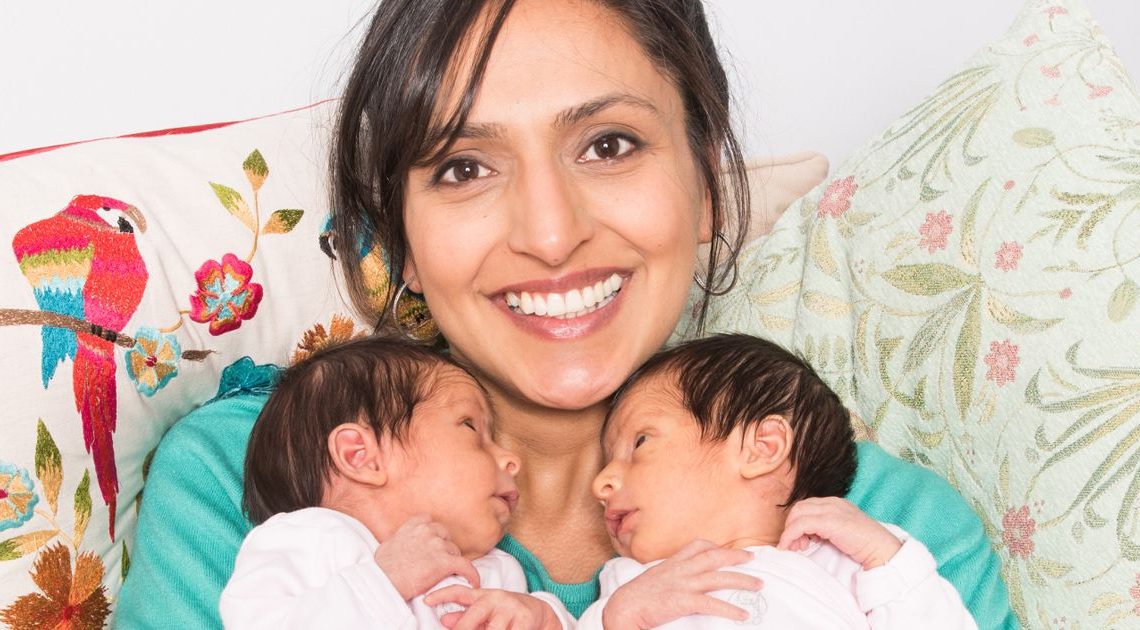 A woman who was told she might never fall pregnant has had twins – after tossing coins into Rome’s Trevi Fountain and wishing for a baby.

Monica Rana’s miraculous conception is even more remarkable when she spells out just how it came about.

At 41, she feared she was over the hill, resigned herself to a child-free life and went on a two-week cruise with a pal.

The women visited the landmark in the Italian capital, where Monica twice tossed two coins into the water, each time wishing for a baby.

Days later she had a holiday fling with a fellow cruiser.

And weeks later she discovered she had conceived not one but two babies – so BOTH of her Trevi wishes had come true.

And she is still coming to terms with the fact that she is a parent in her forties after years of trying.

The cruise ship Romeo who fathered the twins is in contact with Monica and giving her his support as she focuses on being a full-time mum.

Monica, from Medway, Kent, said: “I have always wanted children and I just can’t believe I made two wishes at the Trevi Fountain and both were granted.

“I feel blessed. I was lucky enough to fall pregnant in the first place, but to find out there were two in there was a real shock. I’m four weeks into being a mum and it still doesn’t seem real.

“I hadn’t been home from the cruise long when I started feeling dizzy, like I was still at sea.

“When the queasiness didn’t subside, the possibility of being ­pregnant crossed my mind. But with previous results I’d had from the fertility clinic, I knew I wouldn’t be.

“I decided to buy a test to rule it out completely and when I saw the second pink line appear on the stick, I was gobsmacked.”

Over the years, Monica had ­separated from partners because they hadn’t wanted children. But she thought her luck had changed when she met her last boyfriend.

She explained: “I made it clear from the beginning I wanted a family and he told me he felt the same.

“But as time went on he changed his mind, leaving me devastated and running out of time to meet the right man, fall in love and have a child with.”

It was following the split – and after tests revealed she had a very low number of ovarian follicles – that Monica’s friend Anita Bristol, 38, suggested they go on holiday.

Monica said: “Anita had been talking about going on a cruise for a while. I’ve known her for 20 years and if anyone knows how to have a good time, it’s her. I knew I was in good hands!

“On the ship, we began discussing my new life plan. We agreed to make the most of our freedom by enjoying nights out and weekends away, travelling the world and maybe even living abroad together for a while.

“We also planned to look after each other when we were older and I decided I could simply spoil my nieces and nephews, rather than have a baby of my own.”

But deep down, Monica couldn’t ignore her longing to be a mum and when the ship docked near Rome, she and Anita headed to the ancient city and saw the Trevi Fountain.

Monica glowed as she described the moment she made her wish.

She said: “I wanted to make a wish, but I didn’t have any change. Anita had some euro coins and I asked her to give me some to throw in. Thankfully she did.

“I used my right hand to toss the coins in over my left shoulder, just like the other tourists. Then I silently wished for a baby. Problem was, I wasn’t sure the coins had gone in the water, so I had to ask Anita for more.

“She couldn’t believe I was taking the last of her ice cream money! I made the same wish again and this time was satisfied the euros had gone into the fountain.”

Days later, Anita and Monica spent the evening with two men they
had met earlier on their trip.

Monica went on: “I got talking to one of the men we had been spending time with and couldn’t ignore the spark of attraction between us.

“One thing led to another and we ended up having sex. When I discovered I was pregnant weeks later, I thought back to the night me and my holiday romance had got together.

“We’d had one too many drinks – the reason we hadn’t used contraception. I knew it was foolish but at the same time I was thrilled to think I might be having a baby.”

Then came the eight-week scan… and a second surprise for Monica.

She continued: “The sonographer turned the screen around. He showed me my baby, then moved the wand slightly and said, ‘And here’s the other one’. I thought he was joking and a friend with me burst into tears, which set the nurse off crying too! I wasn’t just going to be a mum, but a mum of twins. I was so shocked.

“When I told Anita, she screeched down the phone with excitement and joked she owned the babies because the four euros I’d used to wish for them were hers! I told the father of the twins and he was really good about it.

“Despite us not being in a relationship, he said he would support me.”

After discovering she was having two girls at her 16-week scan, Monica started stocking up on the essentials.

At 37 weeks, she was classed as full-term and was induced. But when one of the placentas ruptured, she was rushed into theatre for an emergency C-section.

Non-identical twins Athena and Luna both weighed in at a healthy 5lb 5oz.

Thrilled Monica said: “When I met them for the first time and held them both in my arms, it was such a strange feeling. They were so beautiful, I couldn’t stop gazing at them.

“Two days later I turned 42 and my daughters were the best birthday presents I could ask for.

“Becoming a mother hasn’t worked out the way I always imagined it would and I know there will be tough times ahead, especially being a single mum, but I have a lot of love to give to Athena and Luna.

“I’m so grateful to Anita for giving me her money to throw in the fountain. She helped make my wish – or wishes – come true. Something she won’t let me forget in a hurry!”