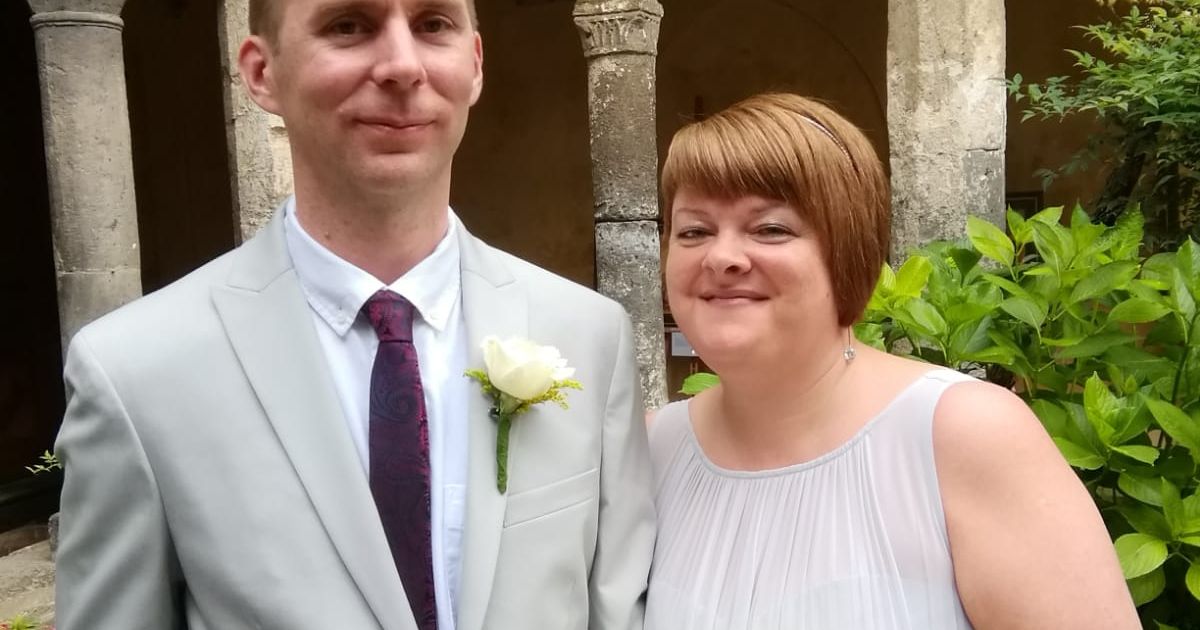 A woman whose life was thrown into turmoil two years ago with a devastating diagnosis has defied the odds to marry her partner.

Two years ago, Alison Stiles Johnson’s dreams came true when her boyfriend Michael asked her to marry him during the Christmas holidays.

But three days later she received news that was set to change her life forever.

The 44-year-old had undergone an MRI scan a few weeks before Christmas to find out what was giving her such horrific headaches, Chronicle Live reports.

And as she celebrated getting engaged, Alison received a letter telling her the mystery symptoms were a result of Chiari Malformation – meaning her brain was pushing down on her spinal canal.

The devastating diagnosis meant Alison would take on the fight of her life, undergoing a major operation to remove part of her skull and managing the condition with medication on a day-to-day basis.

Despite the pain, Alison has managed to beat the odds to have her dream wedding with Michael – and complete her Masters at the University of Sunderland .

The former nursery nurse had just started her MSc Tourity of Suvents when she started feeling ill during the autumn of 2016.

She had had a flu jab in October 2016 and began to feel unwell a few days later.

Alison said: “At first I thought it was a reaction to the injection but then it became obvious something wasn’t right. It was like someone had switched a pressure switch behind by right eye.

“I went and got my eyes checked out and they said there was nothing wrong.

“Then I started having problems with my speech and seemed to be having stroke-like symptoms with lots of headaches.”

Eventually, in November 2016, she got to see a neurologist at Sunderland Royal Hospital.

“I thought I had a tumour but they said they would send me for an MRI scan to see exactly what the problem was."

Alison, originally from Sunderland, underwent the scan just a few weeks before Christmas. Then, during the holidays her partner, Michael, 38, asked her to marry him.

“Three days later I got a letter from the hospital telling me I was suffering from Chiari Malformation, a condition where the lower part of the brain pushes down into the spinal canal,” said Alison.

“The letter said I was being referred to a neurosurgeon but that was about it, it didn’t tell me anything about the condition."

Alison underwent a consultation at Newcastle ’s Royal Victoria Infirmary (RVI) where her surgery was due to take place.

“To be honest, I didn’t take much in,” she said. “I just remember them saying that part of my brain was like a cork in my spine that needed to be pulled out.”

In March 2017, Alison underwent her operation in which surgeons removed a section of her skull, going through muscle before helping “uncork” the trapped area.

She said: “I was in hospital for five days before undergoing a three month period of recuperation at home.”

But despite the operation, Alison is far from free of the condition. Instead, it is something she has to manage on a day-to-day basis, using pain-numbing medication.

During this time, all of Alison’s studies at the University of Sunderland were put on hold, but eventually she managed to complete her Masters and graduated at the University’s winter Academic Awards at the Stadium of Light on November 30.

It was a perfect end to the year that also saw Alison and Michael get married in Sorrento in June, in front of both sets of parents.