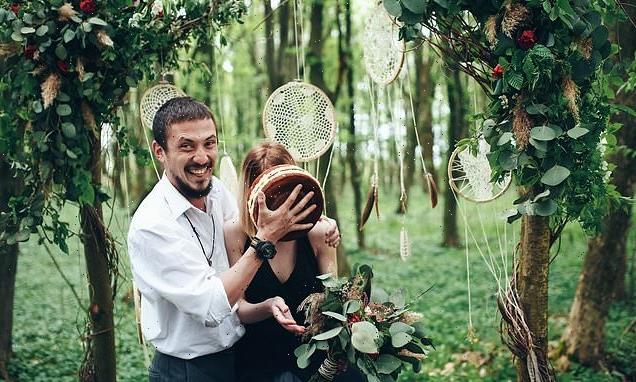 A woman has revealed how she broke up with her husband the day after their wedding because he ignored her one request and grabbed her by the back of the head to smash her face into their cake.

The woman wrote into US magazine Slate’s advice column Dear Prudence, under the moniker Give Him Til February, and explained how she got married just before Christmas but is now hoping to get a divorce or annulment before the end of January due to her husband’s disrespect.

She revealed she told him the day after her wedding that it was ‘over’ but during the Christmas holidays many friends told her to give him a second chance and not give up at the first hurdle.

Journalist Jenée Desmond-Harris who writes the Agony Aunt column advised her to continue with the divorce, and even questioned her friends writing: ‘Make a mental note about which of your loved ones don’t seem to value your happiness’. 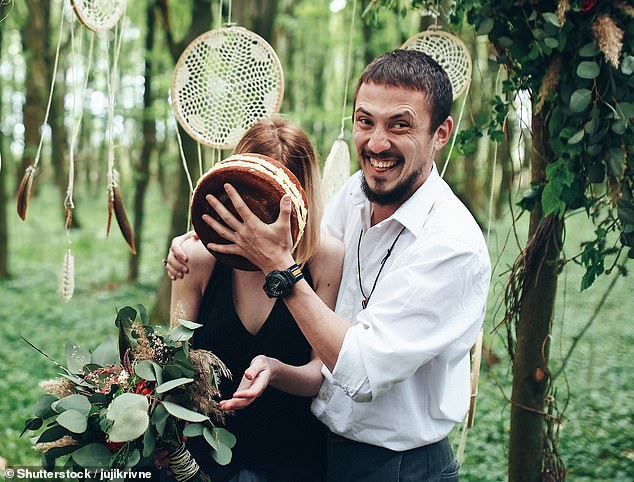 The woman wrote into US magazine Slate’s advice column Dear Prudence, under the moniker Give Him Til February, and explained how she got married just before Christmas but is now hoping to get a divorce or annulment before the end of January due to her husband’s disrespect (stock image)

The column has now gone viral, with hundreds of people shocked by the husband’s behaviour.

Give Him Til February explained:  ‘I never cared about getting married, but I wasn’t opposed to it. So when my boyfriend proposed in 2020, we decided to go for it. We each took on about half the responsibility for organising the wedding, but I think I was pretty reasonable about compromise when he really wanted something. My only hard-and-fast rule was that he would not rub cake in my face at the reception.

‘Being a reasonable man who knows me well, he didn’t. Instead, he grabbed me by the back of the head and shoved my head down into it. It was planned since the cake was DESTROYED, and he had a bunch of cupcakes as backup’.

She went on to explain how she left the next day, but over the holidays ‘everyone’ has got together to implore her to give him a second chance.

The newly-wed also questioned if she as overreacting because she’s ‘very claustrophobic’ following  a car accident and that she ‘absolutely panicked’ after being shoved into a cake.

She went on to day she ‘loves him’ but ‘doesn’t feel that at all right now’ and that her friends tell her it’s a ‘serious mistake’ to divorce so quickly.

However, dozens of people responded saying it was a ‘red flag’ and that her wishes ‘weren’t respected’. 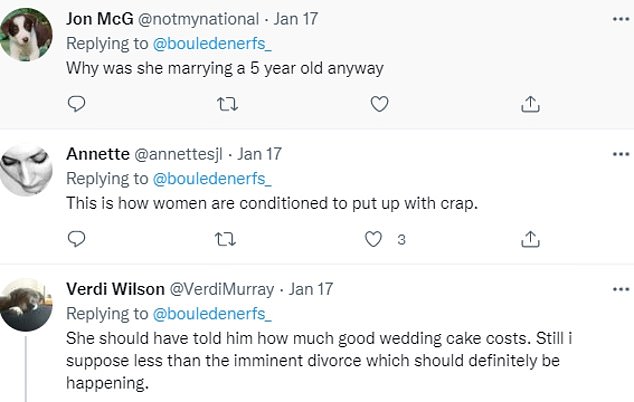 The column has now gone viral, with hundreds of people shocked by the husband’s behaviour.

‘Not cool, doubt this was his first red flag but it should definitely be the last. RUN,’ one person wrote.

‘It seems to me like him stating from the start that he doesn’t care about how she feels or what she asks for, so I’m team divorce for sure,’ added another.

‘She should have told him how much good wedding cake costs. Still I suppose less than the imminent divorce which should definitely be happening,’ said a third.

‘This is how women are conditioned to put up with c***’ commented a fourth.

‘If this actually happened she is right to divorce him and so would I. I can’t imagine thinking I need to tell the person I’m marrying not to do that, “Please do not physically assault and humiliate me at the public celebration of our love, for which I will have had my hair and makeup professionally styled and will be wearing a more expensive than normal outfit, thank you”‘ wrote another in a series of tweets.

‘She set a clear boundary and he violated it. She’s right to dump his a**,’ tweeted another.

‘If he doesn’t recognise how major the claustrophobia is for her at this early stage then he will actively not care later. Run girl,’ commented one.

‘Demonstrations of contempt are the singular best marker for a marriage headed for failure. Get that Monday-morning divorce, babe,’ said one.

‘I feel like if you set a hard line with your partner, especially about something physical, and they flagrantly and deliberately violate it in front of a crowd of people, that is what is known as a “red flag”‘ wrote another.

‘Divorce him yes but maybe also arrest him,’ said one. While another added: ‘Not just divorce. She should press charges for battery’.

Britney Spears: Justin Timberlake's Family Was 'All I Knew for Many Years'

André Leon Talley was more than just a fashion editor, and these tributes are proof
World News