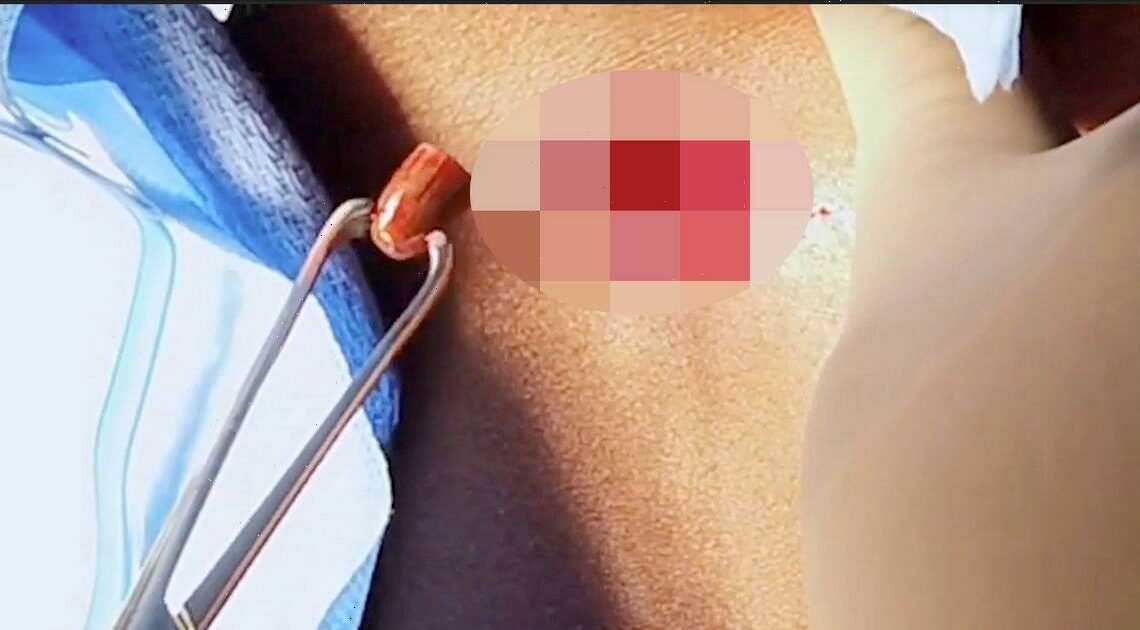 After 15 years of having it lodged in her back, a woman has finally had a bullet removed.

Nursing assistant Erica Miles was in the wrong place at the wrong time when she got caught in the middle of a shootout when she was just a teenager.

Speaking on an episode of the new US-based series Stuck on Quest Red, she opened up about the terrifying experience.

“Back in 2005, when I was in high school, after a football game my friends and I were waiting on our rides, and we end up being innocent bystanders caught in the middle of two groups of people shooting at each other,” she revealed.

“I ended up getting shot in the back, I felt the burning sensation. They said it was too close to my spine at the time and that they didn’t want to take it out.”

Every year, more than half a million people in the US seek medical attention as a result of getting something stuck in their bodies.

No matter what it is or how it got there, the challenge for medics is removing it from the body without causing the patient serious injury.

“People get shot all the time and we never remove bullets. That’s kind of a TV thing; we leave all bullets in unless they are stuck in a vessel or a joint,” he explained.

“The reason why is that you usually will cause a bigger problem going in to get it.”

And that is just what happened to Erica. An astonishing 15 years after she was shot, the bullet had shifted inside her body, nearing the surface of the skin of her lower back.

As Erica admits, something she had long forgotten about quickly turned into a scary and painful problem.

“I never felt it moving throughout the years in my back. I never thought about it, it never bothered me until the night that I felt it on the surface of my skin,” she said.

“And I knew that’s what it was. I was actually scared because I knew it shouldn’t have been in that place; it was in the top portion of my back, and it moved down to the lower portion.”

Once the bullet was finally removed, Dr Crawford then closed up the wound.

“What we are going to do is put one stitch in it just to help the healing process. But as far as closing the hole up, we traditionally just let them close up on their own,” he said.

Thankfully, after finally having the bullet removed from her back, Erica’s recovery was straightforward.

“After the surgery, the recovery was fine. I didn’t have any issues or concerns. I healed like normal. I was okay,” she revealed.

“I am so grateful to Dr Crawford; I am just glad that I wasn’t in any pain, and I was glad that the bullet was out of my back.”

Sadly, treating gunshot victims have been a common occurrence over the course of Dr Crawford’s illustrious career as a General Surgeon, and remarkably Erica isn’t the most unusual case he’s dealt with.

“Over my entire career, I have probably seen around 500 gunshot wounds and of those the strangest one is a gentleman who got shot in the head,” he shared.

“He had a bullet in the middle of his brain, and he had a little bit of blood leaking out of the hole.

“We were trying to decide if we were going to take him to the operating room and do an emergency craniotomy and this other stuff, and over the next couple of hours he woke up and was doing fine, so we left it!”

Stuck airs 10pm on Tuesdays on Quest Red and is available to stream on discovery+.

To stay up to date with all the latest news, make sure you sign up for one of our newsletters here.