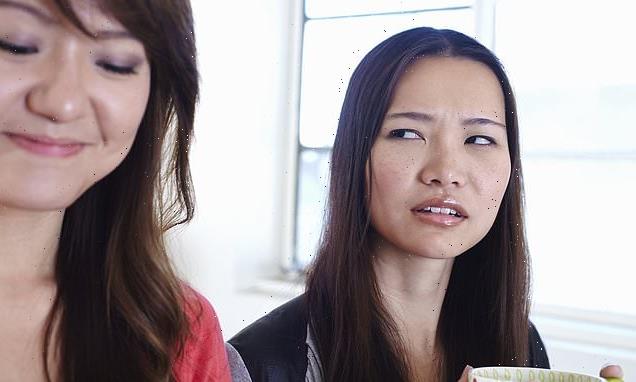 A woman has divided opinion after admitting to struggling through a holiday with a friend because because she’s ’embarassed’ by the way her pal speaks.

The British woman took to the parenting site Mumsnet, to detail how she’s been left cringeing over her friend’s overuse of words like ‘crikey’, ‘sweetheart’ and ‘bless your heart’.

Despite being friends for more than a decade, it’s only now that they’re on holiday in the US together for 11 days that it’s really started to get on her nreves, leaving her wondering how she will survive the rest of the trip.

Many people agreed it would drive them up the wall too, but others said the  colloquial turned of phrase were ‘adorable’ and said the friend sounds very much like a good-natures ‘Darling Buds of May-type’. 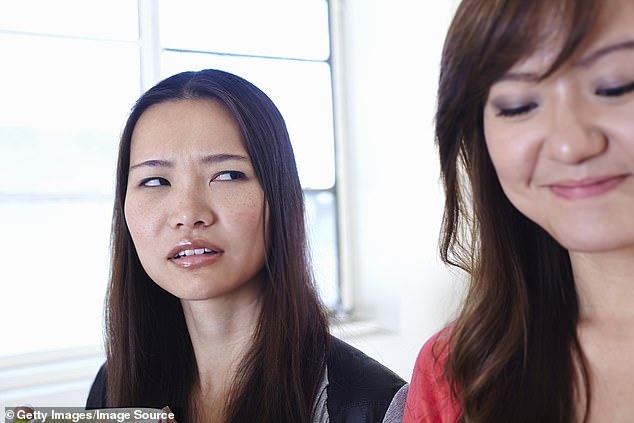 She claimed to ‘care about her friend alot’ but also said she had 11 days left of their US holiday, and was ‘unsure how to respond to her without making her feel bad’.

She said: ‘My friend is a kind and open person, we’ve been friends for ten years. We do things often together like go for drinks, or to see a film or for a meal.

‘After all these years I’m very used to her, and I do care about her a lot.

‘One thing friend does however is add a lot of filler words when she talks and repeats herself often. She will constantly say “bless you darling” or “bless you sweetie” to answer something in conversation. 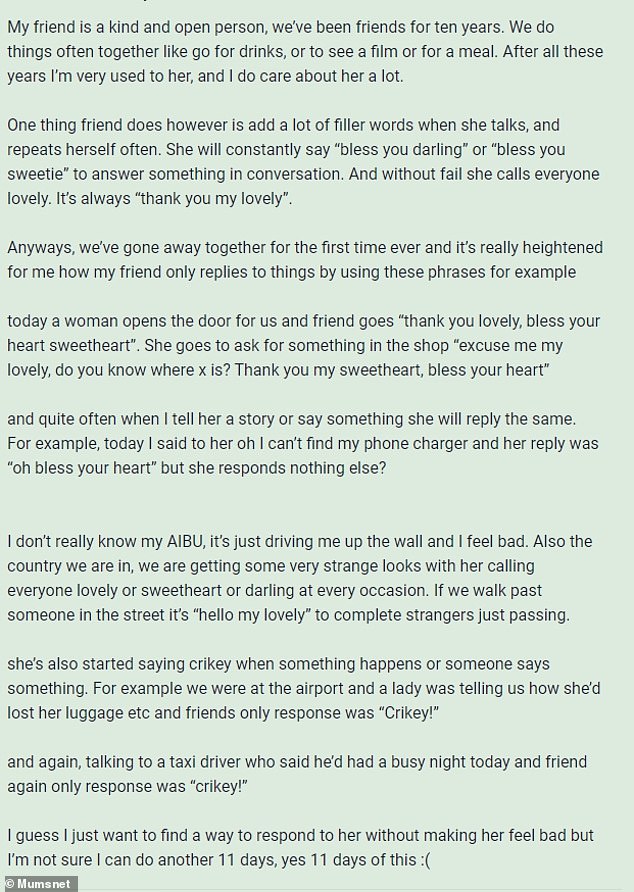 ‘And without fail she calls everyone lovely. It’s always “thank you my lovely”.

‘Anyways, we’ve gone away together for the first time ever and it’s really heightened for me how my friend only replies to things by using these phrases for example today a woman opens the door for us and friend goes “thank you lovely, bless your heart sweetheart”.

‘She goes to ask for something in the shop “excuse me my lovely, do you know where x is? Thank you, my sweetheart, bless your heart”

‘Quite often when I tell her a story or say something she will reply the same.

‘For example, today I said to her oh I can’t find my phone charger and her reply was “oh bless your heart” but she responds nothing else?’

The thread amassed hundreds of comments, with people either admitting this was something they also did, or revealing that they would secretly be cringeing too.

‘She’s also started saying crikey when something happens or someone says something,’ the anonymous poster added. ‘For example we were at the airport and a lady was telling us how she’d lost her luggage, and friends only response was “Crikey!”

‘And again, talking to a taxi driver who said he’d had a busy night today and friend again only response was “crikey!”

‘You can’t police how your friend speaks,’ some people thought that the anonymous poster had taken things to far, with many admitting they had the same habit

‘I guess I just want to find a way to respond to her without making her feel bad but I’m not sure I can do another 11 days, yes 11 days of this.’

A user admitted: ‘That would drive me bonkers!’

Another said: ‘You’ve got the ICK with her!’

‘You’re going to get a load of people telling you you’re one step away from Hitler/Putin/Satan for being so mean about a lovely, kind-hearted person,’ replied one user, ‘But yes, it does sound incredibly annoying.’

‘I hate being told ‘bless your heart’. It is so rude/patronizing/dismissive.’

Some argued that when on holiday with a close friend, something is bound to get on your nerves.

One comment said: ‘Never holiday with a friend for more than about three days. ‘There will usually be something about them that starts to utterly drive you up the wall on about day four.

‘In your situation, I would see if I could at least do a day trip apart – your holiday sounds like a very long time to be in each other’s faces 24/7!’

However many thought the friend sounded kind, with some even wondering if she worked in the care industry, saying: ‘Does she work in a caring role OP? I know quite a few that talk like that and they are all in care jobs (and beautiful people!)

‘I think it’s quite sweet.’

Others agreed, with one saying: ‘Honestly, she sounds lovely. You, on the other hand, do not.’

ICC T20 World Cup 2022: Fixtures, results and groups for tournament Down Under | The Sun
World News