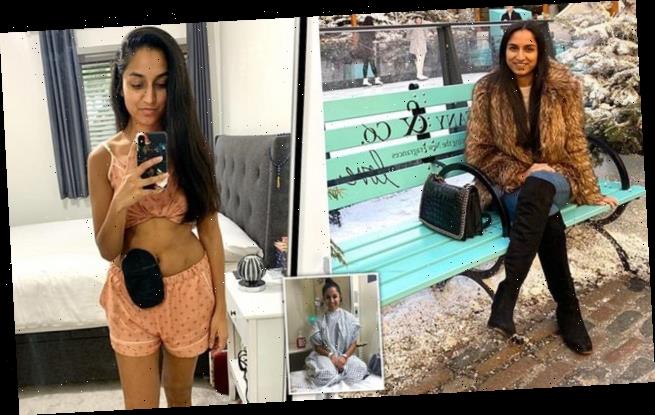 A beautiful young professional has dared to bare her ileostomy bag in a series of photographs to inspire body confidence – after a long battle with the painful condition endometriosis led to part of her bowel being removed.

Tanya Aumeer, now 28, from London, was 21 when she first started struggling with severe menstrual pain that would cause her to faint.

But it was not until May 2016 that cysts were found on her ovaries and a gynaecologist said she probably had endometriosis – where tissue similar to the womb lining grows in other places.

Eventually having a major operation last October, her case was so severe that the rogue tissue was strangling her bowel, forcing surgeons to cut a chunk away, before diverting waste from her small intestine through an opening, or ileostomy, in her tummy and into a bag. 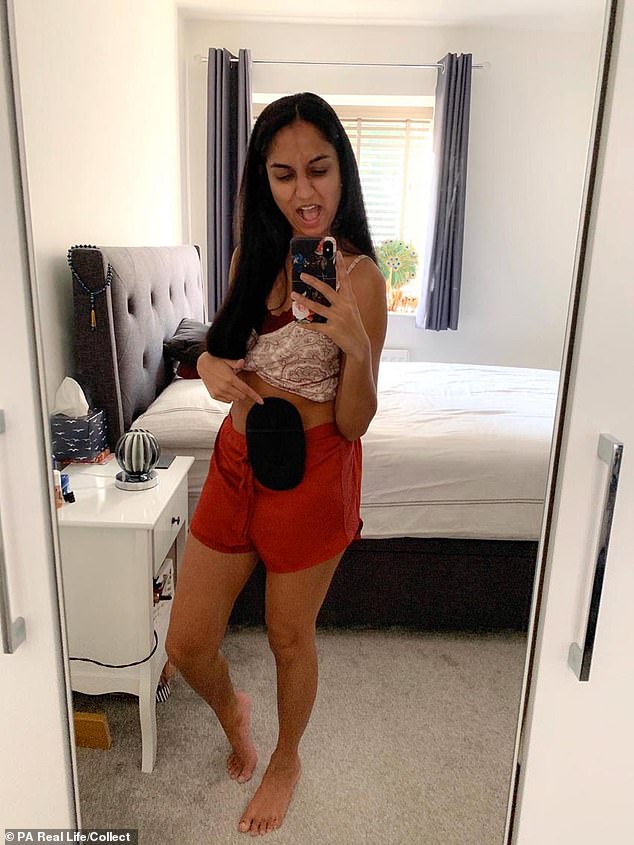 After finding cysts on her ovaries in May 2016, a gynaecologist told Tanya Aumeer, 28, she probably had endometriosis – where tissue similar to the womb lining grows in other places

Now proudly calling her bag, ‘Lola,’ the housing officer said: ‘My ileostomy was not something I was expecting, and it was a struggle at first to get used to it.

‘But I’m rocking ‘Lola’ loud and proud. It reminds me every day that I’m getting healthier and stronger.

‘I want to be a positive influence and show that even though it is a chronic illness, and an invisible one, it should be spoken about and not be seen as a taboo.’

Now, she is building a following online by documenting her battle with chronic illness, and flaunting pictures of her bag to help inspire others to be positive about their bodies. 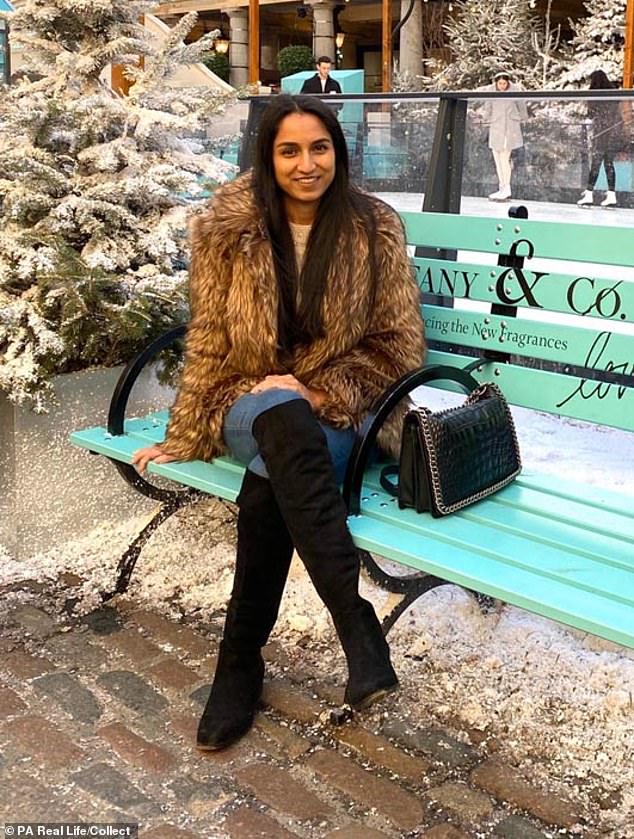 Eventually having a major operation last October, her case was so severe that surgeons had to cut a chunk of her bowel away, before diverting waste from her small intestine into a bag

Tanya first experienced symptoms of endometriosis when she was 21 and would be left doubled over in pain whenever she had her period.

‘It was like really bad cramps. It was so bad that I would faint and often I would have to call in sick to work,’ she recalled.

‘It was debilitating and meant I really struggled, but I was determined not to let it stop me living my life. I refused to just stay in bed in pain.

‘I had to carry a hot water bottle with me everywhere. People in the office got used to me having one even in the middle of summer. I even went on holiday to Majorca with one. ‘ 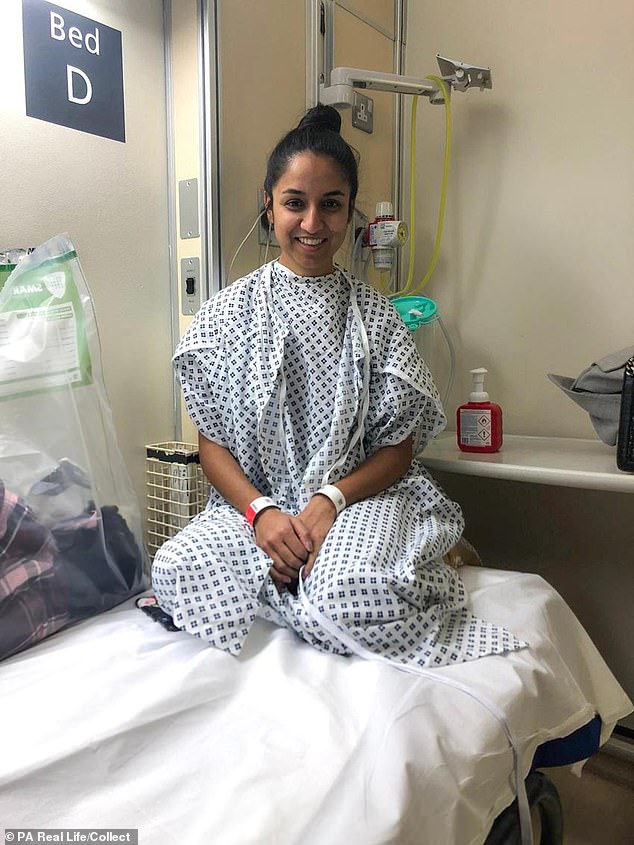 Now proudly calling her bag, ‘Lola,’ Tanya, a housing officer, of north London, said: ‘My ileostomy was not something I was expecting, and it was a struggle at first to get used to it’

Back then, she had not heard of endometriosis, which according to the NHS is a condition where tissue similar to the lining of the womb starts to grow in other places like the ovaries and fallopian tubes.

Told her severe period pain was normal by the doctor, she said: ‘I was given painkillers and would go back to be given even stronger painkillers.

‘I was told it could be irritable bowel syndrome (IBS). One doctor even suggested it would go away if I got pregnant.’

Eventually, in May 2016, she was referred to a gynaecologist and, following a scan, cysts were detected on her ovaries and she was told it could be endometriosis. 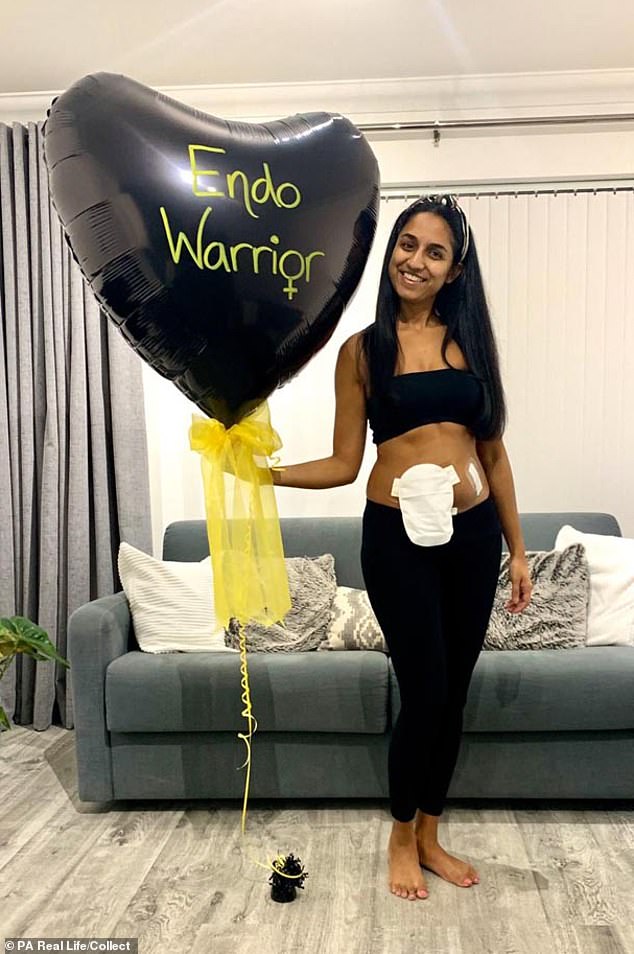 After years of struggle, in May 2016, Tanya was referred to a gynaecologist and, following a scan, cysts were detected on her ovaries and she was told it could be endometriosis

‘I was put on contraceptive pills which they wanted me to try for six months, hoping the hormones might combat it. Then I would try a different one for six months, but again it did nothing,’ she recalled.

Finally, in January 2019, Tanya was referred to an endometriosis specialist, who conducted a diagnostic laparoscopy that April – inserting a small telescope into the abdomen to look at internal tissue – and an MRI scan, leading to her diagnosis.

Her endometriosis was so severe she was first put on hormonal treatment for three months, putting her into a temporary menopause, before they could operate.

‘It wasn’t pleasant. I experienced menopausal symptoms like hot flushes and sleepless nights, waking up in the night sweating,’ she recalled.

‘My hair started to thin and I had spot outbreaks. I also gained about 5kg in weight.

‘I don’t know if I will be able to have children either because of the endometriosis. I may struggle, but if I don’t fall pregnant within six months of trying I can go back and try and get fertility treatment. I won’t know until I try to conceive.’ 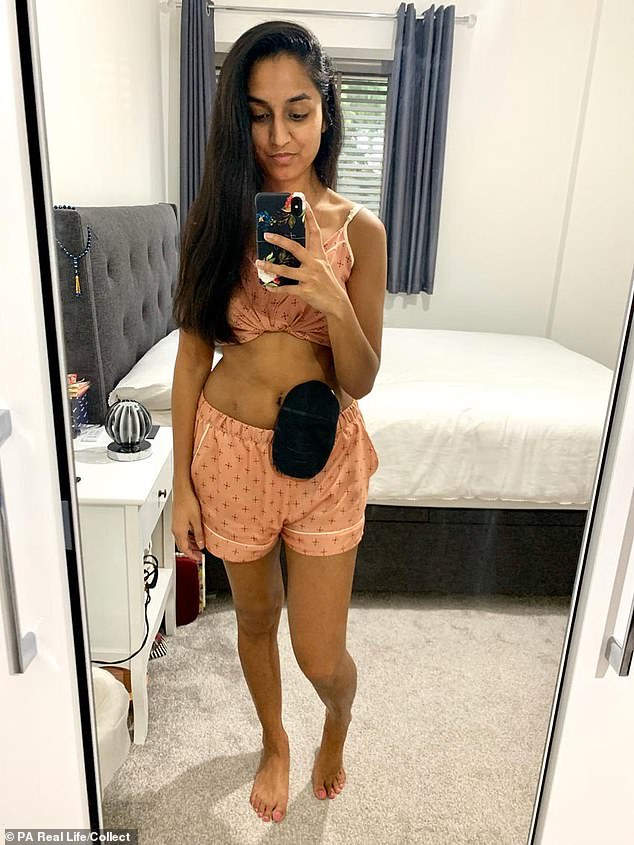 Last January Tanya was referred to an endometriosis specialist who conducted a diagnostic laparoscopy and an MRI scan, leading to her diagnosis

Then in October last year, Tanya had an eight-hour operation to cut away patches of endometriosis which had grown on her bowel, ovaries and bladder.

While it was all removed from her bladder and mostly from her ovaries, the tissue had been squeezing her bowel and surgeons had to cut away a chunk of the organ itself.

Waste from her small intestine was then diverted through an opening in her tummy and into an ileostomy bag.

‘I did not look at my body for two days. I was not expecting it at all, it was a complete shock,’ she said.

‘I quickly had to adjust and learn how to change the bags while I was still in hospital, where I remained for a week. I had to learn how to measure the stoma myself so I could cut the bag to fit it, and it can change size over time. 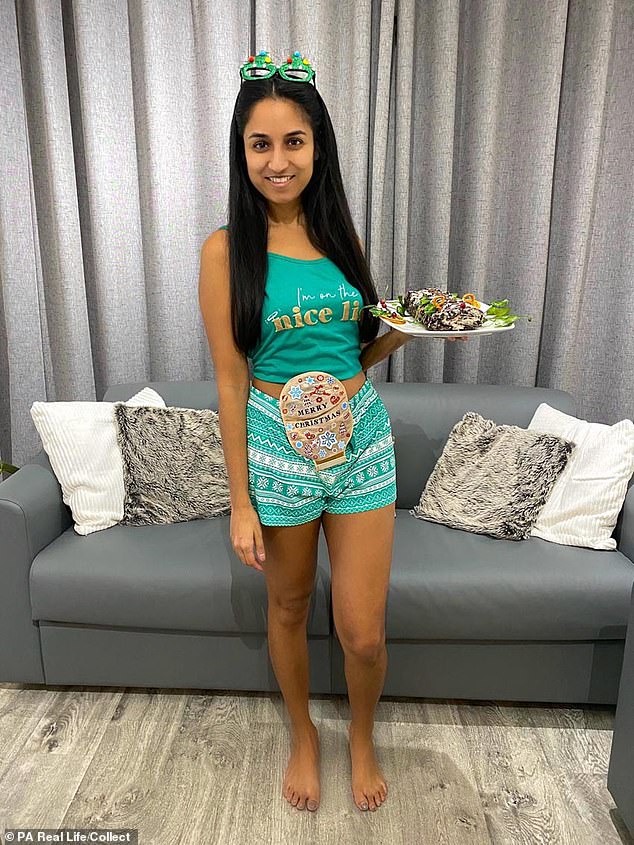 Tanya had an eight-hour operation to cut away patches of endometriosis which had grown on her bowel, ovaries and bladder

‘It’s a total lifestyle change and I didn’t have time to prepare for it. I even had to think differently about what food I could eat because at the start you have to have a low fibre diet because it can cause blockages.

‘I’m not soft-handed and I was scared about breaking the bag when I was attaching it. I wasn’t confident and fainted so many times when changing it. I couldn’t look at it, and cried many times.

‘It took a good few weeks for me to get the hang of it.

‘I had a few experiences where the bag came off too, so I’d panic and cry. Luckily my family have been really supportive.’

She may need to keep the stent for life which could mean more surgeries over the years to replace them. 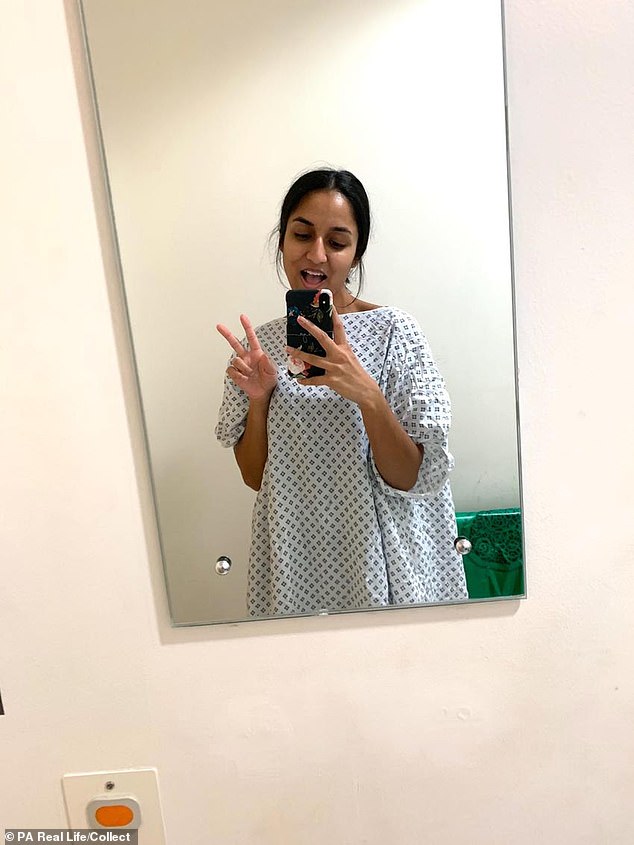 anya, who hopes to have the ileostomy reversed at some point, has found solace through social media and sharing her experience of living with a chronic illness

But Tanya, who hopes to have the ileostomy reversed at some point, has found solace through social media and sharing her experience of living with a chronic illness.

‘I had spoken about my endometriosis and connected with other sufferers on Instagram,’ she said.

‘A couple of weeks after I got my bag, I put a post on Instagram. I wanted to put myself out there and see who I could speak to about it.

‘I even gave it the name Lola as a way of giving it some identity.

‘I was flooded with messages and actually spent two to three days responding. I’ve not had any negative comments. Everyone has been so positive and telling me their stories, asking me questions about what to ask when they see the surgeon.

‘People say that I’m brave because I’ve been sharing pictures of my bag. 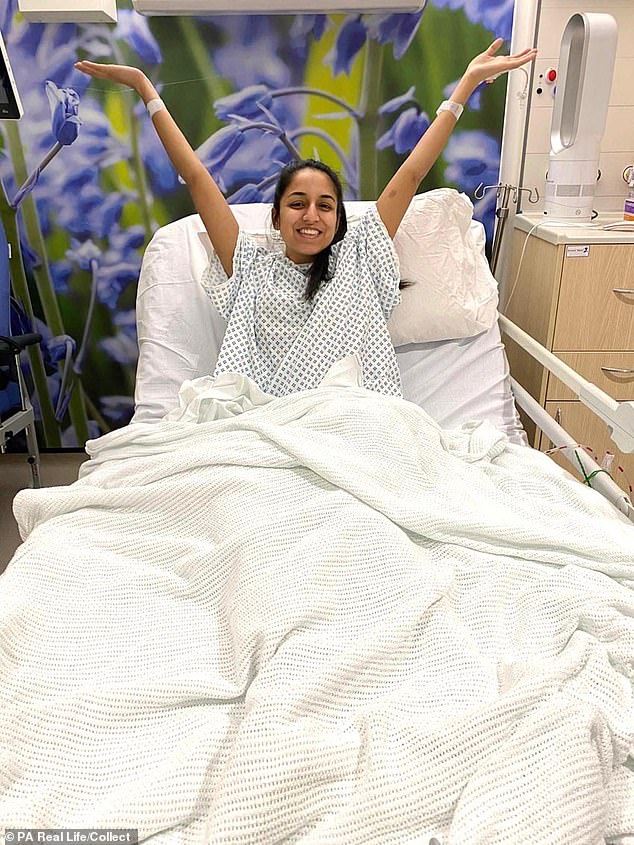 ‘I’ve made some great friends over social media, I’ve even arranged to meet some girls who have been through a similar experience,’ Tanya said

‘I’ve made some great friends over social media, I’ve even arranged to meet some girls who have been through a similar experience.’

Tanya has also been getting creative, decorating her bag with stickers and drawings to jazz it up, or using a black one instead of the more surgical looking versions.

‘It makes me happy and gives me something to focus on. It puts a positive spin on it rather than seeing it as a hindrance. It’s a powerful thing, and I don’t want to not like it,’ she said.

Endometriosis occurs when cells in the lining of the womb are found elsewhere in the body.

Each month, these cells react in the same way as those in the womb; building up, breaking down and bleeding. Yet, the blood has no way to escape the body.

Symptoms include pain, heavy periods and fatigue, as well as a higher risk of infertility, and bowel and bladder problems.

Its cause is unknown but may be genetic, related to problems with the immune system or exposure to chemicals.

Treatment focuses on pain relief and improving quality of life, which may include surgery or hormone treatment.

‘It’s my body and I choose to love it rather than hide it away. I think it’s really helped me grow in confidence.

‘I would say to others going through it keep smiling and stay strong. Keep fighting until you get your answers and to take each day as it comes.’

Currently single, Tanya has no plans to start dating anytime soon, as she is still coming to terms with what she has been through.

She said: ‘I’m still getting myself together so I’ve not thought about dating or the idea of explaining to someone else what’s going on.

‘Although the bag has caused me problems, there have been leaks and explosions, I think, “Where would I be without it?”.

‘I’m grateful that it’s allowed me to live a better life and I’ve come out the other end stronger.’