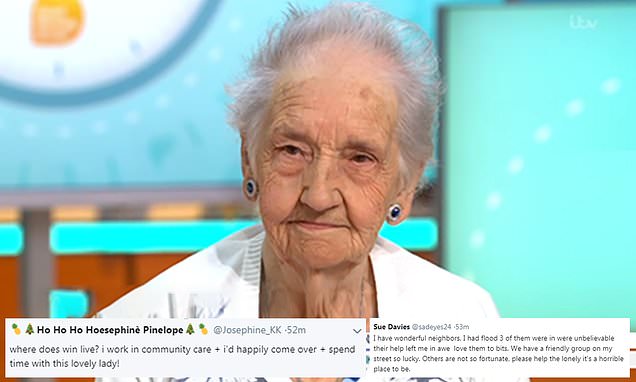 Win Hardy, 89, describes her loneliness as ‘hell’ on GMB

‘I was stuck in doors for weeks and didn’t see a soul!’ Viewers flood social media with support as pensioner, 89, describes her loneliness as ‘hell’ on Good Morning Britain

A pensioner who didn’t see another person for weeks while she recovered at home from a hip replacement has opened up about the ‘hell’ of the loneliness she experienced when her neighbours failed to reach out to offer support.

Win Hardy, 89, appeared on GMB to speak to presenters Ben Shepherd and Kate Garraway today, as the show launched a new 1 Million Minutes campaign to help lonely people in the UK.

She was chosen to appear after the charity Contact the Elderly helped her to get out and about again, and now she’s appealing to people around the UK not to forget older neighbours who may be feeling lonely.

Recalling the time she spent recovering from hip surgery earlier this year, Win said: ‘It was nine months of hell. I was stuck indoors for often weeks and I didn’t see a soul.

‘If only neighbours would just give a ring on the phone and say, “I’m going shopping – would you like something?” or is there anything you need?”.

‘Even just a knock on the door and come in and have a cup of tea. Knowing them for so many years and people not doing it really hurt me very much.’

Viewers were moved by Win’s story with one commenting: ‘Where does she live? I work in community care and I’d happily come over and spend time with this lovely lady.’ 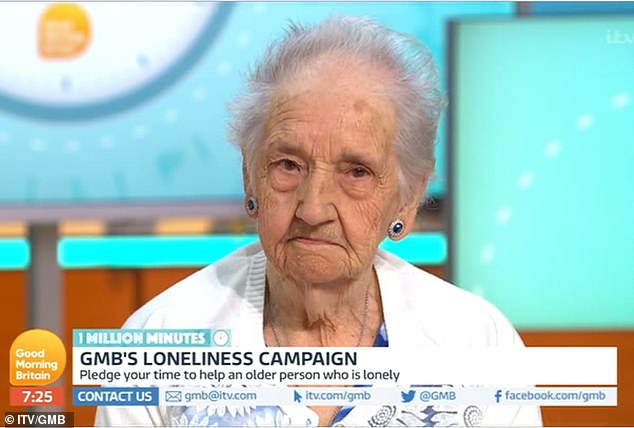 Win hardy, 89, appeared on Good Morning Britain earlier today to speak out about her experience of loneliness

One viewer said: ‘I met one of the funniest loveliest people I’ve ever met in my life last year whilst selling her apartment.

We are the greatest of friends now and she makes me so happy! Her name is Joyce, she is 91 and it’s an absolute pleasure to be with her! I’m off for lunch with her today.’

‘Watching the most lovely of campaigns being discussed on GMB,’ commented another.

‘Loneliness campaign, people volunteer their time to simply check in and chat with elderly people who are lonely. How brilliant is that – just speaking with someone can make such a huge difference in their life.’ 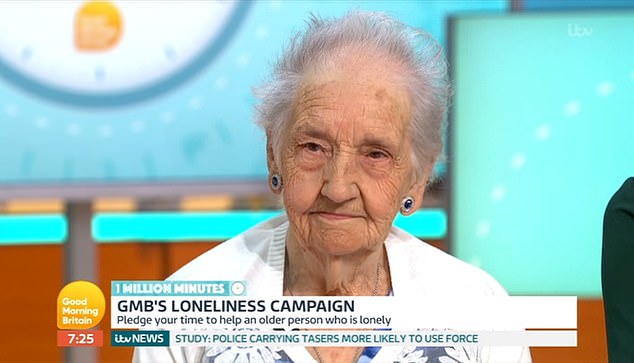 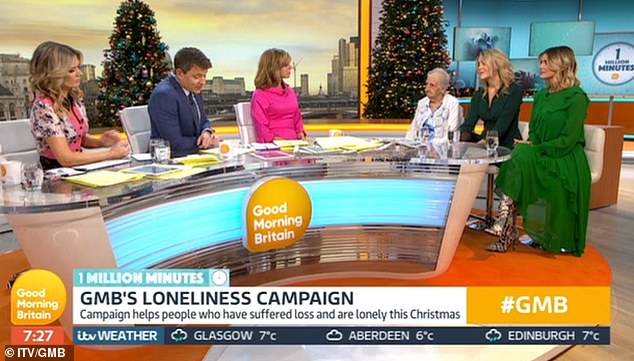 According to age UK, 1.7 million elderly people haven’t spoken to a friend in a month, while a survey conducted by Good Morning Britain found that more than half of Brits felt lonely after losing someone they were close to.

‘This last year has been hell,’ Win explained on the show. ‘I cope. I do my own things. I don’t have any home help at the moment, but Contact the Elderly have been really great.’

She continued, ‘We go out once a month to different places. We’ve been to Kensington palace, to a hotel, a theatre. We meet up with different groups each time. It really is good fun.’ 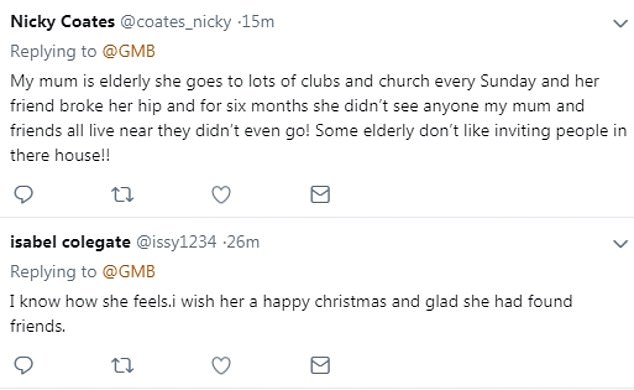 Encouraging viewers to back GMB’s campaign and pledge the gift of time this Christmas, Win pleaded: ‘Please help. I did go singing but the classes had to pack up because there were no sponsors.

‘If people would just sponsor, or even just think of your neighbour. Are they alone? Do they need help? Do they want something from the shops?’

‘It’s all friendliness just to knock on the door. Small gestures or even just ‘hi how are you – just to check you’re OK.’ 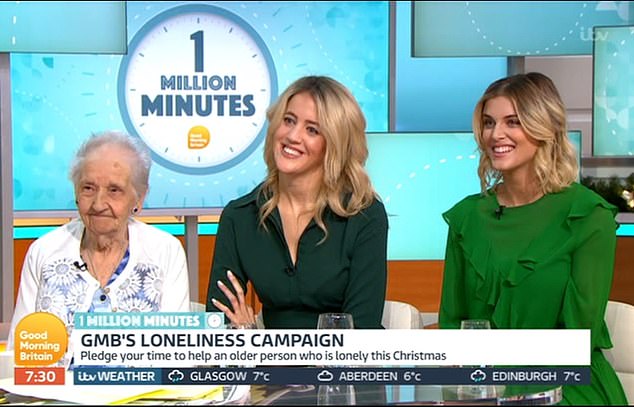 Win was joined by Kylie Taylor, a Contact The Elderly volunteer, on the couch this morning.

‘We as volunteers get just as much out of the group as Win and our friends,’ she said.

‘I’m from New Zealand originally and my family aren’t here. It’s a massive difference in my life. I feel much more connected. Win’s like family.’ 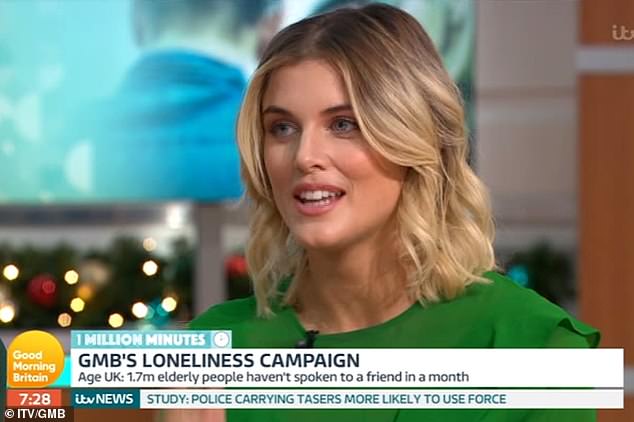 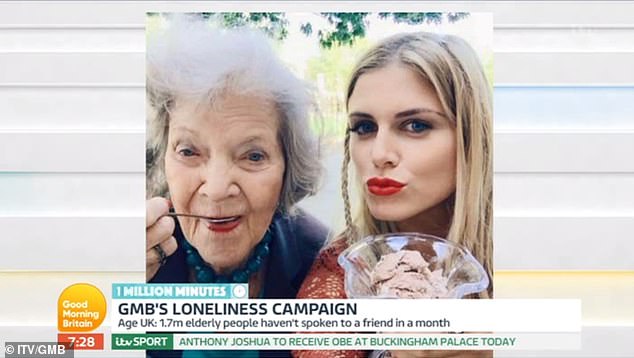 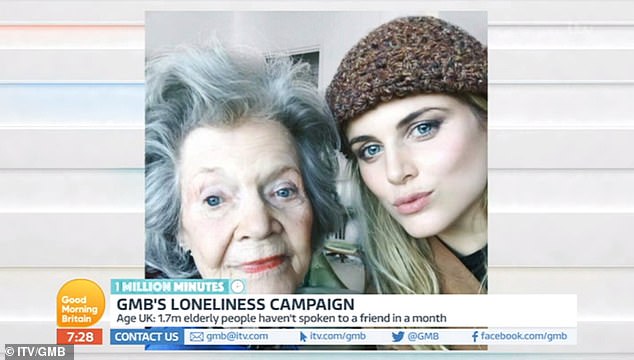 She replied to an advert from an elderly lady on Gumtree who expressed her loneliness – something which Ben said to be ‘a very extraordinary thing for someone to have had to have done.’

‘She become one of my best friends – she was such a hoot,’ explained Ashley. ‘I got to go to her one hundredth birthday party.’

‘She was just this eccentric magazine woman who had lived through all these different parts of life – like she lived through the war, taught etiquette, was a theatre girl.’