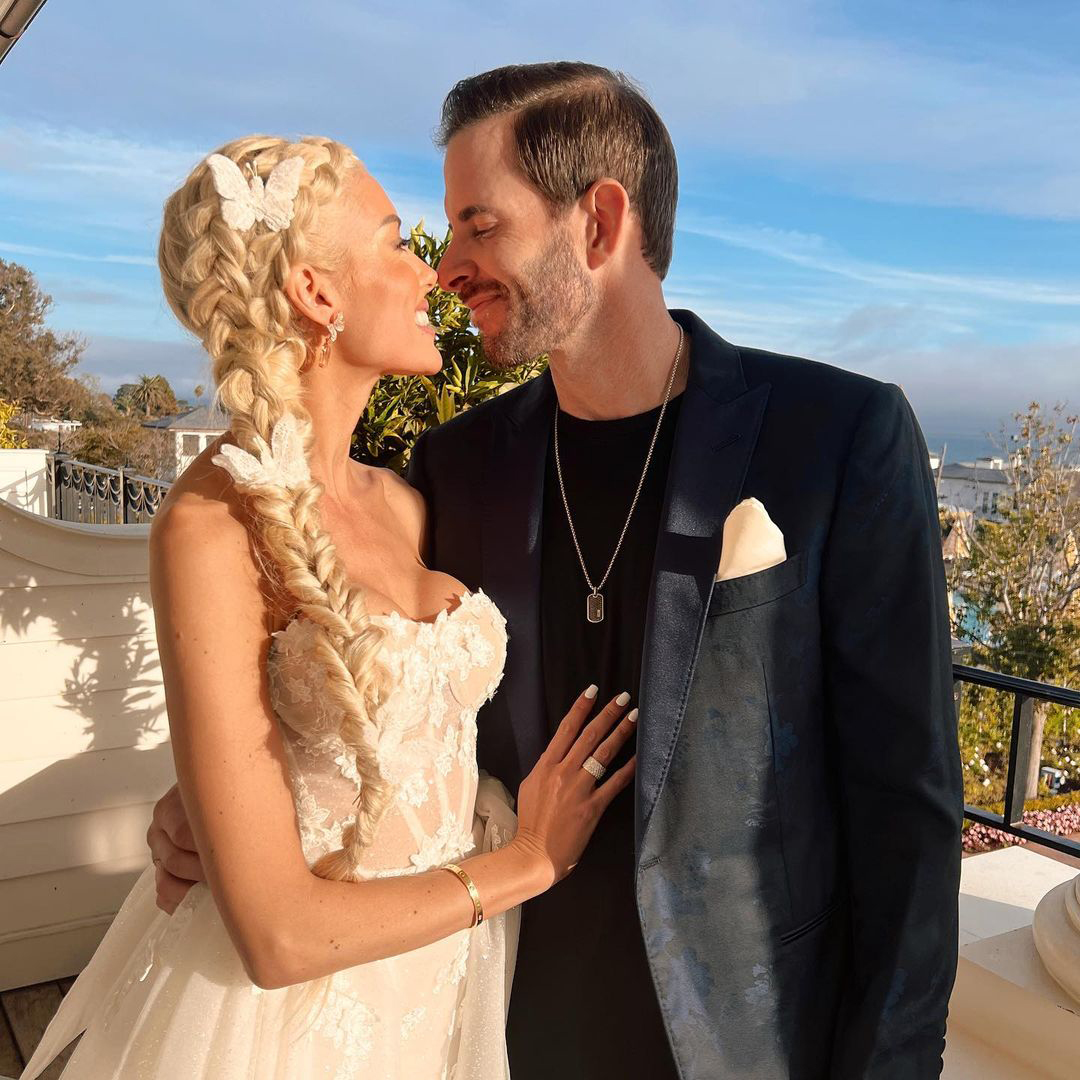 Almost time to say “I do!” Ahead of their weekend nuptials, Tarek El Moussa reflected on marrying Heather Rae Young after previously insisting he wouldn’t tie the knot following his past divorce.

Everything Tarek and Heather Have Said About Their Wedding Plans

While kicking off their wedding weekend on Friday, October 22, the engaged couple celebrated with their loved ones at their rehearsal dinner.

“Ready to say ‘I do’ ❤️ Which is crazy,” the Flip or Flop star, 40, captioned Instagram snaps of the pair on Friday. “If you had asked me four years ago I would’ve told you I was never getting married again and honestly I didn’t even think I would find love.”

He continued, “Then one day Heather jumped onto my boat, looked at me, smiled and the rest is history. Thank god for that day. My life is so much better with you in it… now let’s do this thing!! 👰🏼‍♀️🤵🏻💍❤️.” 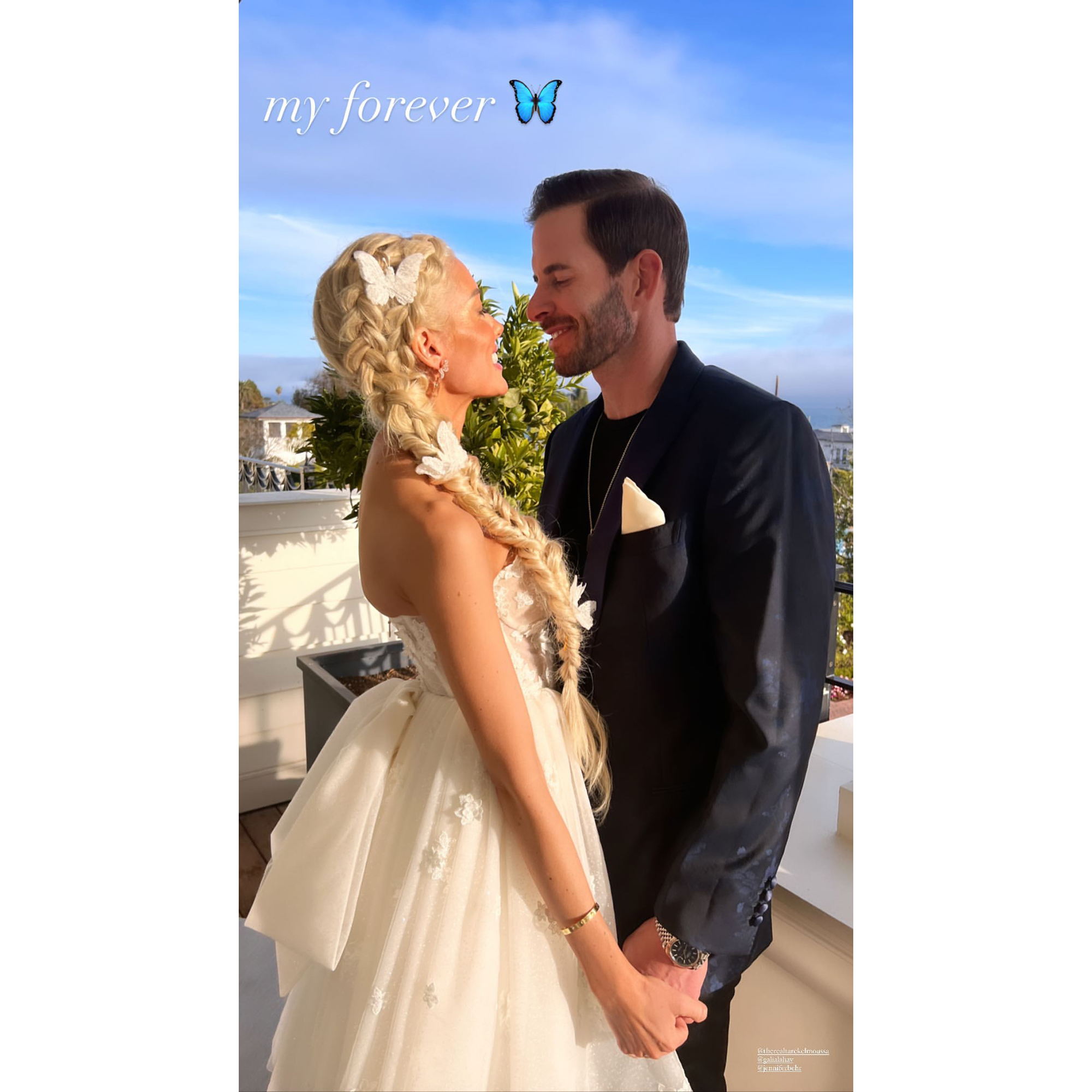 Tarek El Moussa and Heather Rae Young: A Timeline of Their Relationship

In the photos, the HGTV personality wore a black brocade blazer over a coordinating shirt. The former Playboy model, for her part, wore a tulle Galia Lahav strapless dress that had her “feeling like a princess,” she noted via Instagram Story at the time. Completing the look, she added a pair of heels that said “Wifey for Lifey” on the soles and a side braid with white butterfly hairpins.

During the rehearsal dinner with their family and friends, the happy couple enjoyed speeches from both of their fathers, good friends and El Moussa’s 11-year-old daughter, Taylor.

“Heather told my dad that he had chicken legs,” Taylor noted during a brief speech captured via her dad’s Instagram Story on Friday. “He talks about [it] 24/7, even when he’s sitting down making his legs look really big, he goes, ‘Do I still have chicken legs?’ He even admits that until they die he will never forget what she said … about his chicken legs.”

The couple, who are set to wed on Saturday, October 23, shared their excitement that morning while getting ready.

“On our wedding day … Our forever [red heart emoji],” the Netflix star wrote via Instagram Story on Saturday, alongside a quote that read, “Everything you are going through right now is exactly what you need. Everything is serving for your highest purpose. You are in the process of becoming who you are meant to be.”

‘Selling Sunset’ Cast’s Love Lives: Who the Netflix Stars Are Dating Off Screen

The couple met in July 2019 and began dating the following month. The Flipping 101 star proposed one year later on a Catalina Island getaway.

“It was just so perfect because I had the whole weekend planned. Production was there, and she had no idea I was going to ask the question,” El Moussa exclusively told Us Weekly in September 2020 of the sweet proposal. “And even when I got down on a knee and asked her to marry me, I had everybody hiding in tents. So it was all just us out there and it was private, and it was just beautiful.

El Moussa was previously married to Christina Haack from 2009 to 2018 before finalizing their divorce that January. The two share Taylor and son Brayden, 6, and continue to coparent the elementary schoolers.

The Christina on the Coast star, for her part, is engaged to Joshua Hall following her split from ex Ant Anstead, with whom she shares son Hudson, 2.

Satyagraha REVIEW: Glass’s Operas are quite unlike anything else
World News