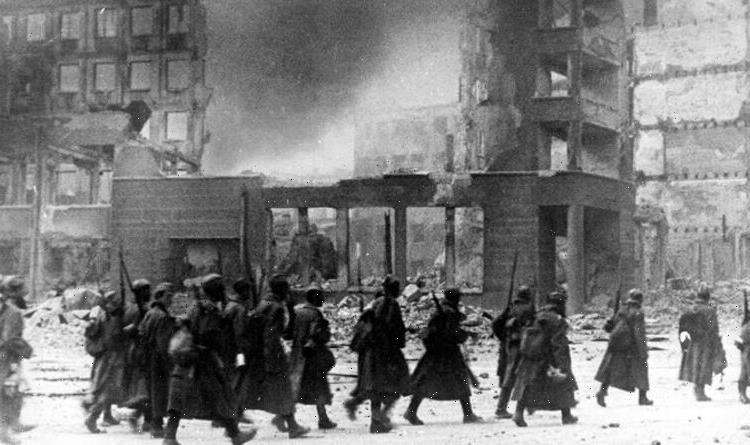 Why Putin may face his own Stalingrad in assault on Kyiv 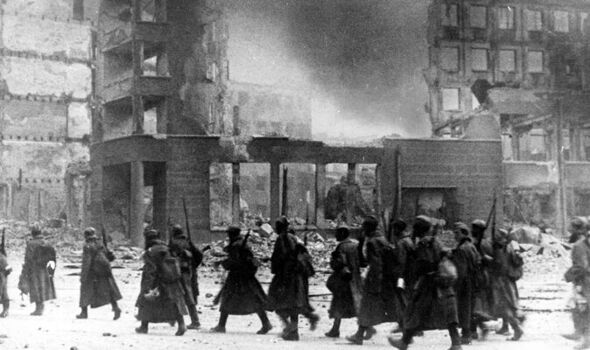 Colossal in its scale, savage in its ferocity, this titanic clash between the Nazi invaders and the Soviet defenders reached astonishing heights of courage and plumbed sickening depths of barbarism. One Russian soldier, Suren Mirzoyan, later recalled his determination in lethal close combat with the German enemy: “I was like a beast. I wanted only one thing – to kill.You know how it looks when you squeeze a tomato and juice comes out. Well, it looked like that when I stabbed them. Blood was everywhere. Every step in Stalingrad meant death. Death was in our pockets. Death was walking with us.”

Stalingrad was probably the most important land battle of the Second World War, paving the way for the Allies’ triumph and the downfall of Hitler’s regime. Its pivotal significance helps to explain its epic cruelty; both sides knew its outcome could change the course of history. In the unceasing violence that lasted for months, around two million combatants and civilians lost their lives and much of the city was reduced to rubble.

Today, almost 80 years since the battle began, an unmistakable echo of Stalingrad can be found in the ordeal of Ukraine’s capital city Kyiv as brutal war engulfs the country.

Once again, the destiny of a conflict in Europe could be decided by the capacity of the homeland’s forces to prevail in intensive urban warfare, and the city’s population to endure almost unimaginable levels of privation.

Illia Ponomarenko, the brave defence correspondent of the English-language Kyiv Independent, recently filed this vivid report from the frontline of the siege: “As I write these lines in Kyiv, my window panes are shaking to the booms of air defence guns intercepting Russian aircraft.”

He went on to describe Kyiv as “a ghost city, a mix of London during the Blitz and something from futuristic post-apocalyptic fiction,” where the streets “are full of roadblocks” and “incoming artillery rounds breaking the silence in the night are not a surprise any more.”

A SIMILAR atmosphere under German barrages at the start of the Battle of Stalingrad was recalled by survivor Boris Serafimovich Kryzhanovsky: “The central district where I lived was the first to be destroyed. It was one of the most horrible days: the earth literally trembled. We took cover in a bomb shelter. The next day our house was gone.”

For the Ukrainian resistance, the lesson of Stalingrad is an inspiration, showing even the most powerful war machine can be defeated.

That view was explicitly set out last weekend by Ukraine’s youngest MP Sviatoslav Yurash, who declared of Kyiv, “It is a massive town of millions and if the Russians try to come in they will have a massive fight on their hands. This will be their Stalingrad if they want to make it so. Nobody is going to surrender.”

If the experience of Stalingrad is indeed repeated, then Kyiv will be the graveyard of Vladimir Putin’s forces and perhaps his presidency, too.

It would be wrong, however, to stretch the analogy too far, since there are crucial differences between the two battles.

For a start, Stalingrad was just one element in a vast global cataclysm that embraced much of the world from North Africa to North America, whereas the present war in Ukraine has been contained so far.

Nor is there much resemblance between Ukraine and the Soviet Union.The former is a democracy headed by a charismatic elected President Volodymyr Zelensky, whereas Joseph Stalin was the merciless dictator of a totalitarian police state.

There is also the bitter irony that the Russians were the heroic defenders in 1942-43 against the Germans, but are now aping the Nazis in their aggression.

And despite increasing levels of bombardment by the invader, the battle for Kyiv has not yet descended to the wholesale slaughter or vicious street fighting of Stalingrad. Even so, the parallels cannot be denied.

Just as Kyiv embodies Ukrainian nationhood, so Stalingrad was of vital strategic and political importance in the Soviet Union. Previously called Tsaritsyn and renamed in 1925 in honour of the country’s ruler, the city was not only a major transport hub on the river Volga but also a key manufacturer of metals and armaments. In their faltering campaign, now entering its third week, the Russians have been exposed for their complacency. Putin’s forces thought they would overrun Ukraine in a few days and bring down Zelensky’s Government but that optimism was a delusion.

The same wishful thinking infused Hitler’s armies when they mounted Operation Barbarossa, the invasion of Russia, in June 1941, believing Stalin’s regime would collapse in a few weeks. Even at the beginning of Stalingrad, the Nazis were over-confident.

“We are being sent northward along the front towards Stalingrad. We can already see the smoking town. It is a happy thought that the end of the war is getting near,” said German infantrymanWilliam Hoffmann.

Part of the Germans’ problem in 1942-43 was that their supply lines were badly overstretched, because the nearest functioning railhead was 50 miles aways and they lacked sufficient trucks.

Led by General Friedrich Paulus, their army needed prodigious amounts of materiel and rations. In September alone, its attack on Stalingrad consumed 25 million rounds of small arms ammunition, 500,000 anti-tank shells, and 732,000 artillery shells, while each division needed 20 tons of food and 50 tons of fodder for its horses. If that sounds familiar, it should. Today, Putin’s forces are also plagued by logistical difficulties, with poorly-maintained vehicles breaking down and tanks held up by fuel shortages.

Moreover, the muddy terrain around Kyiv, full of peat bogs and tributaries that flow into the mighty river Dnieper, is unsuitable for the large movement of troops. Russian columns forced to stick to major roads make good targets for Ukraine’s lethal Turkishmade Bayraktar TB2 drones.

Like the Nazis in 1942, the Russians have been surprised by the strength of resistance to their invasion. Hitler was lulled into a false sense of security about the Soviet Union’s military inadequacy by the Russo- Finnish war in the winter of 1939-40, when the Red Army performed miserably against Finland’s guerrilla warfare.

But on their own territory in Stalingrad, the Soviets fought to the last man, woman and child, galvanised by Stalin’s directive No.227 which warned his people that there must be “not one step backwards”.

The same defiant spirit can be found in Kyiv today, reflected in the checkpoints, roadblocks, sandbags and “hedgehog” antitank obstacles, many created by the city’s artisan metalworkers using old rail tracks, that predominate on the streets.

Ponomarenko, who points out that 100,000 of his fellow citizens have joined the Territorial Defence Force, the Ukrainian home guard-style organisation. Women were in the front line of the Stalingrad defences, especially the anti-aircraft and anti-tank batteries, 75,000 of them having undergone military training, and the same is true in Kyiv today, with women taking up arms and manufacturing petrol bombs.

JUST as Russia is battling for air superiority today over Ukraine, so the Germans held the skies over Stalingrad in 1942 through a Luftwaffe force of more than 1,100 aircraft.

But air power did not translate into victory because the decisive fighting was on the streets. Contesting every building, operating in small units of between five and ten soldiers from well-protected strongpoints, and bolstered by reinforcements from across the river Volga, the Russians put up a fierce defence.

One brilliant sniper, Vasily Zaytsev, was responsible for no fewer than 225 kills.

The Russians’ heroism was encapsulated in the extraordinary rearguard action led by Yakov Pavlov, whose platoon captured a four-storey building from the German army and held it for the next two months. Pavlov and his men installed machine guns at every window, placed an anti-tank gun on the roof, surrounded the property with barbed wire and landmines, and smashed holes in the walls to create interior walkways.

Amid such bravery, the horrors endured by Stalingrad’s civilians were appalling, as shells rained down and food ran out. Valentina Savelyeva, who was five years old at the time of the battle, remembered having to eat clay from the banks of theVolga to survive.

Such a drastic measure did not help her brother, who died of hunger and cold.

Many families lived in improvised bunkers, but these could be dangerous, as Valentina’s own neighbours discovered when they were asphyxiated by a deadly air strike.

“I’ll never forget the moment when the bodies were dug out,” she recalled.

“There was a girl a little older than me. She had clumps of hair in her hands that she had torn out in desperation as she choked to death.”

Nazi ruthlessness was not enough to overwhelm the defenders.

Even when the Germans occupied the majority of Stalingrad, they were never secure in the face of the Soviet Union’s guerrilla tactics, which they dubbed “Rattenkrieg” – or “rat warfare”.

A major Soviet counter-offensive in late November led to the encirclement of Paulus’s troops, who now found themselves under siege.

They fought on but, as their supplies ran out, the end was inevitable.

Alexander Werth, a war correspondent embedded with the advancing Soviets, described the scene in one burnt-out German stronghold that fell. Skeletons of horses littered the ground, while in a yard a German soldier squatted over a filthy cesspool, his face “a mixture of suffering and idiot-like incomprehension”.

Against a nearby wall were piled “the yellow corpses of skinny Germans” and in the basement were 200 more soldiers “dying of frostbite and hunger”.

By the time of the Nazis’ surrender in February 1943, their total casualties – killed, wounded or captured – at Stalingrad, along with those of their Allies, were estimated to be perhaps as high as 870,000.

But the Soviets also paid a monstrous price for their heroic triumph, with a total of 1.12 million casualties. Given such past bloodshed, it would be an inhuman tragedy if today’s Russian aggressors were to turn Kyiv into another Stalingrad.

Colton Underwood: 'Coming Out Colton' Season 2 Would Not Be 'Healthy Decision'