Home » Lifestyle » Why public ‘bromances’ are good for men to see

Why public ‘bromances’ are good for men to see

Forget aces down the line. After winning his seventh Wimbledon championship, 21-time grand slam champion Novak Djokovic was met by screams and claps of adulation for a move not often seen on the court: declaring that he was officially in a “bromance” with his competitor, Nick Kyrgios.

“Hopefully this is the start of a wonderful relationship between the two of us, off the court as well,” said Djokovic, holding his trophy in an interview following the three-hour match, as fans in the stands, including Prince Harry, beamed and clapped. 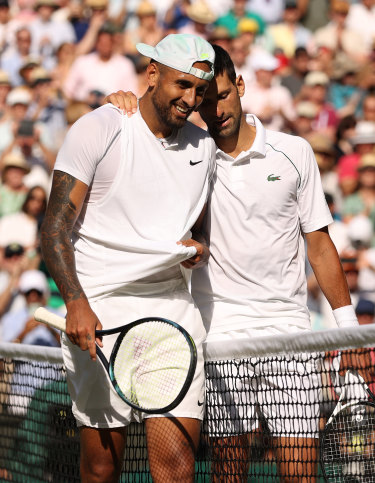 It’s the latest example of high-profile men publicly declaring their affection and friendship for other men.

It follows actors Chris Hemsworth and co-star Taika Waititi speaking about the “love story” of their friendship, last month, which began when they hung out together, with their children. And, yesterday, Essendon Football Club player Sam Draper was celebrated after he kissed teammate Matt Guelfi on the pitch at the Gabba, after their team beat Brisbane in an unexpected upset on the weekend. (“So good,” wrote one man on Twitter, followed by a smiling emoji.)

For mental health professionals, these displays send an important message about the importance of close male friendships.

“It normalises that they’re [men are] allowed to have emotions, and talking about them can actually be beneficial, it’s not a whinge,” says Melbourne-based clinical psychologist Danielle Graber. “Guys are just not very good at identifying and talking about emotions. They’re not taught. And it’s not encouraged.”

And it can lead to mental health struggles, says Bruce Smyth, a professor of family studies at the Australian National University.

“We know about male suicide rates, we know about a whole lot of bad outcomes that happen when people are isolated, and don’t have someone to talk to,” he says, adding that men are particularly at risk of being isolated after the breakdown of a relationship or divorce because they often invest all their support in their romantic partner.

“It’s kind of like, where do they go to, where do they turn?” says Smyth. “We’re raised to be strong and independent and not to show any weakness, and therefore we’re less likely to develop these deep, richer extended networks of friendships, and women are.”

Richard Fletcher, who leads the Fathers and Families Research Program at The University of Newcastle, has seen first-hand the difference it makes when men do receive emotional support from other men. 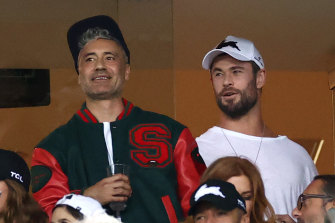 Taika Waititi and Chris Hemsworth at an NRL game in 2021.Credit:Getty Images

He recalls how one man responded after receiving a text message of support from the university’s program, SMS4dads, which sends messages to fathers that connect them with other fathers and provide information about their health and their baby’s health.

“I know it’s probably being a little dramatic, but it felt like somebody walked into my office, put their hand on my shoulder and said, ‘Are you OK?’” the man wrote. “And that’s golden because guys struggle with all that kind of stuff.”

For Smyth, the latest public celebrity “bromances” are an indication that the long-standing cultural barriers that have traditionally kept men from having intimate communication with other men in friendship are breaking down.

“It’s becoming increasingly OK to have a bromance,” he says.

But male friendship advocate Brett Churnin hopes this is just a step towards greater cultural change.

“I would love for this to be really mainstream, so for me to have a conversation with another man about his mental health is no different to having a conversation about his physical health, like talking about a torn meniscus,” says Sydney-based Churnin, who has helped set up hundreds of men’s support groups around the world. “There’s something extraordinary when you feel totally seen and heard and witnessed by other people; we realise that we’re not alone,” he says. And a group of men can provide an invaluable type of support that a man might not get from his partner.

“They’re not trying to solve my issue, there’s a bit more distance,” says Churnin, who recalls receiving support in a men’s group when he was feeling “intense” anger over a frustrating encounter with a relative.

“They’re not so attached to any kind of outcome,” he says of the men he spoke to. “A lot of the time, for men, people are looking for us to be the rock. And it’s kind of like, ’Well, it’s OK to be the rock, but if internally I’m not, then where do I kind of go? My men’s circle is where I go.”