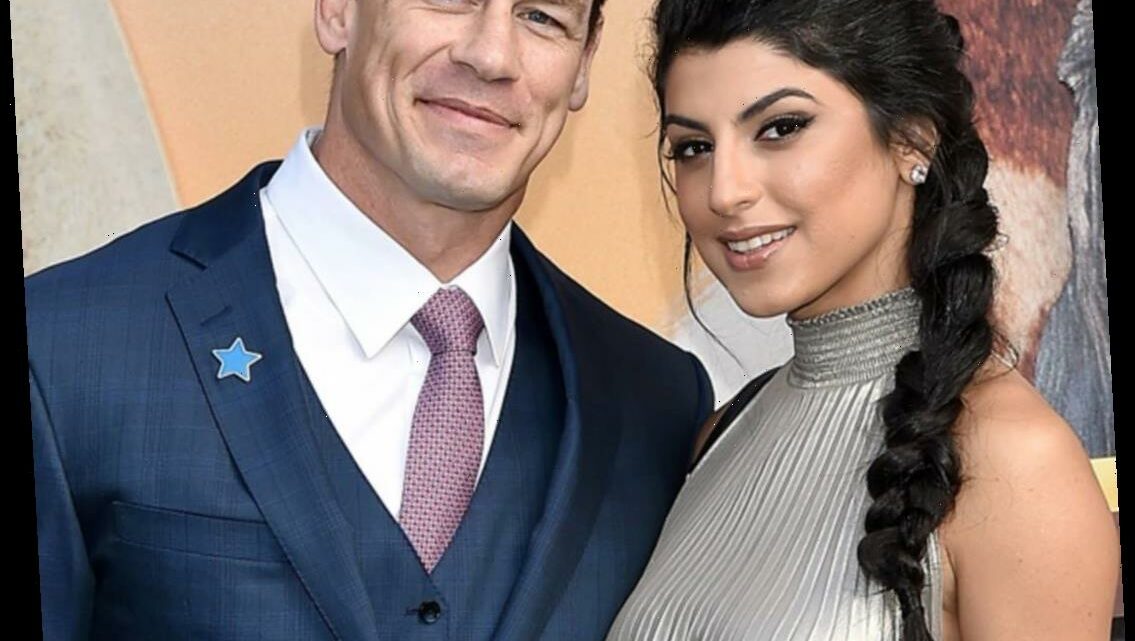 Why John Cena Was Ready to Marry Shay Shariatzadeh

The WWE star turned ubiquitous entertainer up and married his girlfriend of 18 months after being on the record saying, "I don't want marriage." But that was before John Cena met Shay Shariatzadeh.

In the ring as a WWE star, the "attitude adjustment" became John Cena's signature move.

He has since mastered the concept in real life, too.

But while you can watch countless YouTube clips of Cena hoisting humongous men over his shoulders and throwing them onto the nearest available surface, alas there is no video library that shows the work and training that went into the adjustment we're talking about.

Because, four years after flatly saying, "I don't want marriage," the once-divorced entertainer has taken the plunge with his girlfriend of roughly a year and a half, Shay Shariatzadeh, the couple tying the knot in Tampa, Fla., on Oct. 12 in a surprise (to most people) courthouse ceremony.

What looked like an engagement ring was spotted on Shariatzadeh's finger in February, but they never publicly shared any plans to wed.

Cena did reveal last October how their coupling began, about seven months after they were first photographed together in her native Canada, where he was making the comedy Playing With Fire—and they walked their first red carpet as a couple at the premiere.

"It's a wonderful day for a movie premiere and I got a beautiful date," he told Entertainment Tonight. "What's truly special about this one is that, no matter what projects I'm involved in the future, this one will always have a special meaning because I got to film a special project and meet someone special."

Though certainly photo-ready, Shariatzadeh is not in show business—which perhaps was a major selling point for Cena, so much of whose last relationship played out on Total Bellas, whether he was onscreen or not.

Rather, she's a product manager in the video security industry (always good to have one of those in an entertainment family) at Avigilon, a tech solutions company in Vancouver. She studied engineering in school and last year was spotlighted by Avigilon on International Women's Day, saying in a work profile that she looks up to her surgeon mom and her motto is "practice makes progress."

Those certainly sound like words Cena lives by, too.

"Perseverance is the quality that I have," he said on Sunday Sitdown With Willie Geist a year ago. "I've never really been outstanding at anything except sticking with something."

While not just anyone becomes a WWE star, then a movie star and an in-demand host without talent and all that je ne sais quoi, determination, dedication and hard work certainly did factor into Cena's success.

And though he may have been talking about his career in that moment, he certainly has tried to stick with certain things that in the long run just weren't meant to be.

Cena, 43, spent nearly six years with WWE champion Nikki Bella, starting out as friends on the wrestling circuit before finally asking her to dinner in 2012.

They were, as far as they said, very much in love, and Cena did ultimately propose—in 2017 at WrestleMania 33, right after they'd toppled The Miz and Maryse—even though he had said out loud that he didn't want to get married.

For starters, he had tried it once, with longtime sweetheart Elizabeth Huberdeau, but they divorced in 2012, three years after tying the knot.

"A lot of that was because of my inability to be a good husband," he candidly told Rolling Stone in 2016, "but then Nicole strolled into my life, and that did it."

By "it," he meant that falling for Bella got the muscle car-collecting, always-on-the-go, PBR-drinking dude who in 1999 drove cross-country to Hollywood with a dream and $500 to his name to willingly share his life with someone.

For the most part.

As seen on E!'s Total Bellas, he made Bella sign a 75-page agreement before she moved into his Tampa mansion in 2013—as a guest.

"Although I do not wish to be formal, I do not want there to be any misunderstanding regarding your presence at the home as my guest," the document read. "In the event that I ask you to vacate the home, you agree to immediately vacate the home and remove any and all items you have brought into the home as soon as possible."

Cena explained that he was only trying to protect his assets for the sake of his family, several members of which he provided financial support to. "This is what my life is," he told his about-to-be-live-in girlfriend. "This is what it's become. You met my family. You think my mom paid for that house herself? She didn't. My brother lives in that house, they're expecting a child. My younger brother, he's got medical problems. I make sure he's okay.

"I always tell them, I'm a horrible brother, but I try to be the best provider that I can. I just don't want to ever be in a position where that's in jeopardy."

Ultimately Bella filed his benevolence away in the "plus" column, as would many, but several years later, she still sometimes felt like a guest, despite the fabulous only-hers closet she called her favorite room in the house.

Cena was consistently unapologetic about wanting things the way he wanted them.

Talking about the things he and Bella fought about most—marriage; having kids; taking care of their dog, Winston; and his workaholism—he told Rolling Stone, "Look, I know I cannot handle raising a child. It's like with the dog. My biggest thing to Nicole about the dog was: Love dogs, but I can't contribute to taking care of one. I don't have the time. And just because everyone else is happy with children doesn't mean that's how I have to live."

He continued, "I've been upfront about this. I just have things I need to get done. It's not negotiable. We've been to therapy over it. I don't think it will ever be over with. I'm stubborn as f–k and extremely selfish as well. I don't want kids, I don't want marriage. That's me just saying, 'Hey, this is my life and this is how I'm going to live.'"

So call Bella precariously happy when he proposed a year later.

"Such a wonderful, meaningful, emotional day yesterday with the woman of my dreams and both of our families," Cena tweeted the day after their engagement party in January 2018. "I love you Nicole, you've made me realize the importance of togetherness."

But going by his past comments, it wasn't surprising that they both walked away a year after he popped the question, Bella calling off the destination wedding they (but mainly she) had been planning. They did spend a couple of months trying to work out their issues, but they soon realized it really was over.

The ensuing months were admittedly not easy, particularly with everything playing out in the public sphere. However, in one of those sweet twists of fate, Bella rang in 2019 in the arms of Dancing With the Stars pro Artem Chigvintsev, her partner when she competed on the show in 2017—and now her fiancé and father of her 2-month-old son, Matteo.

Yet though she was happily ensconced with Chigvintsev by March 2019, that didn't mean she was excited at the prospect of seeing Cena with someone else.

"My stomach went into knots," she admitted on The Bellas Podcast, recalling how friends (thanks, ladies) started to send her links to the pictures of her ex and his new flame, who was still going by "mystery woman" at the time.

But to her surprise, she was okay. "You know when you get a text or you see a photo or you see your significant other flirt with someone or something, you know how you get those knots in your stomach that hurts?" Bella described what she expected to feel. "You either want to poop your pants immediately…or you just have the craziest tummy ache, right? So neither of that happened to me when I saw the photos."

Bella explained that she still sometimes felt bad about certain things she said, or how Cena may have come off on Total Bellas, and ultimately she was happy that he looked so happy.

But if his quick jaunt to the courthouse may seem sudden after once being so adamant about not wanting to get married and then almost suffering frostbite from those cold feet, there's little chance that getting married was a spur-of-the-moment decision for him.

And now all bets are off regarding kids, Cena perhaps being in a different place now than he was two—let alone four—years ago. For starters, he's now a children's book author, and this fall he's been busy promoting Elbow Grease: Fast Friends, the third book in his series about a determined monster truck who may be smaller than his four brothers but who, through various ripped-from-real-life means, always finds a way to power through his doubts and fears.

Since wrestling has so many young fans, he has said, it actually felt like a natural next step for him so he can keep being a positive influence on kids once his days in the ring are behind him entirely. And he, too, has a bunch of brothers—though he's hardly the smallest.

"I think the only difference between myself and Elbow Grease is size," he told Willie Geist last year, "because of my five brothers I am the largest." But he and Elbow Grease are all about gumption. "That was just one thing, at an early age, I just chose to go with something and stick with it," he said.

Moreover, the series' mechanic, Mel, is a woman who's terrifically gifted at what she does. "And she has a larger role to play in each and every installment of the series."

That interview aired not long before he and Shariatzadeh attended the Playing With Fire premiere.

Asked if at the very least he had a cheat food despite being on the record saying he never changes the way he lives, Cena said on Good Morning America last month, "You know what, I should retract that statement, 'cause I believe we should always be evolving, so I'm constantly changing. But I try to develop a consistency, because long-term health and long-term wellness, consistency is a root of that."

Also, he loves cookies. And less than two weeks later, he had evolved into a married man.