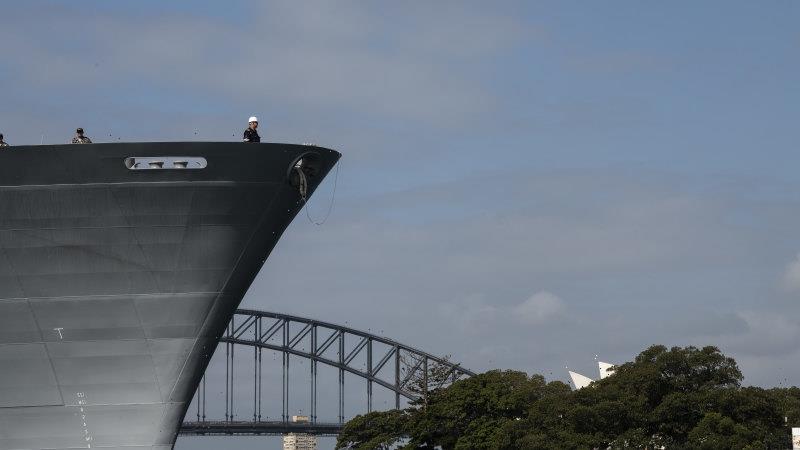 My husband used to be in the navy and one of his tales from those days is the time he was ordered to shoot a shark.

He was an 18-year-old quartermaster gunner banished from his Hawaii-bound warship to the floating equivalent of juvie hall. And his new vessel’s first duty was to hover over the tiniest yachts in that year’s Sydney to Hobart because they kept upending in heavy seas. 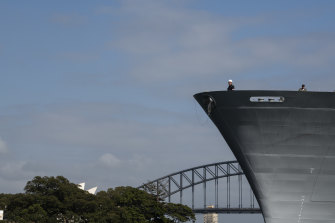 All at sea. A stint in the navy taught Kate Halfpenny’s husband that he was no shark shooter.Credit:Louise Kennerley

The mother ship idled as a rubber duckie burned off to pick up some men overboard. Chris was on deck as duty marksman when a hammerhead was spotted having a great old time basking 150m away. A sub-lieutenant came in hot: “Able Seaman Ogge, shark on the port bow! Shoot it.”

Quick portrait of my husband. While officially then a trained killer in the Australian armed forces, under his bellbottoms he was – is – a man in thrall to those YouTube clips where families and lost pets reunite and counts the night he swam stoned with seals at a zoo as a life highlight. He teared up this week when the vet said our 12-year-old Groodle has old eyes. 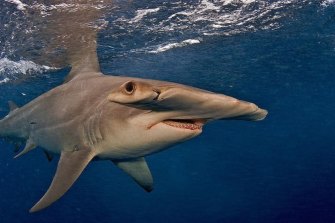 Possibly the hammerhead that got away …Credit:Mags King

He’s no shark shooter. Which is why his response to Mr Clear and Present Danger wasn’t “aye aye sir” but, “really?”

Chris aimed half-heartedly with his semi-automatic, missed by heaps and the startled hammerhead took off. Rescued yachties aboard, so did the ship, It was the only time my husband fired his weapon on duty in defence of our nation and shortly after he jumped ship and there ended his naval career.

There is a legacy of that strange little incident on the high seas. At our place, ‘shoot the shark’ is the go-to phrase when we don’t want to do something but feel compelled to, whether by good manners, weak character or strange obligation. Right now, I’m toying with Hobbytexing “Shoot the Shark” on a t-shirt, so filled with ennui am I.

This year has been my year of saying yes, and it has been fantastic. Work experience with Maria the local dog groomer, dinner with strangers. But suddenly, I’m winding back the yesness out of self-preservation.

It’s not that I have a ton of offers and can’t fit in drinks or a Saturday city party. It’s not that I’m disorganised. A dozen confit duck breasts and multiple hams sit in my parents’ garage fridge, the $40 kooky unmanicured tree from a local farm is decked, guest beds are all made.

It’s more that I can’t be arsed. For no good reason, my capacity to choreograph a dazzling show of glitz and sentiment and practicalities is drained. So I’m saving my energy for the necessities (kids, Kir royales, a great playlist, tins of Quality Street, two types of semi freddo) and it’s a big fat guilt-free no to pleasing everyone, to tricky finger food, to sending Christmas cards, to bread sauce, to Curtis Stone, to Love Actually bah humbuggers, to social media show offs. No to anything that will not make me happier.

All I really want for Christmas is less responsibility. And those Marni sandals I ordered on behalf of my husband.

Anyone else overwhelmed and resentful and really tired? It’s not a groundbreaking question, what with our universally draining year, but as December 25 nears it feels like we’re all pinned in Uncle Fester’s screw press. Put there by our inability to say what we really need. Which might be no.

I need someone to explain the tyranny of the Christmas Day deadline. We rush about, painting the house, getting our roots done, teaching the cat to read. Heads up: the world will keep turning even if you decide not to recarpet the bungalow.

What I will say yes to is raising a glass to the hammerhead and my husband. The shark who survived. The sailor who went on to always stick to his guns rather than fire them. People, remember that duo and their marine ballet. Don’t do what you’re not feeling.

Urban Meyer's daughter vows 'war' after Jaguars fire coach: 'I think you just released the kraken in me'