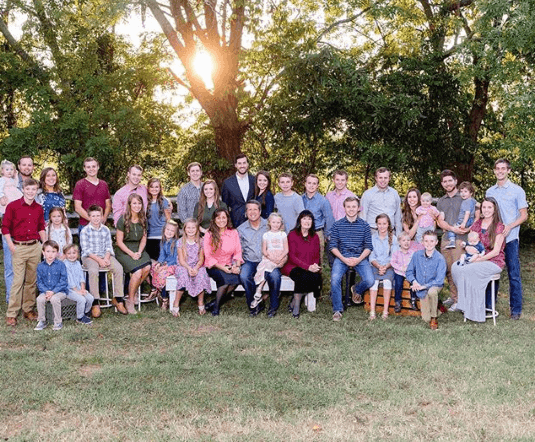 The Duggar family, which gained popularity from the TLC shows 19 Kids and Counting and Counting On, has 19 children that all have one interesting thing in common: The first letter of their first names. Some of the names have even changed traditional spellings to fit with the Duggars’ “J” pattern (such as Jinger, which is normally spelled with a G). But why have the Duggars named every single child something with the same first letter? Michelle and Jim Bob Duggar with children, children-in-law, and grandchildren | The Duggar Family via Instagram

The couple wasn’t set on the idea of naming their children similar names when they first got married. According to Bustle, in 2012, Michelle opened up in a blog post about where the tradition started. When their first son was born, she said they loved the name Joshua, which was from the Bible. And they believed that if they were to have another son, they would name him Caleb. (In the Bible, Joshua and Caleb were good friends.) When Michelle found out she was pregnant, she was excited about the baby name. However, she miscarried.

Michelle then found out she was pregnant with twins, and she decided to name her son John (from the Bible), and her daughter Jana, since her grandmother’s name was Ana and she liked the idea of having three children with J names.

Before Michelle miscarried, she was actually on birth control pills and was never planning on having so many children. However, once the miscarriage happened, she and Jim Bob realized that God must want them to open their hearts to however many children they should have. That’s when Michelle went off birth control and began getting pregnant whenever God felt it was time. Incidentally, that’s also how the J names kept going.

Once the couple had three ‘J’ children, they felt they couldn’t stop

Michelle said after her third child, she was worried that if she only had one more, she didn’t want the child to feel left out for not having a name that stared with J. However, what she thought might be only one more ended up turning into, well, 16 more. The Duggars never questioned the amount of children God gave them, and they’re happy to have as many as they do. (However, the couple’s 19th child, Josie, did have trouble at birth, and they have not welcomed any children after her.) Michelle managed to come up with a name for every one of them, but it did require her to get a bit creative at times. (Names such as Jana, Jinger, and Jessa aren’t too common these days.)

Today, they have 19 children with same-letter names

Although it started out merely by accident, the name game continued all the way down to the Duggars’ youngest child, Josie. The Duggars have about a dozen grandchildren today, but their children haven’t stuck with the tradition of naming each of them with a J — or any common letter for that matter. But what started out as a happy accident has become one of the most defining aspects of this television-famed family.

‘Dancing with the Stars’ Not Returning Spring 2019 After Controversial Season