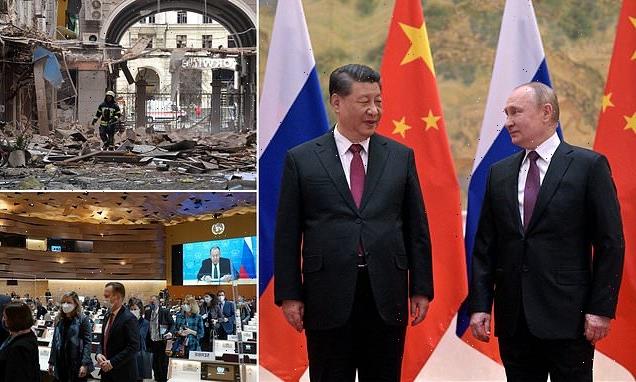 Why China might be world's best hope to halt war, writes EDWARD LUCAS

Why China might be the world’s best hope to halt this savagery: In an extraordinary geopolitical shift, Beijing appears so appalled by Vladimir Putin’s Ukraine onslaught that it seems to be trying to stop it, writes EDWARD LUCAS

But the leadership in Beijing appears so appalled by Vladimir Putin’s reckless onslaught on Ukraine that it now seems to be trying to stop it.

In an extraordinary geopolitical shift, we are seeing China emerge as the possible arbiter of European security.

On Friday, China surprisingly abstained at the United Nations Security Council in a vote condemning Russia.

Yesterday it repeated that action, while separately China’s foreign minister Wang Yi offered his country’s services in brokering a ceasefire.

China was ‘extremely concerned about the harm to civilians’, he said. Few could have foreseen this.

As Chinese relations with the West have chilled in recent years, the Russian regime has knitted a web of military, economic and financial ties with the communist dictatorship in Beijing. 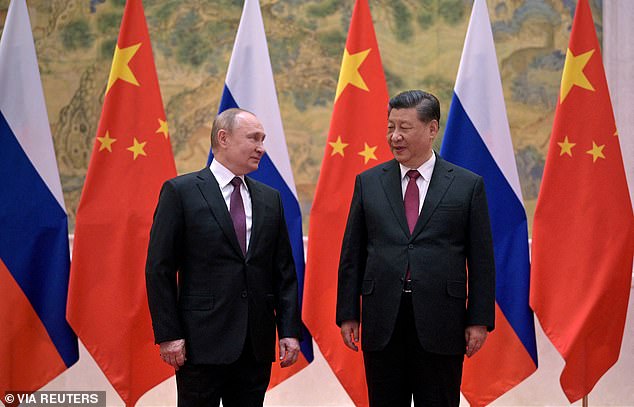 And in the days before Putin’s invasion, China accused the U.S. of being the ‘culprit’, blaming it for ‘heightening tensions, creating panic and even hyping up the possibility of warfare’.

The foreign ministry in Beijing refused to say that the invasion was a violation of Ukraine’s sovereignty. China has also criticised Western sanctions on Russia.

But, swiftly and shockingly, its policy has changed. For behind the scenes, Chinese leader Xi Jinping is reportedly furious with the Russian president.

The Beijing strongman might have accepted a blitzkrieg victory, but not the costs and risks of a protracted war that seems ever more likely.

And why? Put bluntly: China prizes stability — and Putin threatens that. Nothing matters more for China’s nominally communist leaders than continued growth of their giant capitalist economy.

Only through the continued raising of living standards for its 1.4 billion people can the social and regional tensions that plague this vast nation — and threaten the regime’s stranglehold on power — be eased.

Prosperity also underpins Xi’s plan to make China the most powerful country in the world by the middle of the century.

A long war in Ukraine would jeopardise that. It would introduce new risks to the international financial system, cast a chill on global trade, and already means soaring prices for energy, food and fertiliser — all vital resources that China largely imports.

Putin has also breached taboos sacred to China. The Beijing regime detests any notion of outside interference in a nation’s domestic affairs.

It is neurotic about what it calls ‘separatism’ because it knows that its own claims to territories such as Tibet and the self-governing island democracy of Taiwan, for example, are shaky.

Fixated on territorial integrity, China looked frostily on Russia’s first attack on Ukraine in 2014. It has never recognised the Kremlin’s annexation of the Crimean peninsula.

Nor has it acknowledged the Russian-backed breakaway territories in eastern Ukraine of Donetsk and Luhansk.

Another reason for ire with Putin is that China’s rise depends on Western weakness. So long as we in the democratic world are divided and distracted, Beijing can repress its own people while quietly building its influence abroad. 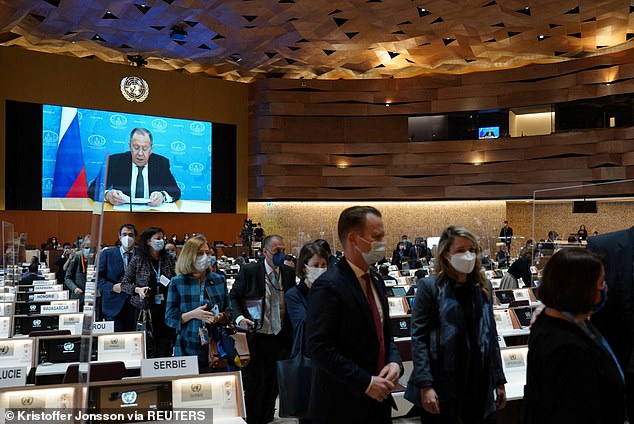 Denmark’s Foreign Minister Jeppe Kofod walks out along with other ambassadors and diplomats while Russian Foreign Minister Sergei Lavrov’s (on screen) pre-recorded video message is played at the 49th session of the UN Human Rights Council at the European headquarters of the United Nations in Geneva, Switzerland, on Tuesday

But Putin’s invasion of Ukraine has woken us up. Nato is rejuvenated, the European Union united, the frayed transatlantic relationship repaired.

Even laggardly, niggardly Germany last week committed to bolstering defence spending to more than 2 per cent of GDP after years of refusing to meet its Nato commitment.

Shocked and shamed by the bloodbath in Ukraine, Westerners are now realising that freedom does not come free: its costs include financial sacrifices and military risks.This new mood of unity and determination spells big trouble for mainland China.

Having rallied behind Ukraine, Western public opinion and decision-makers could see Taiwan as another similarly beleaguered democracy.

And next time, Westerners will be far less likely to accept any attempts by a big dictatorship to smother a little neighbour.

Tellingly, Taiwan has hurried to hitch a ride on the international bandwagon in support of Ukraine.

President Tsai Ing-wen and two other leaders have each donated a month’s salary to support humanitarian relief there — they recognise what is to be gained.

China’s ruler-for-life Xi sees other dangers, too. And perhaps even perceives Putin’s plight more clearly than the Russian tyrant does.

If Ukraine becomes a Syrian-style quagmire, the humanitarian and security consequences will plague Europe, and the world, for a decade.

Chinese dreams of new global infrastructure links running from East to West would be dashed. 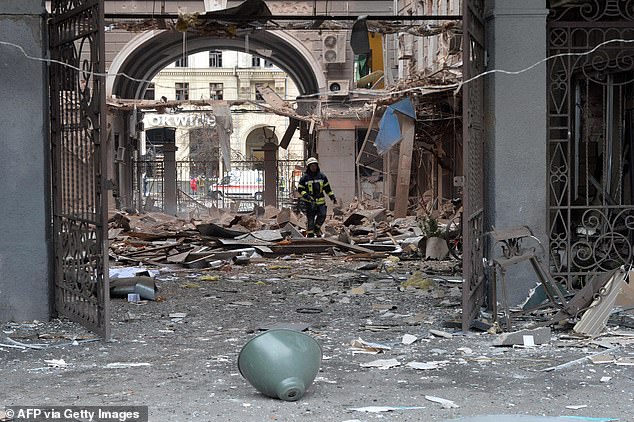 Alternatively, the botched war in Ukraine could lead to Putin’s fall. And what’s to say a new leader won’t find the West a better long-term partner than China.

Worse still for China is if a cornered Putin tries to escape through escalation.

Economic countermeasures such as interrupting Europe’s gas supply would hurt the world economy even further.

But the ultimate nightmare is that Putin goes nuclear — perhaps testing a low-yield weapon in the hope of cowing his critics.

Such a terrifying gambit might indeed deter the West from trying to throttle Russia. But it would be a disastrous shock to global confidence and stability — and end Xi’s dream of China’s peaceful rise.

Indeed, it may be Chinese cyber-sleuths who have the best chance of forestalling such an insanely irresponsible move.

Despite superficially friendly ties, China spies hard on Russia — a country that the intensely cautious nation views as ill-run and reckless.

The Kremlin’s nuclear command structure and communications are a top target for all foreign intelligence agencies.

It is not utterly fanciful to imagine Western and Chinese agencies pooling their efforts to prevent the erratic Russian leader from precipitating a nuclear holocaust. 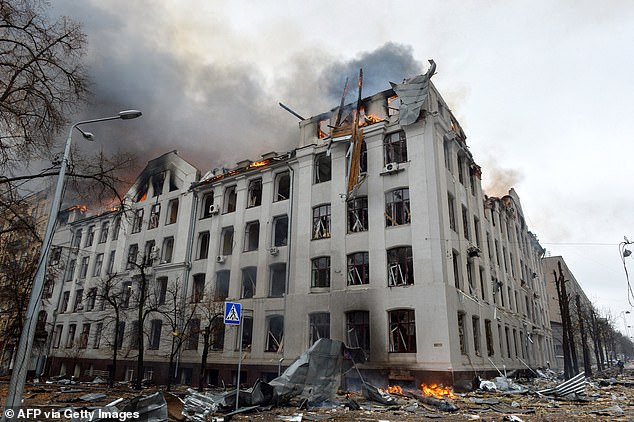 The scene of a fire at the Economy Department building of Karazin Kharkiv National University, allegedly hit during recent shelling on Wednesday 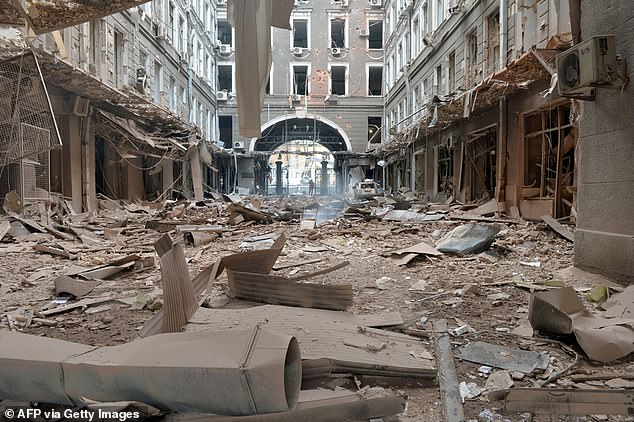 All this explains why China is now so eager to broker a ceasefire. But what would such a deal involve?

Russia’s ragtag forces would rumble home, to be replaced by UN peacekeepers — doubtless including a large contingent from China.

The regions occupied by Russia would come under international administration pending referendums on their future status: to stay in Ukraine or to join Russia.

For its part, Ukraine might have to put its Nato aspirations on hold, while gaining a promise of speedy, unhindered accession to the EU.

Albeit painful, such conditions offer the best long-term prospect of peace and security. And they would be infinitely preferable to the country’s continuing destruction.

The West, spared a colossal humanitarian catastrophe, could devote its efforts to reconstruction — thus ensuring that in the medium-term Ukraine becomes a far more attractive country than Russia for its citizens.

That outcome would be exactly what Putin wants to avoid. But it would be hard for him to stand up to arm-twisting from Beijing.

China is now Russia’s only real lifeline: by far its most important supplier, customer and financial intermediary.

For the crippled Russian economy, even mild sanctions from the East would be devastating.

The greatest winner from all this would be China. Only lately it was heading for international pariahdom for its human rights record and bullying.

Now, a debut at the heights of global diplomacy looms.

And we in the West? Our naivety and greed have already consigned peaceful and friendly Ukraine to Putin’s meat-grinder.

What a bitter irony if we have also brought China’s power to our doorstep.

Who is Van Taylor and why did he end his reelection campaign?