Home » Lifestyle » Who is Bella Ramsey from The Last of Us? 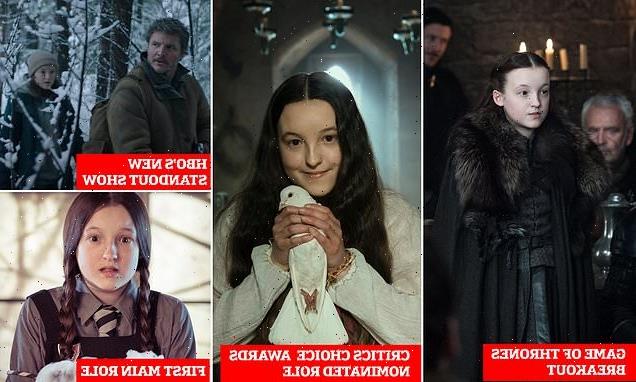 Who is Bella Ramsey from The Last of Us?

From CBBC to LA! Bella Ramsey, 19, who shot to fame in The Worst Witch and Game of Thrones, is the latest British export to impress Hollywood after landing role in HBO’s The Last of Us

She landed her first major role in children’s TV favourite The Worst Witch just six years ago, but Bella Ramsey, now 19, is fast becoming a powerhouse of British acting.

The Nottingham-raised actor’s star has been firmly in the ascendance since she won the role of Lyanna Mormont in HBO’s uber successful fantasy series Game of Thrones in 2016.

Bella, who revealed last week she is gender fluid and ‘doesn’t care’ about pronouns, is now starring in HBO’s newest hit project The Last of Us, beside the Chilean-American actor Pedro Pascal, who also rose to fame on Game of Thrones, playing Oberyn Martell.

Alongside her CBBC role as Mildred Hubble, the Midlands star, who is the daughter of a businessman but rarely comments on her home life, also appeared in His Dark Materials, and earned herself a Critics Choice Awards nomination in the Best Young Performer category for her role in Lena Dunham’s Catherine Called Birdy. 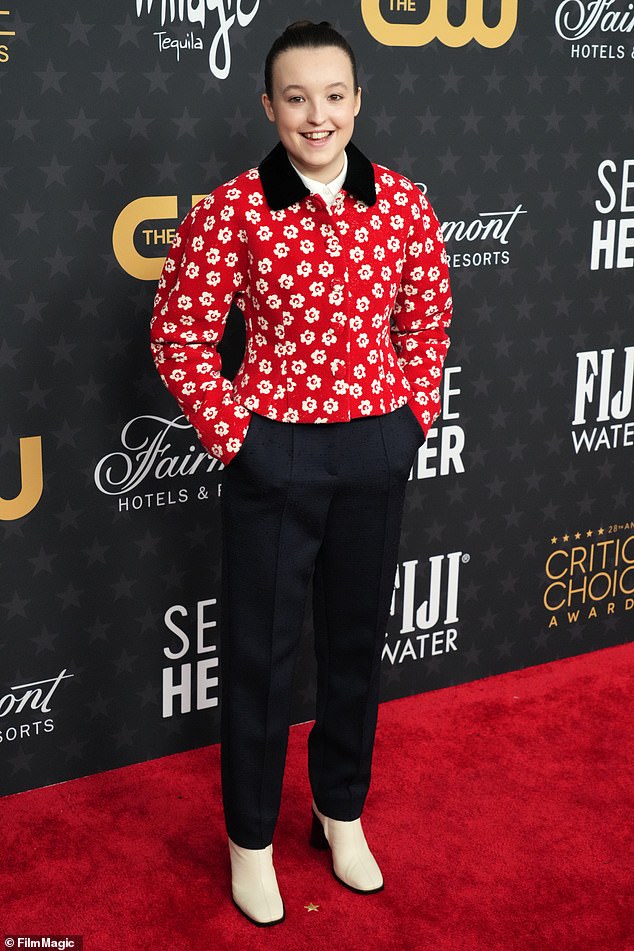 Bella Ramsey, 19, is the latest British actress enjoying her time in the spotlight, after a breakout role in Game of Thrones in 2016 kickstarted her career. Bella sporting a floral look on the red carpet of the Critics Choice Awards in Los Angeles last night, where she was nominated for Best Young Performer

Bella was just 14 when she first appeared in Game of Thrones’ sixth season as Lyanna Mormont, a no-nonsense teenager in charge of the House Mormont, who proves to be fearless warrior and a loyal ally of Jon Snow.

Viewers immediately fell in love with Bella in the role, and she became a fan favourite up until her character’s death in season eight – she currently has 795,000 followers on her Instagram account.

Bella had such an impact on the show that she revealed last week that fans still rant to her about its controversial ending, which aired in 2019.

Speaking on Jimmy Kimmel Live, she said: ‘People like to ask me what I thought of the ending. And I ask them back, “What did you think of it?”‘ 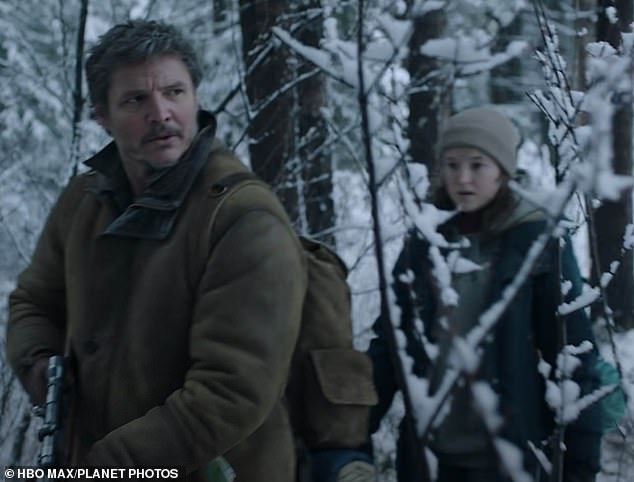 The Nottingham-born actress is now starring in HBO’s latest stand out show, The Last of Us, with Game of Thrones’ alum Pedro Pascal 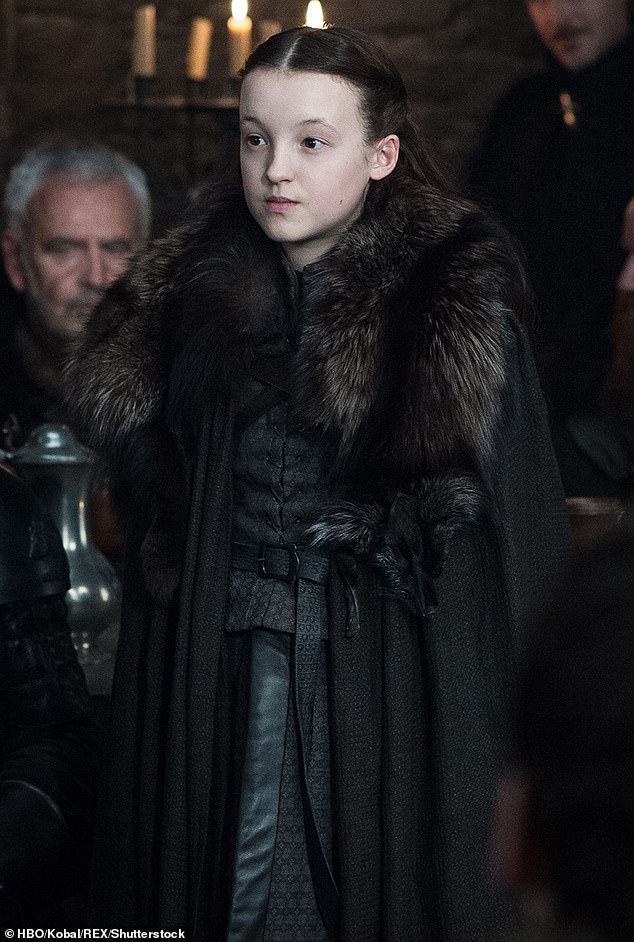 Her Game of Thrones character, Lyanna Mormont, became an instant fan favourite after she appeared on the show’s sixth series 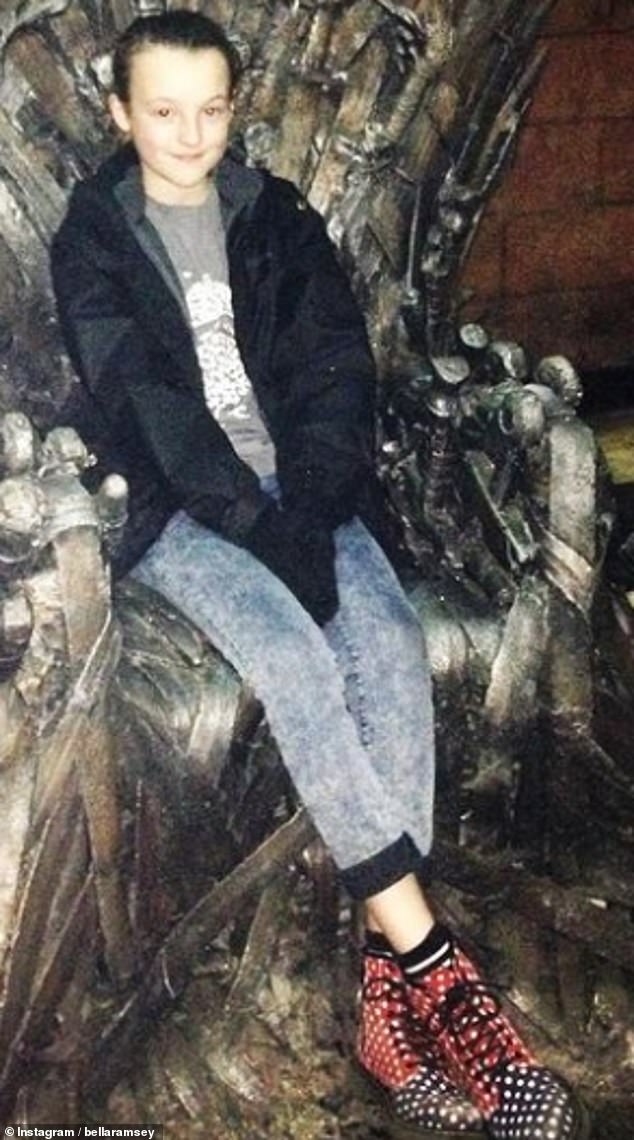 Bella’s appearance as Lyanna on Game of Thrones was her first big role, and she remained on the show until her character was killed off during a battle scene in the show’s last series

‘I don’t have an opinion. I just let them either hate on it or talk about how great it was — mostly hate on the ending for like 10 minutes, and then I just sit there and listen and then say, “Goodbye, nice to meet you,” and then that’s it.

‘Generally, the consensus is that it wasn’t great… It seemed fine to me,’ she added.

Her first main role came as Mildred Hubble in The Worst Witch on CBBC.

The BBC adaptation, based on the 1974 novel by Jill Murphy, followed schoolgirl Mildred, who discovers she is a witch and is admitted to a special school where she learns more about her power.

The show, which is also available to stream on Netflix, was a huge hit with younger audiences, and kept Bella as its main character for three series from 2017 to 2020, when she was replaced by Lydia Page after stepping down from the role.

Sharing the news with fans at the time, she wrote on Instagram: ‘It was completely my decision to say goodbye for reasons I can’t really go into but to everyone reading this, please prioritise your mental health and do what’s right for you.’ 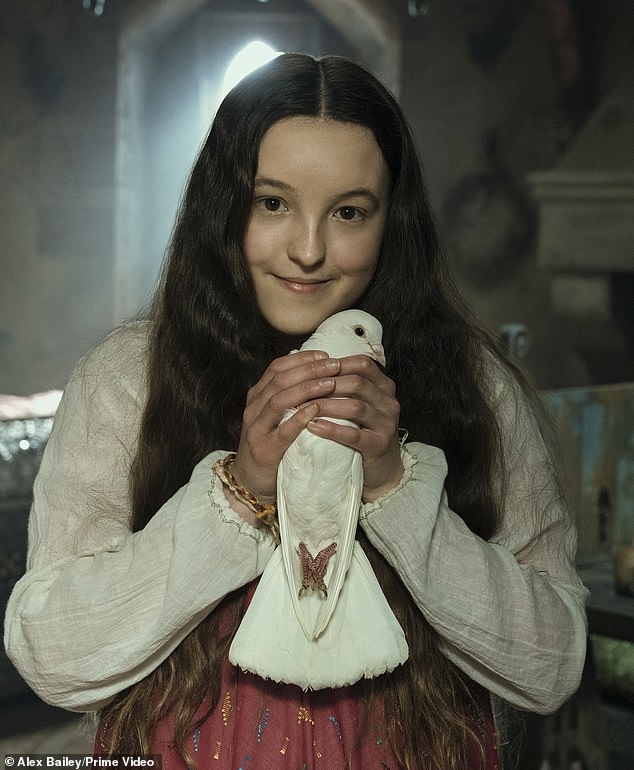 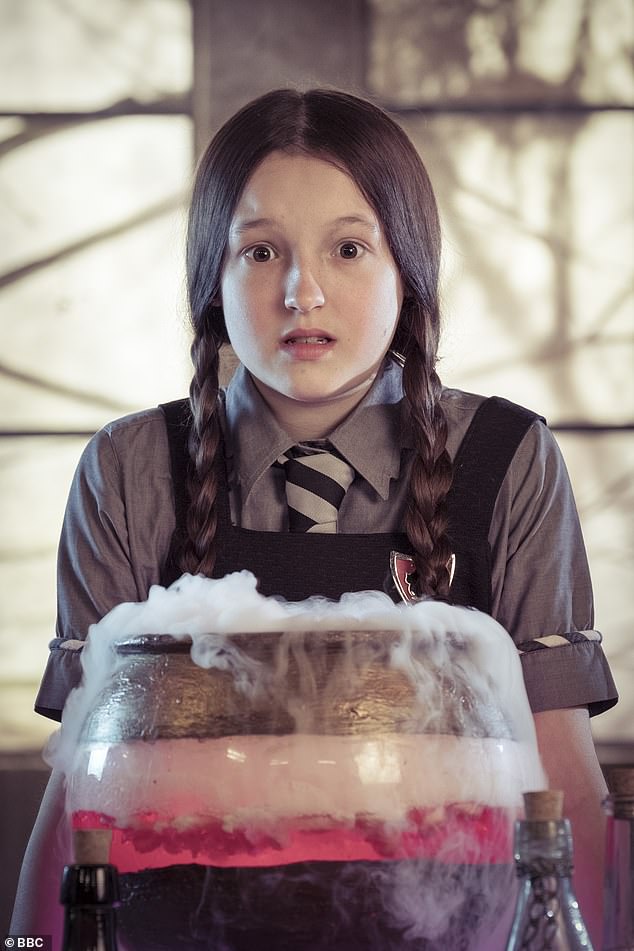 And the young actress was nominated for two BAFTAS in 2018 and 2019 for her role as Mildred Hubble in CBBC’s The Worst Witch. She won the award in 2019

Her role as Mildred earned her three BAFTA nominations. In 2018, she was nominated both for Best Breakthrough Talent and Best Young Performer. While she didn’t win that year, she bagged herself the award in 2019 in the Best Young Performer category.

She also won the award for Children’s Animation, which she shared with Luke Pearson, Stephanie Simpson, and Kurt Mueller, for her voice work in the Netflix animated series Hilda, where she plays the main character.

In 2017, she also had a small role on the BBC’s adaptation of Philip Pullman’s His Dark Materials, alongside Dafne Keen.

In 2019, she had her first taste of the big screen with a small role as Lorna Luft in the biographical movie base on the life of Judy Garland – known as ‘Judy’, which earned Renée Zellweger an Academy Award for Best Actress.

Bella is now collecting award nominations of her own, being among this year’s nominees for Best Young Performer at this year’s Critics Choice Awards for her role as Lady Catherine/ Birdy in Catherine Called Birdy.

The feature, written and directed by Lena Dunham, follows a 14-year-old girl in Medieval England as she navigates through life.

While she didn’t win the award – which went to Gabriel LaBelle for his role as Samuel ‘Sammy’ Fabelman in The Fabelmans – Bella’s star is in the ascendance. 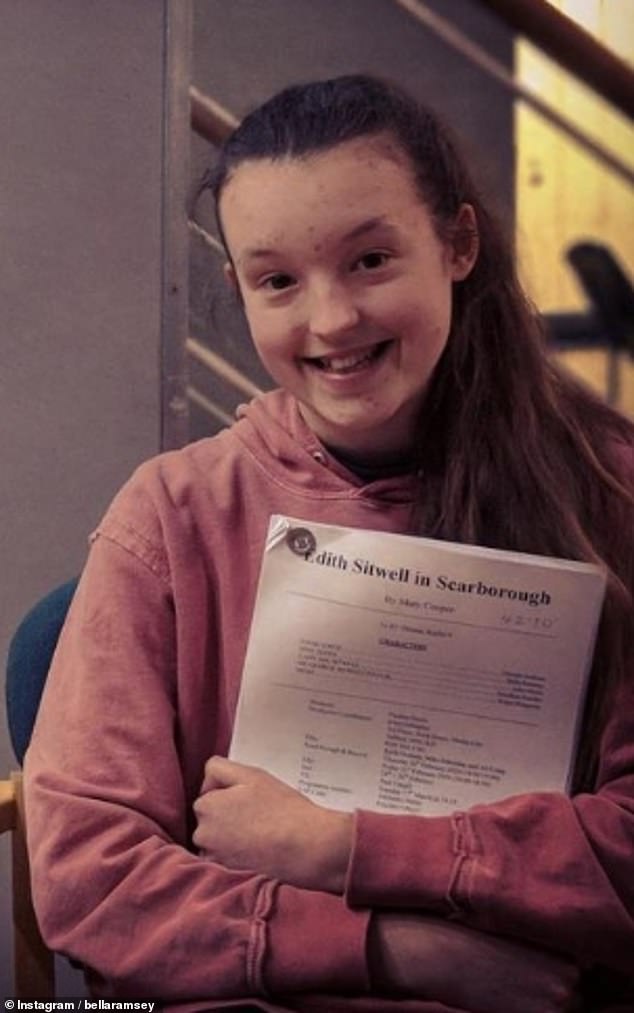 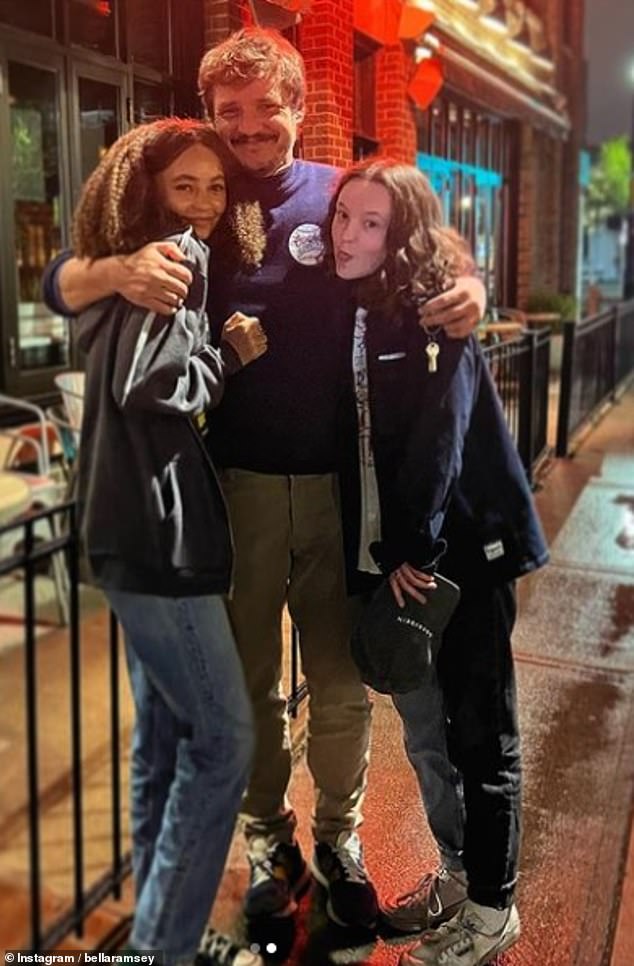 Bella with her Last of US costars Pedro Pascal and Nico Parker. The show premiered over the weekend to rapturous applause from fans

She’s winning over new audiences in HBO’s new hit series The Last of Us, where she stars alongside Game of Thrones’ alum Pedro Pascal, after it was released on HBO and Sky Atlantic over the weekend.

The Last Of Us was first released on the Playstation 3 in 2013, and took the gaming world by storm, selling 1.3 million units in its first week and over 17 million by 2018.

The game is set 20 years after a pandemic wiped out most of the world, centering on Ellie, who may be integral to curing the pandemic, and a smuggler named Joel.

Bella plays Ellie, a 14-year-old orphan, who struggles with learning she may have a big role to play in saving the world as she knows it. She stars alongside Pedro Pascal as Joel. 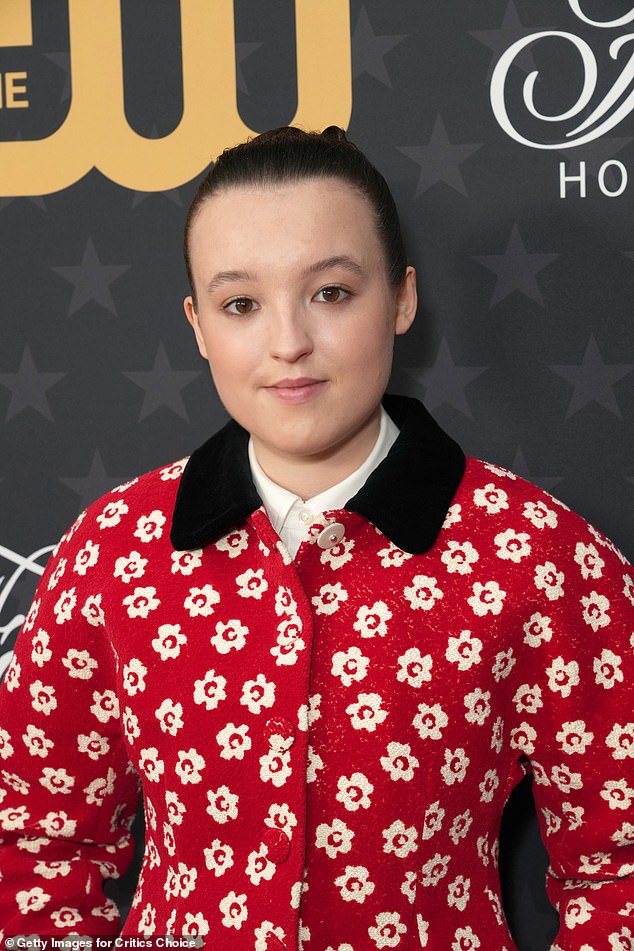 Bella says she’s ‘gender-fluid’, telling the New York Times in a recent interview that she found it ‘exciting’ when she was referred to as ‘he’ 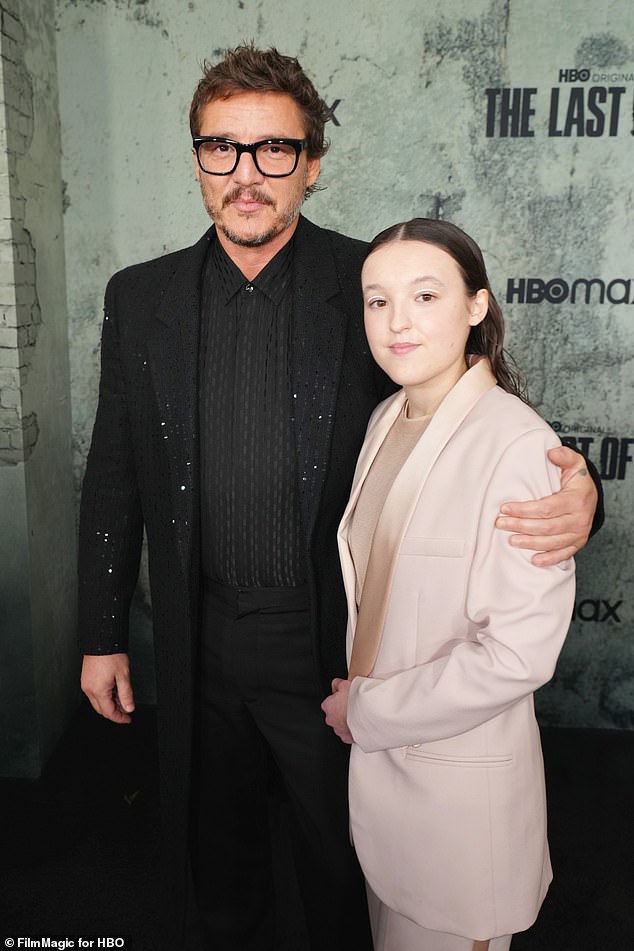 Hollywood: Bella with Pedro Pascal at the The Last of Us Los Angeles Premiere last week

The game is considered by many to be one of the greatest of all time, which lead to the sequel, The Last Of Us Part II, released in June 2020.

The sequel sold more than 4 million copies in its first weekend, making it one of the fastest-selling PS4 games.

Before this new HBO series came to fruition, the game was previously in development as a movie adaptation at Sony Pictures. It will be released on January 15.

The young actress keeps her Instagram about her work, sharing glimpses of life on set and rarely opening up about her personal life.

While she has share very limited information about her father, a businessman, and her mother online.

She has however spoken of how supportive her family have been of her acting career.

Asked how her family and friends reacted to her landing the lead role in The Worst Witch in 2016, the budding actress told the BBC: ‘They are all very proud and supportive. When we got the phone call I was with my mum, sister, cousin and auntie, there was a lot of screaming and excited jumping, you could have filled a bathtub with the proud teardrops!’

She started acting from the age of four after joining a local Stagecoach group with her sister.

Bella attended King’s Interhigh’s online school, because she ‘didn’t enjoy mainstream secondary school and wasn’t happy’ and also because of her acting career, she admitted on the institution’s website in 2021.

‘I think it allows people to be who they truly are and it leaves room for people to do the non-academic things they love,’ she added.

She has revealed she is gender-fluid, telling the New York Times that she found it ‘exciting’ when she was referred to as ‘he.’

She said: ‘I guess my gender has always been very fluid. Someone would call me she or her and I wouldn’t think about it, but I knew that if someone called me he it was a bit exciting.’

The star said she ticks ‘non-binary’ if it is an option on a form, before adding: ‘I’m very much just a person.

‘Being gendered isn’t something that I particularly like, but in terms of pronouns, I really couldn’t care less.’

Bella joins other famous faces who have come out as gender-fluid or non-binary.

Emma Corrin identifies as non-binary and goes by they/them pronouns as of 2021 while Sam Smith revealed they were non-binary in 2019.