Home » Lifestyle » Which 'RuPaul's Drag Race' Christmas Special Queens Will Be on 'All Stars 4?' – The Cheat Sheet 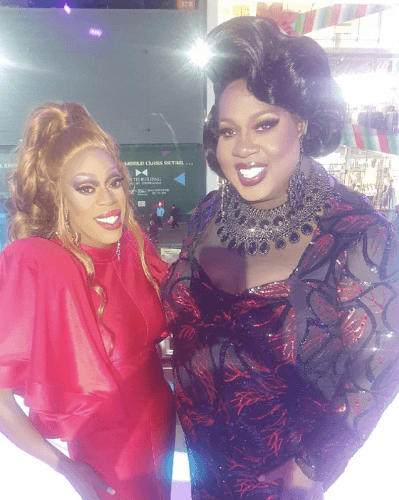 Which 'RuPaul's Drag Race' Christmas Special Queens Will Be on 'All Stars 4?' – The Cheat Sheet

As RuPaul’s Drag Race fans eagerly await the fourth installment of All Stars, they’ll be treated to this delicious Christmas treat. RuPaul’s Drag Race Holi-slay Spectacular promises nothing short of glitz, glamour, and fierce competition. Eight fabulous performers will be slugging it out for the title of Drag Race Xmas Queen.

The Christmas special is smartly scheduled six days before RuPaul’s Drag Race All Stars 4. Which means fans get extra drag candy. The lineup includes Mayhem Miller, Sonique, Eureka O’Hara, Trixie Mattel, Shangela, Kim Chi, Latrice Royale, and Jasmine Masters. And while each queen is a Christmas star in her own right, only two from the Holi-slay Spectacular will also appear in next week’s All Stars season. Which two performers will be in both the Christmas special and All Stars?

Fans will be treated to the lovely Jasmine Masters’ unique brand of humor in both the Christmas special and All Stars 4. Masters was a contestant on RuPaul’s Drag Race season 7 and today is known as a “meme queen.” She’s widely known for posting hilarious videos to YouTube, which often have thousands of likes and endless comments.

Not one to gloss over “I have something to say,” Masters likes to tell it the way it is. Her “in your face” off the cuff style of connecting with her fans is what makes her a favorite. But, her truth-telling has gotten her into hot water in the past. She lashed out at RuPaul’s Drag Race on YouTube referring to the show as “f**ked up drag, bottom line, cut and dry.” Initially, Masters received considerable backlash. However, fans eventually softened about the rant. Which ended up sashaying Masters into the queen of meme.

An all-time fan favorite, Latrice Royale brings her chunky yet funky brand of class, grace, and humor to both the Christmas and All Stars shows. Royale was featured on RuPaul’s Drag Race season 4 and appropriately won the title of Miss Congeniality. During season 4, Royale’s easy but fierce approach to not only drag but how she interacted with other contestants made this queen a fan favorite. The star revealed she had spent time in prison and never connected with her father due to how he treated her mother.

Royale returned to the RuPaul family for All Stars season 1. She and queen Manilla Luzon teamed up to form the badass two-some, “Latrila.” While Royale and Luzon won the first few challenges they lost the third. Their swansong was extremely emotional. Which is why fans are gearing up for this season of All Stars. Luzon returns, along with Royale to resurrect, Latrila. Muhaha.

Spoiler free insight into RuPaul’s Drag Race Holi-slay Spectacular includes the lineup and also the judges. In addition to RuPaul, buddy Michelle Visage will be judging too, USA Today reports. Also, Todrick Hall and Ross Matthews will be part of the fun. Both Visage and Hall are featured on RuPaul’s 2015 Christmas album, which will be included in the special.

The show promises RuPaul’s brand of comedy and sass too. But it will be more music and less drama, USA Today reports. In addition to an emphasis on RuPaul’s Christmas tunes, queens will share holiday memories and lots of festive choreographed holiday combinations.

Game of Thrones: Richard Madden won't be in the reunion