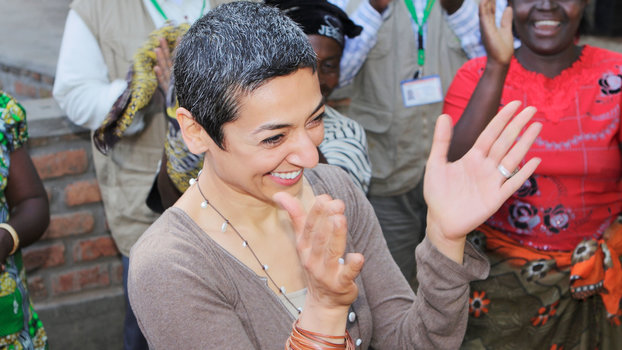 What I've Learned from Helping Women in War-Torn Countries

I was 23 when I first read about the war in Bosnia and Herzegovina. News reports described concentration camps where women were raped day in and day out for months at a time. I was horrified and wanted to do something to stop such atrocities. The problem was, I had no resources. I had been living in America for only three years after emigrating from Iraq to flee Saddam Hussein’s regime. My family had stayed behind. My new husband and I were students with very meager finances. Yet I still felt compelled to help.

When I was growing up in Iraq, fear dominated my life — fear of speaking my mind and upsetting the government, Big Brother, which could be watching me at any time. Living in America meant that I was free to act, speak, and do what I believed in for the first time. I could not take that freedom for granted.

RELATED: How to Deal With “The Panic and Horror That Is Being a Human Right Now,” According to Comedian Aparna Nancherla

I decided to join protests against the genocide in Bosnia. It felt great to chant slogans about peace and liberation with thousands of strangers. But by the third demonstration I realized I had to do more than just march. So, in 1993, I started the nonprofit Women for Women International and asked for donations. By giving a Bosnian woman $30 a month and a letter or picture, U.S. sponsors were able to forge a friendship and cultivate a thread of hope.

I had no idea who would respond to my call or whether anybody even cared. But soon afterward, strangers began showing up out of nowhere. Local churches, schools, and synagogues invited me to speak about the Bosnian War and asked how they could help those affected by it. Once I had 30 sponsors, I set out to personally deliver their money and letters to women in refugee camps at the Bosnia-Croatia border.

The women I met there had gone through unspeakable horrors. But in their sadness and trauma, I also saw generosity and beauty. One refugee offered me precious fresh water that she had kept hidden under her bed. It was all the water she had had. An older woman told me about carrying her husband on her back as they escaped a bombing. Eventually, I realized that, indeed, war shows us the worst of humanity, but it also shows us the best. I witnessed beautiful souls resist not with guns but by keeping hope, generosity, and kindness alive.

RELATED: Legendary Lawyer Gloria Allred Has Been Fighting for Women for 42 Years

At 23, I thought I was on a mission to change the world. Now I realize that going into war-torn countries has changed me. My work has taught me to appreciate beauty and kindness in people no matter what pain they are going through. These days, when I read horrible news, I search for the people, the women in particular, who are doing everything they can to actively bring goodness back into this world. That is the triumph of hope.

Salbi’s book Freedom Is an Inside Job: Owning Our Darkness and Our Light to Heal Ourselves and the World is out now.

For more stories like this, pick up the January issue of InStyle, available on newsstands, on Amazon, and for digital download now.