Home » Lifestyle » What It’s Like To Celebrate The Holidays When You’re 9,000 Miles Away From Your Family 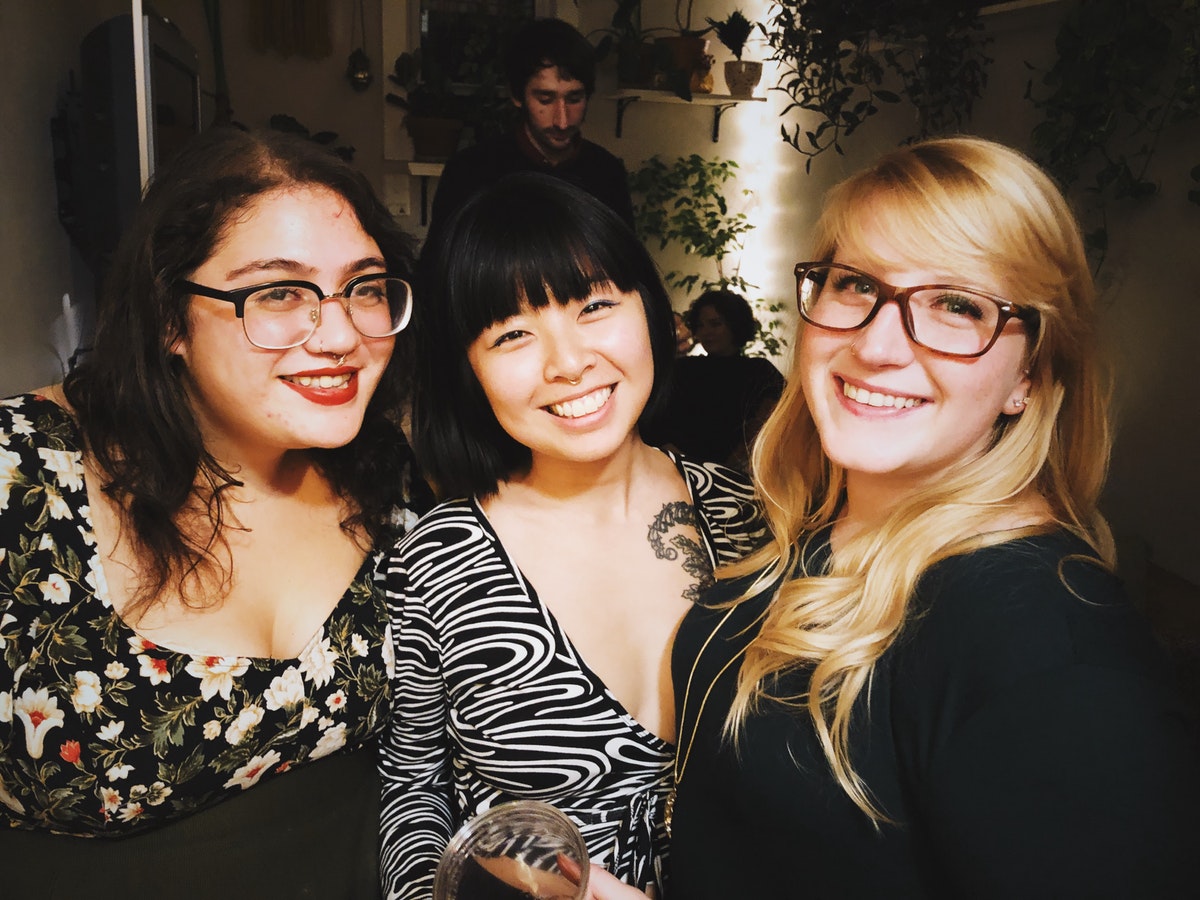 What It’s Like To Celebrate The Holidays When You’re 9,000 Miles Away From Your Family

The one memory I have of celebrating Christmas in Malaysia was when my family fought over a bird. Every single holiday back home involves eating as much food in as many places as you can, and for some reason that year, my parents were feeling ambitious about celebrating Christmas, even though we never had before. I don’t remember if we were trying to cook a chicken or a turkey, but it was an attempt so fraught — literally, there were way too many people who thought they were cooks in the kitchen — that by the end of the day no one was talking to each other.

I feel as ambivalent as ever about Christmas now that I live in New York City, and Thanksgiving is a holiday too loaded with ugly history for me to want to enjoy. But the commercialization of the holiday season is effective as hell, and it inevitably pulls you in and makes you want to do things like put up string lights around your apartment.

As many immigrants living in the United States might tell you, the holiday season is one of experimentation, and more often than not, loneliness. I’ve celebrated the holidays in different ways over the years, depending on whatever stage of life I’ve been at at the time. If I have friends visiting New York, how badly do they want to go on a Black Friday shopping spree? If I’m dating someone that year, will they invite me to their parents’ home? If I’m working that day, how much worse is the knowledge that everyone else is with their families, while I’m more than 9,000 miles away from mine?

More recently, my friends and I have kept up the annual tradition of a Friendsgiving potluck. The spread grows more elaborate and adult each year (though the boxes of wine are a staple), and I always make a steaming pot of assam curry, both to complement the mac and cheese (trust me), and as a private little effort to bring something from my culture to this very American party.

And by the end of the day, I’m almost guaranteed to be sprawled on a couch somewhere, most likely unbuttoning my pants and rubbing my belly. 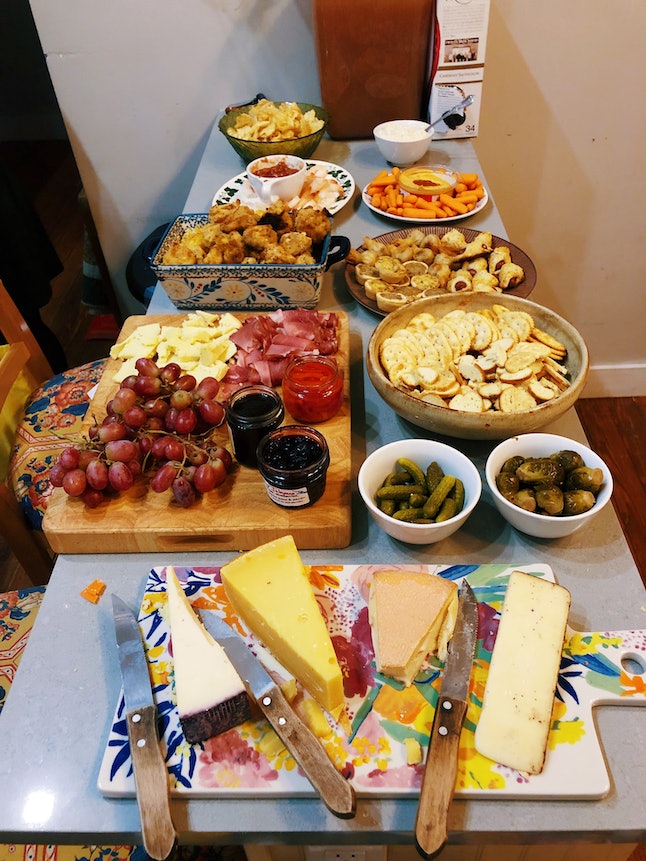 When Shiva Ramachandran moved to Oregon from India for college in 2008, she was one of the RAs who stayed behind during the Thanksgiving holidays. “We would have potlucks. … Everyone else had family,” she tells Bustle, and “it would be the international students doing the potluck because we didn’t have anywhere to go.”

Ramachandran, 29, says she and her sister, who was in San Francisco at the time, would also make tandoori chicken and watch Bollywood movies on Thanksgiving. After the first few years, they started dipping their toes in traditional American food. One year, they hunted down the “most extravagant recipe” they could find and ended up making bacon-wrapped turkey.

“We didn’t even know how to clean it or the whole thing you do when you prep it and stuff,” Ramachandran recalls. “We had no idea how to make it.” 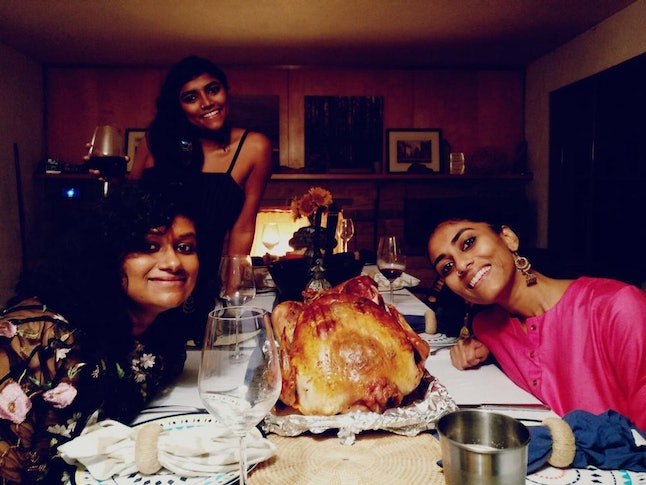 Immigrants have long fused their traditions with American celebrations. Emaan Majeed’s family didn’t immediately take to American holidays when they moved to Texas from Pakistan in the ‘90s, but like many immigrant families, they later embraced them in their own unique way.

“There was considerable stigma in the Pakistani-American community around giving in to the Western traditions,” Majeed, who is 22, says. “But my brother and I, having watched all the holiday specials on TV and expecting some of our own, made the decision for them.” Majeed and her brother ruled that they’d celebrate not just Thanksgiving and Christmas, but Halloween and Easter, too.

Their Thanksgiving celebrations, Majeed says, first started with Black Friday. But as they grew older, the family decided that they wanted a Thanksgiving meal, too.

The first few times her family celebrated Thanksgiving proper, Majeed says that they “copied what they did in the movies to a T.” And it was good, but felt like it was missing something. So they got a little more experimental: One year, they made Lahori charga, a chicken dish, instead of a turkey; another year, they cooked a turkey slathered with Desi spices on a bed of biryani.

“Our side dishes would be a mix of American staples and Pakistani dishes that we thought fit the culinary aesthetic of Thanksgiving. We had a lot of fun mixing and matching,” Majeed says, “and it brought something new to each year’s celebration. I couldn’t ignore Christmas if I wanted to. Once Halloween is over, it’s like this country bursts into snowflake motif-coffee cups and Santa hats at dollar stores that go missing immediately after you buy one. The neighborhood I live in in Queens, New York, lines the street lamps in light decorations, and as the holidays approach, loudspeakers on the street blast "Let It Snow! Let It Snow! Let It Snow!" on repeat.

For Ramachandran, being able to celebrate holidays like Thanksgiving makes it easier to be away from India. "I’m here for my career. My sister’s here for her career," she says. "And when you’re an immigrant, that becomes your whole life, kind of? … But then when you have these holidays it really helps give more depth and value to your experience as an immigrant here." 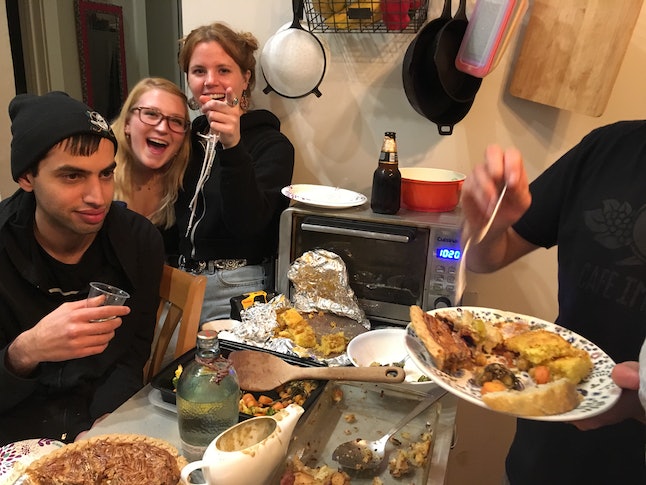 And you know what? There is something almost unnervingly comforting about taking part in a celebration around food and the people you love.

Give me all the stuffing — and drown it in curry, thanks.