Home » Western U.S. may be entering its most severe drought in modern history 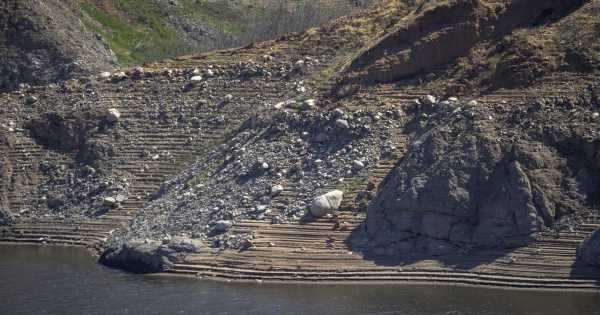 Western U.S. may be entering its most severe drought in modern history

Extreme drought across the Western U.S. has become as reliable as a summer afternoon thunderstorm in Florida. And news headlines about drought in the West can seem a bit like a broken record, with some scientists saying the region is on the precipice of permanent drought.

That’s because in 2000, the Western U.S. entered the beginning of what scientists call a megadrought — the second worst in 1,200 years — triggered by a combination of a natural dry cycle and human-caused climate change.

In the past 20 years, the two worst stretches of drought came in 2003 and 2013 — but what is happening right now appears to be the beginning stages of something even more severe. And as we head into the summer dry season, the stage is set for an escalation of extreme dry conditions, with widespread water restrictions expected and yet another dangerous fire season ahead.

The above image is a time series of drought in the western states from 2000 to 2021. This latest 2020-2021 spike (on the right) is every bit as impressive as the others, but with one notable difference — this time around, the area of “exceptional drought” is far larger than any other spike, with an aerial coverage of over 20%. As we enter the dry season, there is very little chance conditions will get better — in fact it will likely only get drier.

With this in mind, there is little doubt that the drought in the West, especially the Southwest, this summer and fall will be the most intense in recent memory. The only real question: Will it last as long as the last extended period of drought from 2012 to 2017? Only time will tell.

Right now, the U.S. Drought Monitor places 60% of the Western states under severe, extreme or exceptional drought. The reason for the extensive drought is two-fold; long term drying fueled by human-caused climate change and, in the short term, a La Niña event in which cool Equatorial Pacific waters failed to fuel an ample fetch of moisture. 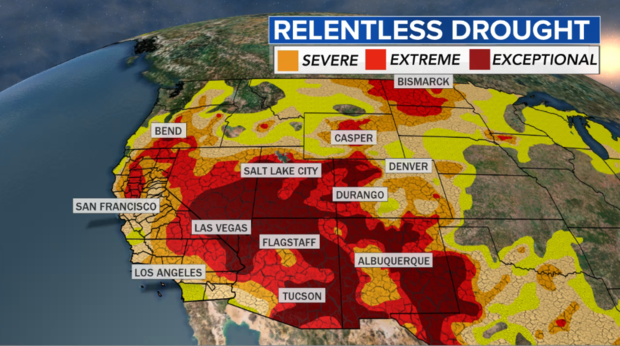 Consequently, this past winter’s wet season was not very wet at all. In fact, it just added insult to injury, with only 25 to 50% of normal rainfall falling across much of the Southwest and California. This followed one of the driest and hottest summers in modern times, with two historic heat waves, a summer monsoon cycle that simply did not even show up and the worst fire season in modern times.

The image below shows what is called the precipitation percentile from October through March, comparing this past six months to the same six-month stretch in each of the past 50 years. 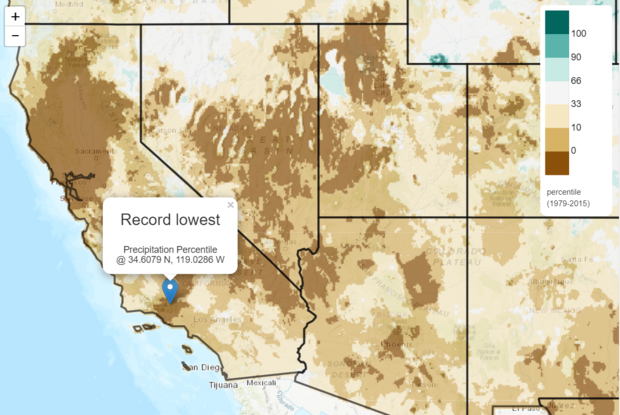 The light brown shading shows areas in which the most recent six-month stretch was in the driest 10% of the last 50 years. The dark brown shade indicates the areas which experienced their lowest precipitation on record during this latest six-month span. Almost all areas are covered by one of those two shades.

Kelsey Satalino, the Digital Communications Coordinator from NOAA’s National Integrated Drought Information System, says that during the past few months, several states including Nevada, Arizona, New Mexico and Utah experienced their most intense period of drought since the Drought Monitor began back in 2000. As a result, soil moisture content is at its lowest levels in at least 120 years.

The Pacific Northwest, however, is faring much different this season. The northern half of the West experienced normal to even above normal snowfall this winter, on par with what is expected during a typical La Niña event featuring a further north jet stream storm track. That good fortune did not extend further south, however, with most areas now at only 50 to 75% of normal snowpack. 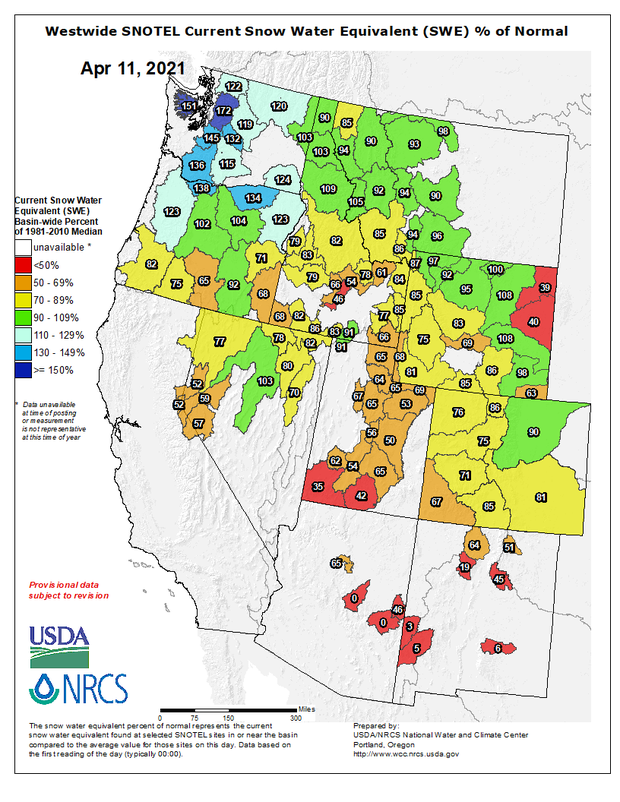 Since the West relies on melting snowpack to fill lakes, reservoirs and rivers, like the Colorado, water availability will be limited this summer. The Colorado River and its tributaries provide water for around 40 million people and 5 million acres of farmland. The amount of water flowing into Lake Powell, on the Arizona-Utah state line, in the coming months is only expected to be around 45% of the typical amount. Lake Meade, on the Arizona-Nevada state line, is only at 40% capacity.

But this lack of snowpack is not a one-time issue; it is a trend. Over the past 40 years, snowpack has declined by about 25% over the Western states. Meanwhile, the population continues to increase. Thus, as of late, water demand has been outstripping what mother nature can deliver. 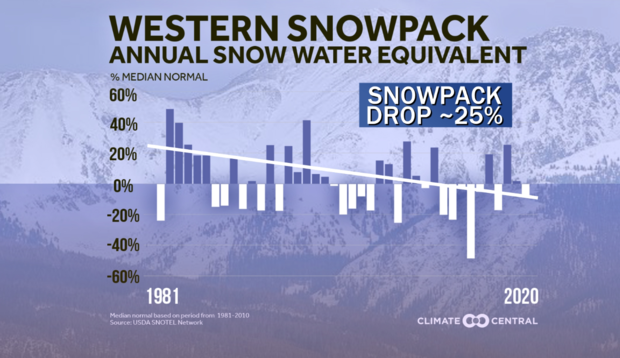 In general, these water woes are not expected to improve. While there will be wet years, the overall trend is towards drying. Scientists say this is a result of human-caused climate change, which is leading to less reliable rain and warmer temperatures — both consistent with what has been projected by climate computer models. The image below shows a clear trend toward worsening drought since 1900. 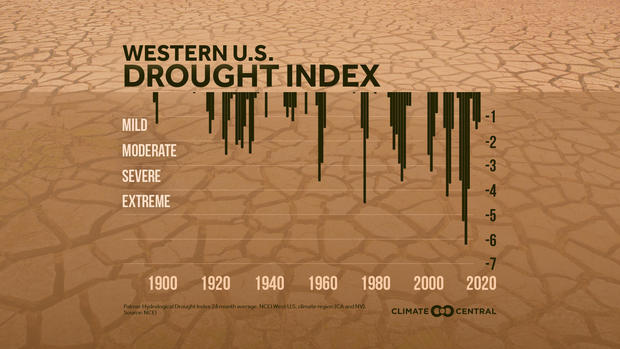 New research from the U.S. Department of Agriculture shows that over the past several decades, precipitation has become more erratic and dry periods between rain storms have expanded. Even if rain or snow falls heavier, that’s less important than consistency. Soil moisture and vegetation thrive on precipitation that is spread out more evenly over time, rather than heavy events which tend to run-off, resulting in wasted moisture.

At the same time, temperatures across the Western U.S. have increased by a few degrees over the past 50 years. The warmer air provides more heat energy to evaporate moisture from vegetation and soil. As a result, the ground continues to dry out, providing flammable fuel for escalating fire seasons.

In fact, 2020 was the worst fire season in the modern history of the West, with California and Colorado experiencing their largest fires on record. As can be seen in the below visual, the intensity of fires and acres burned tracks with increasing temperatures. Simply put, the warmer and drier it gets, the larger fires become. 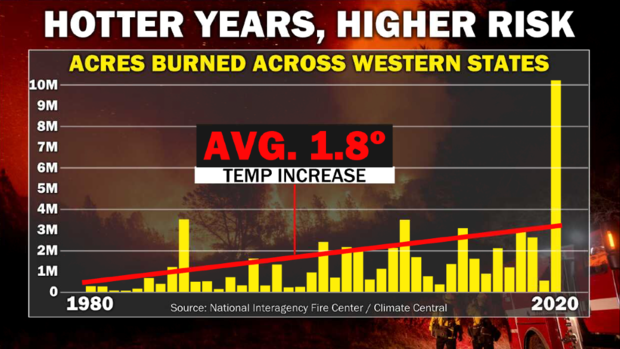 Because of a warming climate, fire season in the West is now two to three months longer than it was just a few decades ago. That means, with the dry season already getting underway in the West, the time to prepare for wildfires is fast approaching.