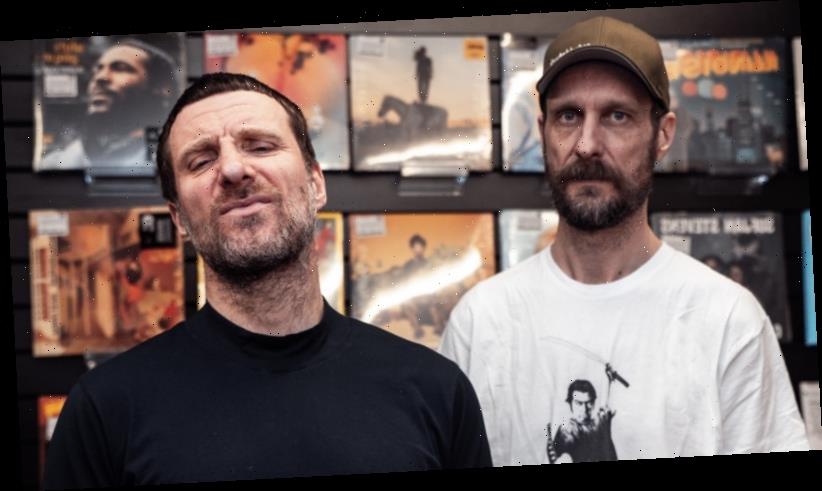 "Dark". That's England from Jason Williamson's window. He means it literally, as the West Midlands winter night continues to steal the lion's share of daylight. But it works figuratively, too. "It's comedy, it’s make-do, it's ignorant and above all, it's shit," was his considered appraisal of his homeland with Sleaford Mods' fourth album, English Tapas.

Their fifth, Eton Alive, acknowledges in one line that he now lives "in a house three times the size of my old one". Still, "all I can see outside the window is the house behind us with its bedroom light on," he reports. "Everything else is pitch black."

Blink and miss it, but that includes his sense of humour. 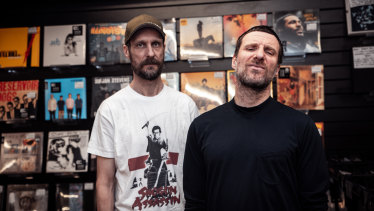 Sleaford Mods' view of working class Britain is not for rose-colouring. Adele or Ed Sheeran or Robbie Williams might have us believe that ordinary, stout-hearted commonfolk can weather any storm and love will conquer all; that the stars are yours for the taking as long as you just believe.

On albums such as Austerity Dogs, Divide and Exit and Key Markets, the two Nottingham malcontents have long begged to differ.

We're just a very small-minded collection of people in a lot of respects. A few of us are trying to break out of that mould but … the aristocracy who still run this country, won't let us. We're still their servants.

"What do I love about England? Oh god," says Williamson, the razor-tongued gutter-poet who brings bilious content to the raw industrial beats of Andrew Fearn.

"I like driving down the motorway looking at the countryside and the farmhouses and the little villages with the churches. I like going on holiday with the family to little quaint English places and eating English food and being very English.

"But apart from that, it really has shown its true colours. We're just a very small-minded collection of people in a lot of respects. A few of us are trying to break out of that mould but you know, the powers that be, the aristocracy who still run this country, won't let us. We're still their servants."

Williamson's perspective on this social stalemate has evolved since his spate of solo demos in 2007 to 2012. Back then, his rage was mostly fixed on his fellow servants in a vicious cycle of squalid nightclub punch-ups and dole queue comedowns steeped in cheap drugs, supermarket lager and stale body fluids. 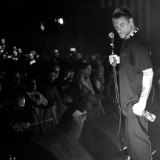 Jason Williamson on stage in November at London’s Hammersmith Apollo.Credit:

The shopfloor thuggery of Rollatruc and Jobseeker! gave way to a bigger picture of institutional oppression as the Brexit farce groaned on. Today, members of government and members of Blur are equally fair game in a relentlessly foul-mouthed reckoning of the terminal British power imbalance.

As with any brand of ghetto hip-hop, Williamson's vernacular might be a little culture-specific for some, but the tone is unmistakable.

"Paul Weller, mainly," he says when asked to trace his inspiration. "The Sex Pistols, Public Enemy, LL Cool J, the Beastie Boys. When I was a kid, I was quite besotted with all those bands. Then Stone Roses, to a certain degree Oasis…"

He trails off there, among the broken promises of New Labour and Britpop. Bitter disappointment with the stultifying state of music is a recurring theme. Whatever you make of Ed Sheeran, it is telling that he and Justin Bieber enjoyed one of Britain's biggest hits of 2019 with a song called I Don’t Care.

"The reason that people like Ed Sheeran are so massive is that he appeals to a lot of people who don't give a f—, just like him," Williamson says. "I mean, he probably does buzz off music; he's a musician. But he's allowed himself to be rolled out on the table and thrown into the frying pan as a pancake, you know what I mean? It's just not very good, is it?"

Williamson says he's heartened by the less compromised voices of working class Britain flourishing in the marginal genres of grime and drill, but the mainstream is awash with "TV talent show contests; that whole culture of bullshit. Most of the big boy bands were working-class kids. Now they're just dumbed down, so to speak''.

"In England, with the indie scene, it's very intellectual I find. It's very harmless and studied and everybody is very fluent in what they do. There's no nastiness to it. And that, to me, would say that there's a distinct lack of working class voices within that genre."

The challenge for Sleaford Mods is to stay nasty, even as their circumstances sweeten. Eton Alive brings a slight softening; possibly even a more melodious attack from Fearn. Williamson's dysfunctional panorama takes in virtue-signalling celebrities, bureaucratic deception, touch-screen-consumer exploitation and an acute seam of self-awareness that peaks with the final track, Negative Script.

"The responsibility that kicks in is to remain honest about it," he says. "I'm not that person I was five years ago. I'm in a different situation in a lot of respects. I've moved up the social scale, so to speak. I now live in an affluent middle-class area and although I'm not rich, I'm certainly not as skint as I was.

"So you've got to be careful. You've got to be aware of that and uphold the realistic circumstances of your situation and obviously make sure those are reflected in your lyrics."

That said, in a world according to Oxfam where one per cent of the population owns more than the other 99 per cent combined, the view from his new house doesn’t change the big picture even slightly. Nor does he harbour expectations that anything ever will.

"I've never been about social change. It was just about railing against," he says. "It was frustration. It was disagreement with the political landscape, but it was never about wanting to change that because that's near impossible. I know that's a defeatist way of looking at it but I don't feel that as a musician, I could change anything on the political front.

"It was just about upholding a responsibility not to talk shit, you know what I mean? And to talk about things that were important, hence depression, political oppression, alienation, anger, frustration and all of the unattractive aspects of my personality as well.

"That's still what it is, really, but with a big two-fingers-up to what people are expecting me to sing about. People want to put you in a box and explain away in a short paragraph what you're about. That's fine, but it's not as simple as that, is it?"

Sleaford Mods will release All That Glue, their forthcoming album retrospective, on Friday, May 15, through Rough Trade/Remote Control Records.

CategoryLifestyle
Tagsservants': Still their Were

Why you should be talking to your kids about coronavirus, says expert