Home » Lifestyle » 'We're just going to walk away from this?' How Minneapolis left a police station to rioters 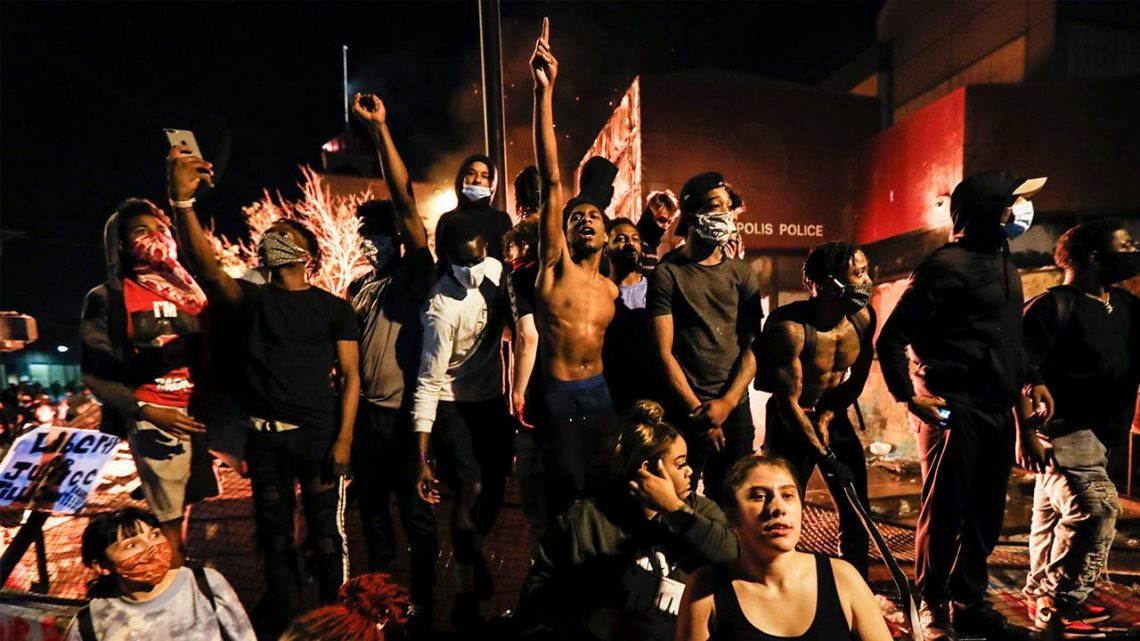 'We're just going to walk away from this?' How Minneapolis left a police station to rioters

MINNEAPOLIS–Police were preparing another round of tear gas to use against a rock-throwing crowd when they got word from Mayor Jacob Frey on the night of Thursday, May 28, to abandon the city's Third Precinct, the station where the four officers charged in the killing of George Floyd had worked.

"Everyone from P3, load up and go," a lieutenant is heard saying just after 10:09 p.m. local time, according to police radio traffic recorded by two websites, Broadcastify and OpenMHz.

"The precinct is on fire," someone relayed about two minutes later.

Mr. Frey has publicly characterized the evacuation of the Third Precinct as a last-ditch decision, made in the heat of the moment, to avoid bloodshed as the city raged over the killing of Mr. Floyd, a Black man, while in police custody three days earlier. 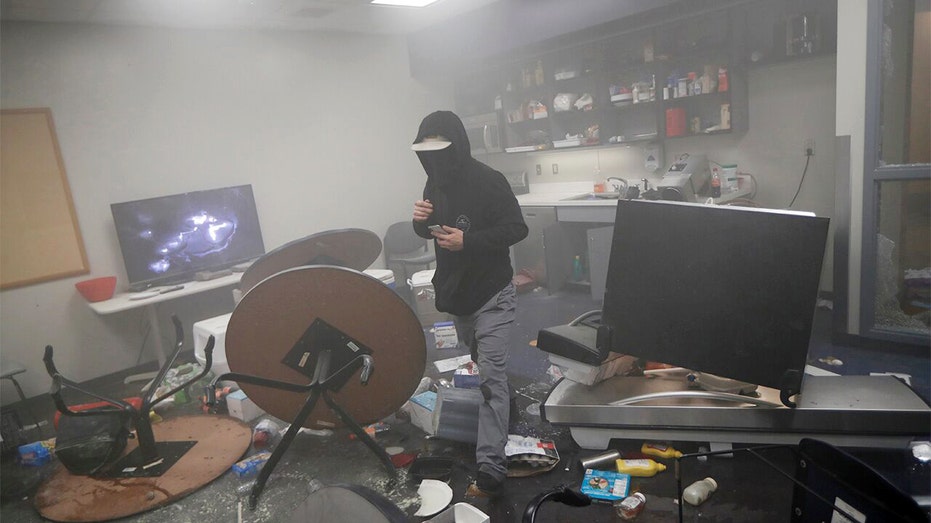 A protester moves around the 3rd Precinct building of the Minneapolis Police Department on May 28, 2020, in Minneapolis. (AP Photo/John Minchillo)

But city leaders, after struggling to marshal sufficient manpower to quell growing unrest, had discussed and planned for abandoning the precinct in advance, as shown by another police-radio transmission from that same moment and interviews with current and former city officials and police officers.

"OK, buses are good to go," an officer said at 10:09 p.m., referring to buses that, as part of the plan, were to be used to transport police away from the riot zone. "Let's round these buses and bounce."

The extraordinary move created searing images of a police building in flames. It touched off a debate over whether the building's abandonment helped save lives in Minneapolis or inspired more violence and destruction in the Twin Cities and elsewhere across the country during this summer's protests against police brutality.

While many of the protests in Minnesota and around the county were peaceful, violence accompanied others. In Minneapolis, anger quickly focused on the Third Precinct, the station where officers charged in Mr. Floyd's killing on Memorial Day had worked. It had spilled to surrounding businesses and into the neighboring Fifth Precinct and beyond by that Friday night.

Bryce Williams, among those charged by authorities with allegedly helping to set fire to the precinct, said it was surreal to see the building burn, according to an interview he gave on Instagram. Mr. Williams, 26 years old, declined to comment on the advice of his attorney but acknowledged he has expressed outrage on social media at how police killed Mr. Floyd and used tear gas against protesters.

"For once we feel like we're in complete control–the police can't do anything," Mr. Williams said in the interview on Instagram. "We're burning down their sanctuary, their home."

The officers had fled the precinct's assault by rioters to meet buses that would remove them to safety. Personnel at a command center watched the destruction on live video feeds, a police official familiar with the station's defense said. Mr. Frey was at home when he ordered the evacuation.

The buses were part of a contingency plan in the works since at least the day before, after protests Tuesday night turned violent. 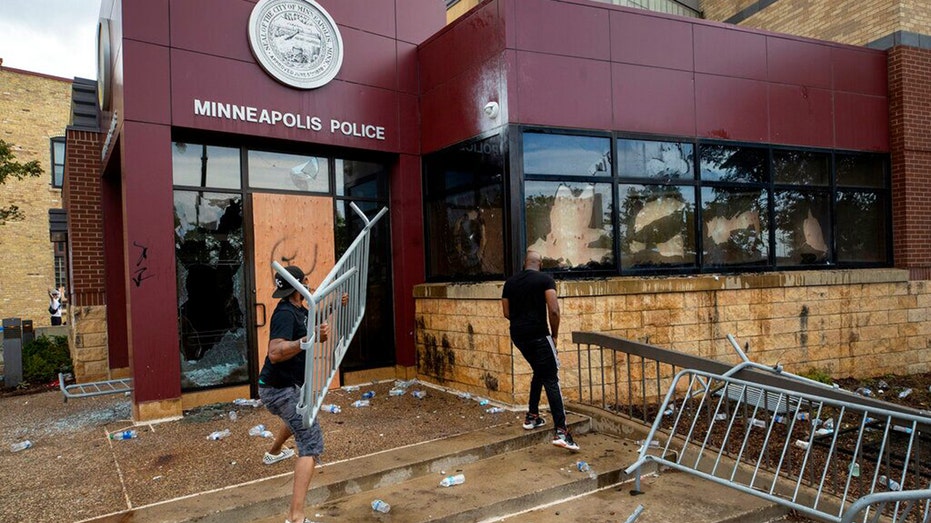 Protesters damage properties at the Minneapolis 3rd Police Precinct in Minneapolis on May 27, 2020. (Carlos Gonzalez/Star Tribune via AP)

That Wednesday, police began clearing out the precinct. City workers would eventually load up trucks with the station's computers and cart away sensitive files and its armory of long guns and other weaponry.

The Minneapolis Police Department hasn't determined how much police gear, including bullets and batons, was lost to rioters, an agency spokesman said last week. While police believe few weapons were left in the building, he said it is possible sensitive investigative files were stolen or burned.

The Third Precinct, which covers southeast Minneapolis, is the largest in area of the police department's five precincts. It housed a 311 nonemergency center and a backup 911 operation.

Lt. Bob Kroll, president of the city's police union, blamed the destruction on a political decision to let rioters win. "It just empowered them, and they went on the rest of the night to destroy all of the south side of Minneapolis," he said in an interview.

Mr. Frey said city officials took precautions for a possible evacuation given limited manpower to defend the building and respond to swelling numbers of looters and arsonists around the city, but they didn't intend to sacrifice the building to appease protesters.

"Imagine the destruction if a member of the public or one of our officers had died," Mr. Frey said in an interview.

Tension had been building since Tuesday, May 26, when video of Mr. Floyd's fatal encounter with police emerged. During the day, there were peaceful protests and remembrances of Mr. Floyd. At night, an angry crowd gathered around the precinct building, smashing the glass in the front door and breaking the windows of squad cars, according to Broadcastify.

"Entire crowd's in our back secure lot," someone said in a radio transmission at 7:44 p.m. that evening. "They have access to all of the squad cars and all of the weapons in the squad cars."

Seconds later, a command went out to deploy tear gas to disperse the crowd, according to another police radio transmission captured by Broadcastify.

Tuesday night's violence caused police to begin taking steps on Wednesday to clear out the Third Precinct, which they fortified with cement barriers, metal gates and fencing. They hauled away photos taken once every five years of every officer working at the station.

Crowds broke into a nearby Target store and carried out electronics, diapers, and other items. Mr. Frey said he got an urgent call from Minneapolis Police Chief Medaria Arradondo around 6 p.m. that night.

"He said, 'If things continue to progress as they are, we will not have the resources or personnel to handle the unrest,'" Mr. Frey said. "I immediately hung up with the chief and called the governor and requested the National Guard." 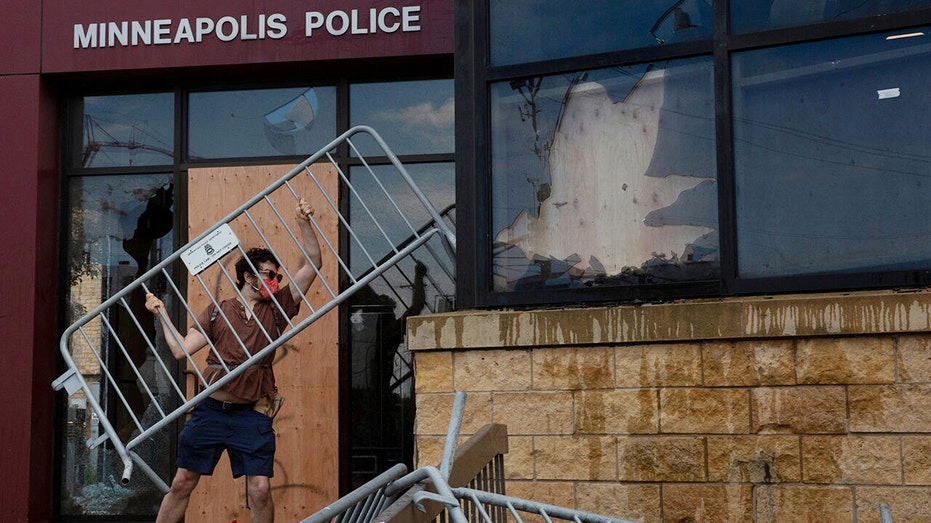 A man uses fencing to strike the Minneapolis police 3rd Precinct building during a protest on May 27, 2020, in Minneapolis. (Christine T. Nguyen/Minnesota Public Radio via AP)

Her proposal: Evacuate and pull out all police from the precinct, a move she viewed as "the best de-escalation option that we had."

"'Should we do that even if it burns down?'" Ms. Cano, who heads the council's public-safety committee, recalls Mr. Frey's aide asking. "And I said, 'Absolutely, I would much rather have a burned-down building than another dead person, an innocent protester or multiple innocent protesters.'"

A spokesman for Mr. Frey said the mayor considered her feedback along with that of dozens of other officials, business leaders and community advocates.

On Thursday morning, as firefighters worked to tamp out still smoldering fires, officers were told to clear out their personal lockers, and some who couldn't make it had their locks cut and contents cleared, they said. Officers grabbed awards from walls and ran up and down stairs.

"It was chaos," said Officer Rich Walker Sr., a union board member, who abruptly left a board meeting when told he had to go clean out his locker.

Mr. Frey says the city simply didn't have enough officers to defend the precinct and respond to widespread looting and rioting. "If we devoted all of our police officers to the Third Precinct, of course we could have defended it," Mr. Frey said. "But then they wouldn't have been doing anything else."

The Minneapolis Police Department didn't initiate a so-called Phase 3 Call Back, its highest-level activation for sudden emergencies. It would have required officers to work 12-hour shifts, rather than for eight or 10 hours, and sent nearly all sworn officers–including plainclothes investigators–out in their uniforms, current and former police officials said.

The Minneapolis police spokesman said 835 officers, or nearly all of the approximately 850-strong police force, worked throughout that Thursday. The department opted for what he described as a more flexible response to a dynamic situation. "Most officers worked the vast majority of the day," he said.

Police beefed up the perimeter fencing around the Third Precinct and reduced their presence on the street in the immediate area, a move city officials said aimed to ease tensions with the crowd. About 55 officers remained inside the station, while those who specialize in tactics such as deploying tear gas took up positions outside, according to the agency spokesman. State troopers were deployed to a downtown mall that night to prevent looting, a state police spokesman said.

Around 9:20 p.m., some in the crowd shared instructions for making Molotov cocktails, according to a video posted to social media that was later cited by a federal agent in court documents. Discussion touched on whether alcohol or petroleum burned more effectively.

At the Third, officers on the precinct's roof and in its parking lot hurled tear gas canisters to repel attacks on the building, said the police official familiar with the station's defense.

"We're just going to walk away from this?" one officer asked inside the command center, according to the police official.

By 9:50 p.m., officers at the Third Precinct were clearing the station, with the last few making their way from the roof to the ground floor. Three minutes later, protesters would begin breaching the precinct's fence and throwing rocks at officers leaving the station on foot.

"Without a doubt, we could have held that precinct, because we had already done it two nights in a row," said the police official familiar with the precinct's defense.

The agency spokesman said it wasn't possible to hold the precinct because police didn't have enough personnel. The goal was to preserve life, he said.

After the mayor's order to leave, officers maneuvered an escape route to the south, arriving at a designated pickup point at 10:01 p.m.

"There's no transport here for the officers," someone yelled in a radio transmission recorded by OpenMHz. The reply: "Keep walking south. The buses are ETA 3 minutes."

Elsewhere, a dispatcher urged the buses, which at times got conflicting information about where to head, to find the officers. The police spokesman later said crowds prevented the buses from making it to the precinct as planned.

Then, just before 10:08 p.m., a radio transmission from Minneapolis firefighters captured by Broadcastify, noted some in the crowd had thrown gasoline on the precinct and started a fire.

Federal authorities so far have announced charges against three men, including Mr. Williams, in connection with the precinct's burning. Mr. Frey said parts of the station were salvageable but the city hasn't decided what to do with the building.

A citywide alert recorded by OpenMHz was broadcast on multiple radio channels at 10:14 p.m.: "The Third Precinct has been compromised."

In the wee hours of Friday morning, Mr. Frey arrived at the command center. The mayor offered his appreciation to the people there for their service. "I know that there are probably some people in this room that are upset with me, and I understand that," Mr. Frey told them.

Third Precinct officers are now based at various locations around the city, the police spokesman said. Mr. Walker, who was based at the precinct, said some officers have temporarily been working out of a convention center.

CategoryLifestyle
TagsGoing Just to Were