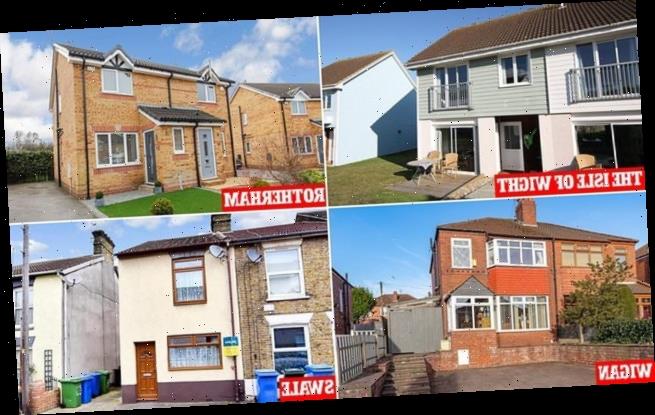 We reveal the hottest property markets in England and Wales

Hottest local property markets in England and Wales revealed: Wigan leads the way with homes taking just 26 days to be snapped up

Wigan is the nation’s property hotspot. The Greater Manchester town is the fastest place to sell a home in England and Wales, with the typical property selling in only 26 days, new research has revealed.

That is 18 days quicker than the average across England and Wales, where homes sold subject to contract typically take 44 days to go under offer, according to the latest figures by property website Zoopla.

Zoopla suggested that Wigan is appealing to buyers due to its good transport links and lower property prices than nearby Manchester. And what buyers want the most there is a three-bedroom semi-detached house, which was the fastest-selling property type in the town. 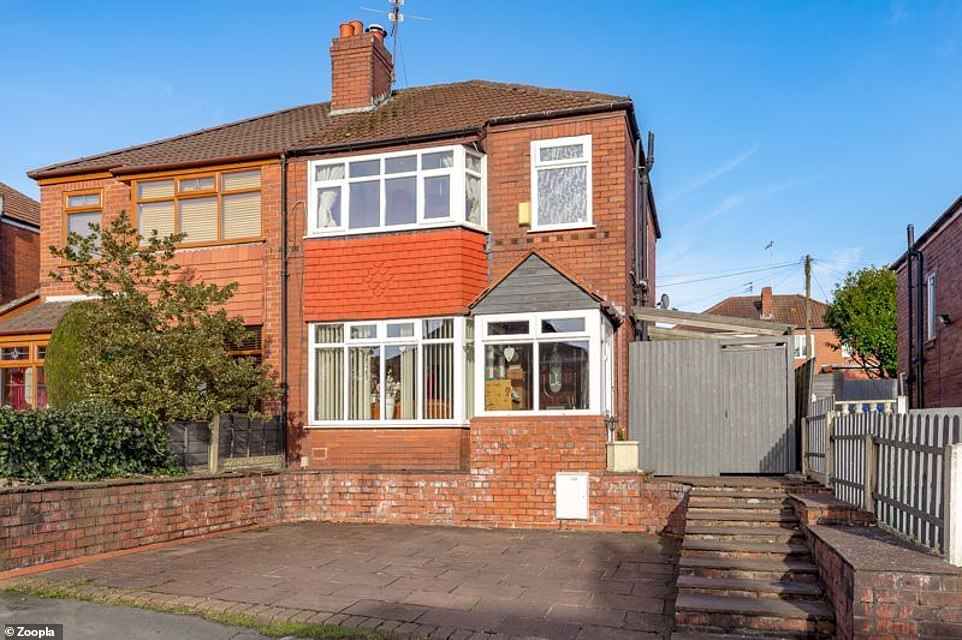 This three-bedroom semi-detached house in Wigan, Greater Manchester, is on the market for £140,000, via Alan Batt estate agents 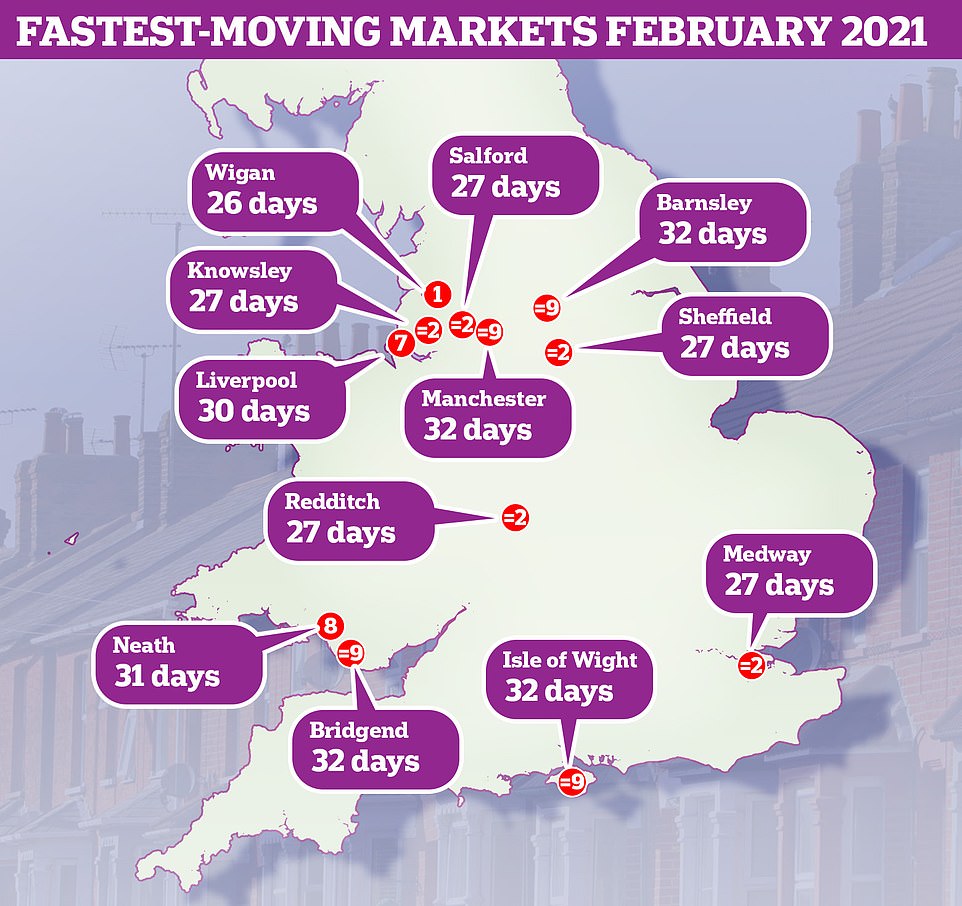 The quickest place to sell a property revealed: Homes in Wigan are in hot demand, with homes typically selling in only 26 days

Also within commuting distance to Manchester is Salford, which ranked in joint second place with a time to sell of 27 days.

Redditch and Knowsley also typically take the same time to sell and are similarly located on the rural-urban fringe of Birmingham and Liverpool respectively. 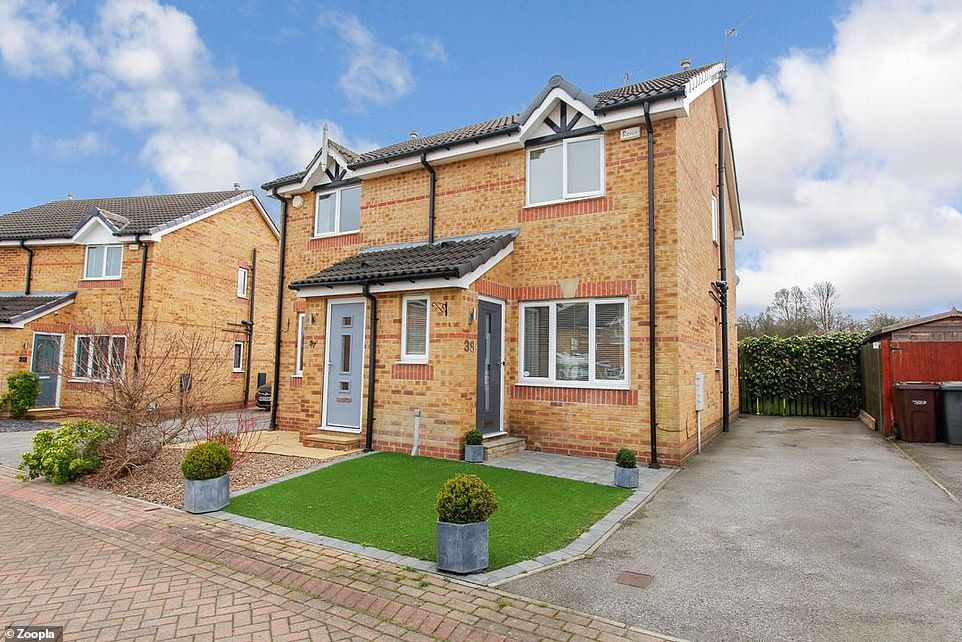 This two-bedroom semi-detached house in Rotherham, in Yorkshire and the Humber, is for sale for £150,000, via Strike estate agents

The fastest-moving property markets continue near Sheffield, with homes in Barnsley and Rotherham also featuring in the top 20.

Barnsley has an average time to sell of 32 days, while Rotherham has a slightly slower market with properties taking an average of 33 days to go under offer.

Despite this, the traditionally fast moving urban markets of Liverpool, Sheffield, and Manchester continue to also be speedy, with the average seller achieving an offer within 34 days.

It highlights how, while there is a race for space in the outskirts of cities amid the pandemic, there’s still increasing competition among buyers in city centres due to reduced supply.

The publication of the list of the top 20 fastest moving property markets follows the extension of the stamp duty holiday.

It will then taper off, applying to the first £250,000 until the end of September, before returning to £125,000 at the beginning of October.

Scotland was excluded from this analysis as the stamp duty holiday has not been extended there.

The good news for those hoping to clinch a deal before the end of the stamp duty holiday in September is that the fastest moving price band in 17 of the 20 markets is £250,000 or less.

It means both buyers and sellers in these markets have a good chance of completing their purchase before the end of the stamp duty holiday.

Reflecting the increased demand for properties by the sea, several coastal locations feature in the top 20.

Medway, in Kent, is the fastest moving coastal market in England and Wales with properties taking an average of 27 days to go under offer.

Other locations such as the Isle of Wight have seen dramatic improvements in the speed of their property market. Properties on the island are currently taking 32 days to sell, a staggering 29 days faster than the same time last year.

Two coastal areas in Wales also feature in the top 20, with the time to sell in Neath Port Talbot and Bridgend at 31 and 32 days respectively.

Both areas have a lot to offer home hunters, with easy access to the sea and countryside, and house prices sitting well below the average £226,400 price of a property in Britain today. 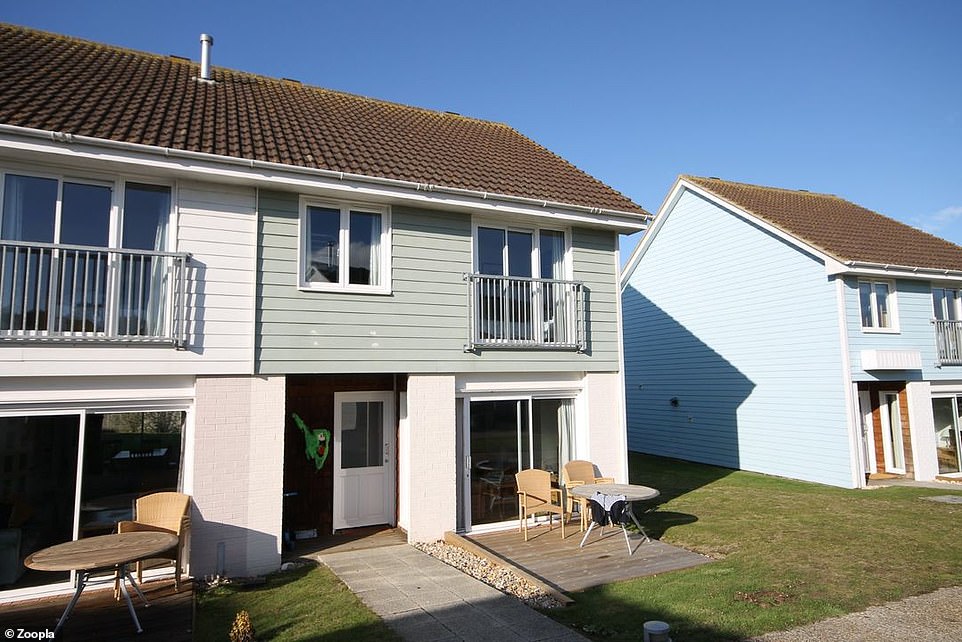 This three-bedroom semi-detached house in Yarmouth, on the Isle of Wight, is for sale for £125,000, via Spence Willard estate agents 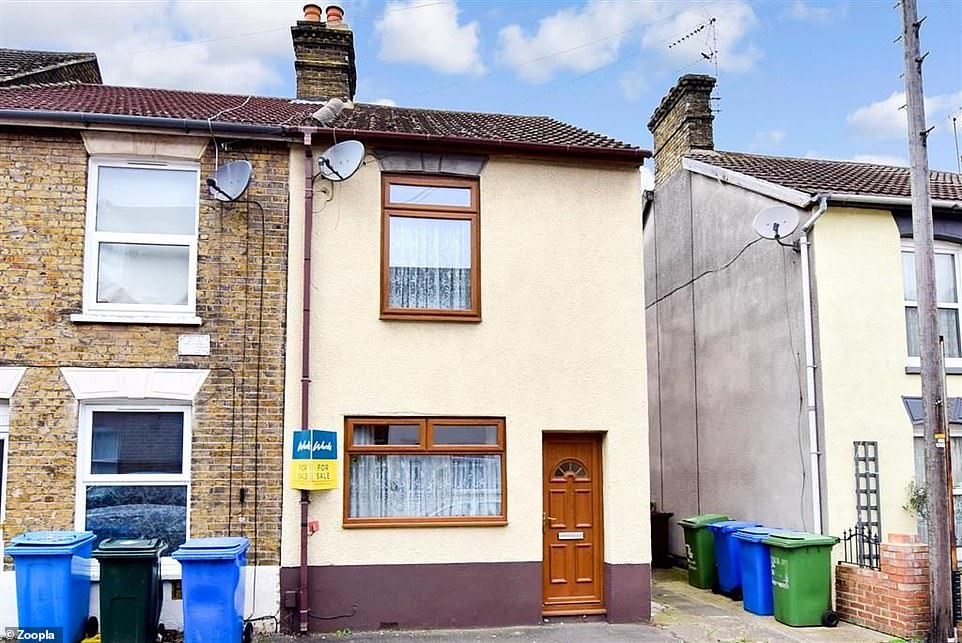 This two-bed semi-detached house in Sittingbourne, in Swale, is for sale for £149,000, via estate agents Homewise

The South East speeds up

There’s been a significant improvement in markets in parts of the South East of England with the time to sell dramatically reducing.

The scenic area of Swale, which encompasses part of the Kent Downs Area of Outstanding Natural Beauty, has seen its time to sell almost half, reduced from 66 days to 38 days.

The nearby historical city Canterbury has also seen a dramatic reduction in the time to sell, with the average property now going under offer after 48 days, down 25 days from the same time last year.

In London, Waltham Forest remains the capital’s fastest moving market, with properties taking 35 days from being listed to being sold subject to contract.

In line with London house prices, the fastest moving price band here is £400,000 to £450,000, noticeably higher than other parts of the country.

Zoopla suggested that Waltham Forest has grown in popularity in recent years, particularly among Londoners looking to get on the property ladder in a location with great transport links and without breaking the bank. 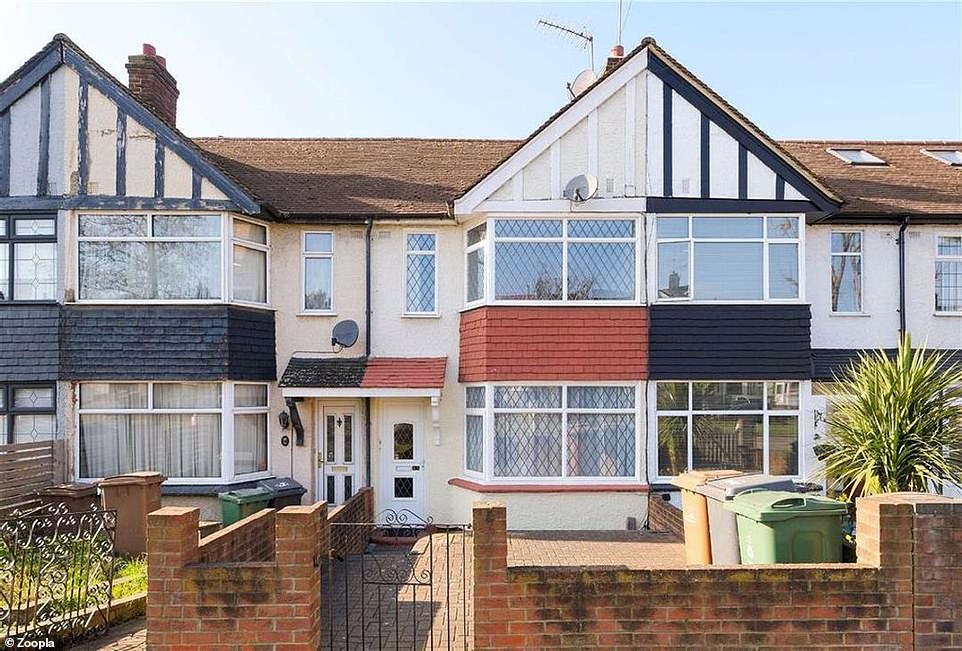 City centre locations: This two-bedroom house in Waltham Way, London, is for sale for £425,000 via estate agents Churchill Estates

Overall, the fastest moving property type In England and Wales remains three-bedroom, semi-detached houses, which takes the top spot in 13 out of the top 20 local authorities.

Gráinne Gilmore, of Zoopla, said: ‘We have observed the time taken to sell a home changing in many areas during Covid-19 pandemic. While the number of days it takes between listing a property to agreeing a sale in one of the traditionally fastest-moving moving markets such as Manchester, Liverpool or Sheffield has stayed the same, sellers in some adjacent areas may now see their properties selling just as quickly.

‘Buyers will have to move fast but the speed at which this stage of the buying process is moving also means that those looking to take advantage of the stamp duty holiday extension will be giving themselves the best chance of doing so.’

The analysis looked at the average number of days between the property being listed on Zoopla to offer – marked as Sold STC, with days on the market rounded to the nearest whole number.

Tables referring to the fastest moving markets are ranked on the median number of days until offer is achieved, while the market with largest improvement to time to sell is ranked on reduction in number of days from listing to offer (in days).

Real Housewife Arrested On Massive Fraud Charges – And Bravo May Have Caught It All On Camera!

Gogglebox: Who is the mum of the Siddiqui family and why doesn’t she appear on screen
World News