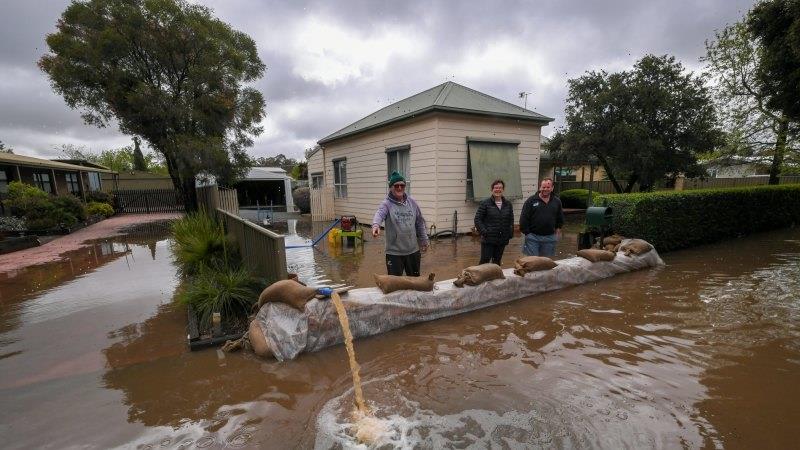 We need to plan before the floods and fires hit

The drenching of Victoria over the past few days has added to a year when the weather gods have rarely been restful. From Asia to Europe and Africa to North America, much of the world has been disrupted by record-breaking droughts, hurricanes, heatwaves, wildfires and floods.

It has caused enormous loss of life and economic damage. Emergency Management Minister Murray Watt is right to declare that Australia must have a national discussion about reducing risks to lives and property from increasingly frequent and severe natural disasters.

In March and June this year, the deluge in the Northern Rivers and western Sydney damaged more than 14,000 properties and destroyed 5303 houses. Nine lives were lost. The floods caused $500 million of agricultural losses and $2.7 billion of damage to infrastructure.

Queensland’s damage bill also exceeded more than $2 billion. With several towns in regional Victoria underwater, and extensive flooding along the Maribyrnong River in Melbourne’s west, it will be some time before the full cost is calculated of this week’s weather let alone the wet summer ahead.

At some point, we are going to have to accept that just cleaning up and rebuilding after each disaster, whether it be floods or fire, is only setting the nation up for more tragedy down the track.

Watt has floated the idea of more voluntary, and potentially even compulsory, property buybacks in certain flood-prone areas. In August, an independent flood recovery report for the NSW town of Lismore recommended a voluntary buyback program for the thousands of residents who lost homes this year.

But how expansive such a scheme can be needs to be weighed. There are at least 1 million homes across Australia that are within 100 metres of bushland, leaving them extremely vulnerable to the growing possibility of bushfires.

For many years, the consequences of our climate changing from excessive greenhouse gases was spoken about in theoretical terms. Even as extreme weather began to occur more often, scientists struggled to link individual events to the broader issue of a warming climate. That is no longer the case.

He went on to say that “In those places where the average rainfall goes down, the expectation is that intensity of rainfall will still go up”. That is precisely what we are seeing, with all its destructive consequences.

And the fallout is not just of the immediate damage that occurs. The two authors of the Natural Disaster Insurance Review in 2011 that led to a $10 billion taxpayer-backed underwriting scheme in northern Australia, John Trowbridge and John Berrill, said earlier this year there’s a risk of insurance “market failure” across the country due to soaring premiums for homeowners and costs for insurers.

They are rightly advocating for the federal government to create a publicly funded national insurance scheme to keep premiums affordable. It is not a hidden problem. Watt said this week insurance was becoming “unaffordable or unavailable” in disaster-prone regions across the country.

Since the Albanese government came into office this year, there has been a remarkable shift in the discussion on climate change. Many of the roadblocks to mobilising government and private enterprise to rapidly expand the rollout of more renewable energy have fallen away. After almost a decade of stagnation, it has been a welcome change.

But no matter how fast Australia, or the world, lowers the rate of carbon emissions, the consequences of having spent many decades burning enormous amounts of fossil fuels are well and truly with us. The growing number of extreme weather events occurring across the globe is not a switch that can be turned off.

Governments do have options. They must slow development in areas prone to natural disasters and ensure that building standards are equal to the task of protecting people’s homes that already exist in vulnerable areas.

Consumers also need access to affordable insurance meaning governments may need to intervene in cases of market failure (as has occurred with other insurance products).

Further disasters are going to happen. At the moment, while essential, too much of what we do is reactive.

Pouring more money into emergency services is never going to get a politician in trouble. It’s time to take a broader view on what to do before the storm or fire hits.

Michael Bachelard sends an exclusive newsletter to subscribers each week. Sign up to receive his Note from the Editor.