Home » Lifestyle » Watch: Woman who went missing 44 years ago is reunited on Late Late with man who found her 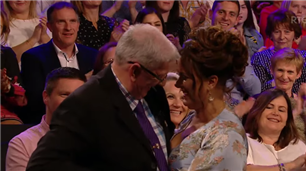 Watch: Woman who went missing 44 years ago is reunited on Late Late with man who found her

Collette Ryan, a woman who caused panic as a two-year-old after she went missing from Butlin’s Holiday Camp, has been reunited with the man who “changed her life”.

Collette, who disappeared after her mother let go of her hand to take a photo, was missing for 19 hours, leading to a major search around the camp in Mosney Co Meath, 44 years ago.

After reaching out to her saviour on Facebook, she was reunited live on The Late Late Show on Friday night, where she thanked him for the life she has gone on to live.

“It’s amazing,” she said through tears.

“I actually feel like we know each other because we have been speaking on the phone but it’s just amazing to meet the man who changed my life.

“We’ve seen each other on Facebook but it’s so nice to meet in person. I have so much to thank him for.  I have a two and a half year old granddaughter, I’ve my son and without this man I’d have none of that.”

Luckily, Collette was found by Martin Rowe, then 22, who saw her beloved red ball in the high grass next to a nearby railway track.

Also speaking on the show, Martin who spent 25 years in the army, explained how his inability to take a honeymoon after his wedding led to his fortunate presence in Mosney at the time of Collette’s disappearance.

“I was on an educational course through the army for two years. When I signed up for that course it meant that I got no leave for the two years.

“Myself and Liz, my wife, decided to get married and I looked for leave but they wouldn’t give me any. There were troubles in the North so I got married on the Saturday and I had to be back in uniform on the Monday.

“In 1975, on our first holiday together, we went to Butlins Mosney. This girl had been missing for 19 hours but I had heard nothing the night before because I was involved in a talent contest in Mosney.

“The following morning I went to breakfast and they announced that a little girl was missing and they were looking for volunteers to go out and look. We went out the back entrance of Mosney and on the way out I saw the wire where she got out.

Martin, whose reunification with Collette caused her brother Michael to tear up on the show, described how he found her some five miles away, down a steep embankment next to the track.

“I went down the back gate and walked along the high grass. There was a wall that divided Mosney and the railway track, and on the way along I saw a break in the wall. People said ‘ah God she wouldn’t go down there. I said to myself, ‘I’m going to go down’,” he said.

“When I went down, I saw Collette asleep clinging to the red ball with her head on the red ball. I was an army medic so the first thing I did was I checked her pulse.

“When I checked her pulse, she woke up. Usually if a child wakes up and sees somebody around they start crying. No crying. ‘Don’t take my red ball’.”

Collette was returned to Mosney where her mother had been sedated in the sick bay because of her stress. After a cheer broke out in the camp, her mother described having to tell everyone to shut up so she could hear that Collette was found alive and well.

Other than a very dirty nappy, Collette was unharmed and even managed to hold on to her red ball.