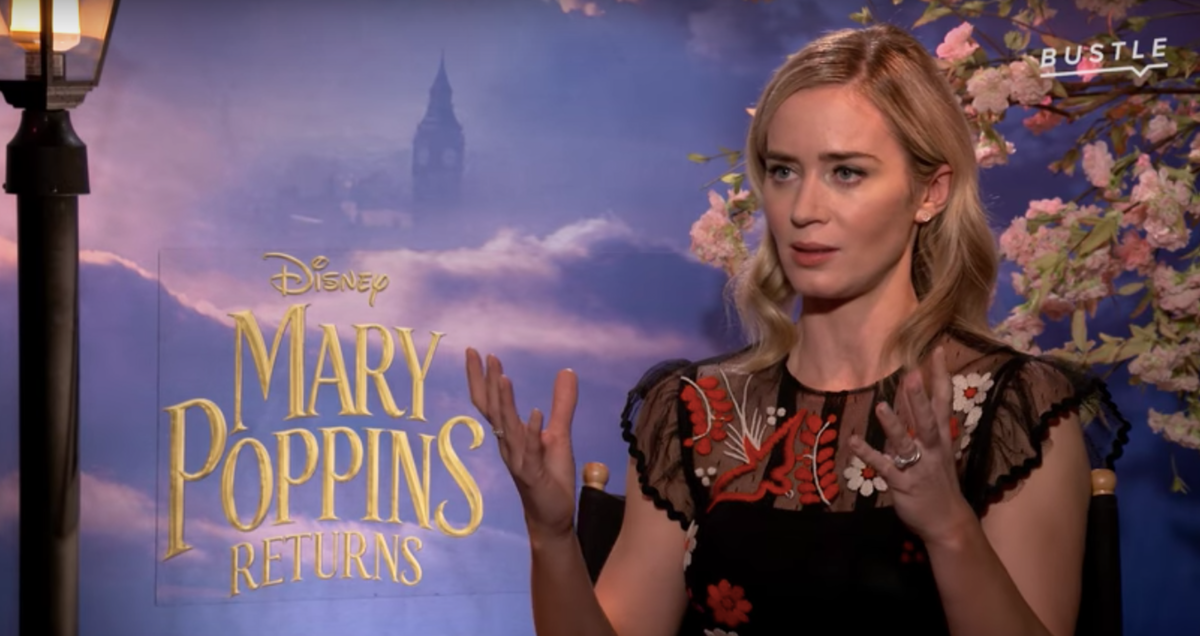 There’s a reason why Mary Poppins is said (by herself) to be “practically perfect in every way.” The beloved heroine always has an unwavering self-confidence that assures everyone that no matter how difficult the task is, she’s the perfect person to tackle it. Mary Poppins’ confident attitude remains unchanged in the sequel Mary Poppins Returns, out Dec. 19, showing how years later, the Banks siblings still need some of her magic to make their lives better.

During the film’s New York City press junket, Bustle Movies Editor Sage Young chatted with Mary Poppins Returns’ star Emily Blunt about Mary Poppins’ legacy and how her confidence is such a large part of why fans still love the character. In the new movie, the magical nanny, originally played by Julie Andrews, returns to Cherry Tree Lane to help the grown-up Banks children (Emily Mortimer and Ben Whishaw).

Mary Poppins is admirable to those who grew up watching the film in her determination and way of asserting her needs, which is a trait that Blunt admires deeply as well. And she hasn’t changed at all, in that respect.

“I love that about her, that she’s a woman who can get things done and there is this quite funny sort of imperious quality to her, that certainly really made me laugh in the books,” explains Blunt. She also notes that the iconic character’s flaws also are her strengths. “She is incredibly rude in some ways, yet very vain, and rather baffled by people’s weaknesses. She’s wonderfully sure-handed. The way she swoops in with confidence, a sense of practical nature, and a sense of the fantastical, and makes everything right again, I think is so comforting for children. They feel they’re in safe hands with her.”

In many ways, Mary’s ability to handle any challenge thrown at her is what makes her the ideal nanny. When she first enters the Banks children’s lives in the 1964 film, one of the most valuable things she teaches them is how to adopt a can-do attitude and become confident in their abilities to handle tough situations on their own.

In this sequel, Mary Poppins once again reminds the Banks family the importance of maintaining that confident attitude, as Michael struggles with becoming a widower and trying to be the best father to his three children, Annabel, John, and Georgie. But to Blunt, it’s important for viewers to tap into that magical, inner Mary Poppins self-confidence, too.

“I would want everybody’s life to be viewed with a sense of self-confidence,” notes the actor. “I think it’s a very valuable thing and I want it for my own children. For them not to be concerned with fitting in or being normal. ‘Normal,’ who wants that? And she is extraordinary, and she is different. And her differences are what makes her extraordinary. I think that’s why she’s a very positive figure for people.”

Mary Poppins is a timeless character because she helps others tap into their full potential. If you grew up watching the original Mary Poppins film, chances are you dreamt of having a nanny like her, who could solve everything with just a snap of her fingers. Though the character’s confidence comes with a pinch of magic, she makes you believe that anyone can put her philosophy into practice.