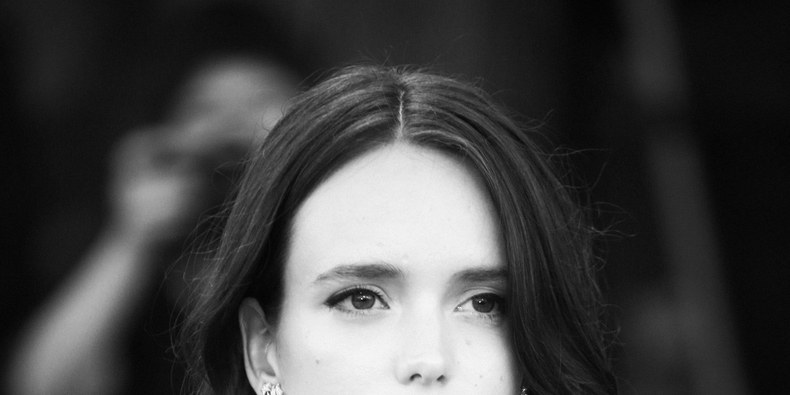 Stacy Martin has a confession to make. “I love a bit of pop music,” she confirms over the phone. “I’m a big sucker for it.”

The 27-year-old French and British actress is calling in from Hamburg, Germany, where she’s already filming her next film, just as her latest, Vox Lux—a film about, yes, pop music—is about to hit theaters. But Vox Lux is more than a film about pop music (in which Natalie Portman plays a Kanye West-esque mega-star, no less) and Martin has plenty to share.

The movie, out Friday, follows the lives of sisters Celeste and Eleanor (Martin) following the aftermath of a school shooting that leads Celeste to unexpected and eventual pop stardom. The film is broken into two parts: before, with Eleanor and Celeste (played as a teen by Raffey Cassidy, and later by Portman) as teens navigating new territories, and after, as adults, when Celeste has reached the pop culture apex. While Cassidy transitions to play Eleanor’s own daughter in the second act, Martin portrays Eleanor at both stages of her life.

“We basically meet her when her life has changed, and that was one thing that I really focused on,” Martin said of portraying the character as she grows. “She decided when she was really young to dedicate her whole life to her sister—to keeping her alive, to keeping her happy, and to making sure she’ll never be alone again. In the first part, there is a struggle between her wanting to be a teenager and this decision that she’s made to herself and to her sister. In the second part, she lives with that decision a lot more when she’s grown up and things have settled, even though they’ve changed and life has taken on something a bit bigger than they expected.”

Ironically, given the very convincing nature of her performance, Martin herself is an only child. “I have a lot of cousins, but no siblings. I read a lot, and also just looked around me. I have a lot of friends who have siblings. Just seeing how they react to anger or love, it seems like they are so intertwined with one another. It's a relationship that you can never change regardless of what’s going on. That helped me a lot; regardless of what’s happening or what you are feeling, that person will always be your sibling. There’s an attachment and there’s a love there that will always [connect] you.”

Vox Lux marks Martin’s second project with director Brady Corbet, following 2015’s The Childhood of a Leader. “I got a very early draft quite quickly after he finishing writing it, maybe a year ago,” Martin said of the script, adding, “It’s almost a satire and there’s a lot of irony in it, but at the same time, it’s a real portrait and you really feel for all the characters. You understand all of them, and at the same time, they’re all monsters. Seeing how they all evolve and the fine line between what makes someone a good or bad person can be so fascinating to watch.”

The film made its debut at the 75th Venice International Film Festival in September, just 7 months after filming, to rave reviews and awards season buzz for the actors, despite some pre-premiere jitters from the crew. “We were very nervous,” said Martin. “I definitely was very nervous. So much has been put into this film, and it’s not a conventional film in any way. I think it surprised a lot of people, and a lot of people thought about it and reacted and really enjoyed it. When the screening ended, it was a huge wave of relief just seeing what we wanted to do was received in the way that we wanted. It was actually quite humbling. I normally don’t get quite emotional at screenings.”

There are, however, plenty of emotions laid bare on screen, particularly in the film’s scenes between Portman and Martin. “They were really hard scenes,” noted Martin. “They were extremely long, but Natalie and Brady understood what they wanted to do. Natalie is a phenomenal actress and she gave so much and was so brave. I think because we shot the first part of the film before she arrived, it helped because we knew what the film and what the world was. When Natalie arrived, she just became this sort of lovable monster. It was kind of amazing. We had talked about it and imagined it, and then she arrived, and there’s something extremely sharp and messy about her performance that we were quite amazed by. You can only just respond to that.”

Of course, much has been made about Portman’s pop star makeover, which sees her performing Sia-penned songs while decked out in Gaga-esque costumes. And while Martin herself may not have gotten to live out any pop dreams, she certainly reaped the benefits. “They basically put on a big concert [for the final arena performance],” she said. “Natalie performed all of the songs—obviously it wasn’t a live show, but it felt like one. Her husband Benjamin Millepied choreographed it, and it was kind of incredible. Suddenly, all of the themes and subjects in the film about pop culture and stardom, they are all there in that end sequence… I was only in for it for half a day, but I was dancing. Really, I had a great time. I even remember the choreography a bit. It’s quite embarrassing.