Over the past three decades, the fashion fixture has created one-of-a-kind bridal styles for the likes of Victoria Beckham, Hailey Bieber, Kim Kardashian and Alicia Keys — and it all began with a Kennedy.

“I remember the dress was heavenly. And I remember that after all the work we put into it, within 10 minutes of the ceremony, Victoria and Max were playing football. Typical of the Kennedys — very sporty — she was out in that extraordinary dress we worked on for six months, getting grass stains!”

In the years since, Wang’s not only become the go-to for A-listers in need of a big-day dress, but also expanded her brand to include fragrance, jewelry, home goods — and most recently, a wedding stationery collection for The Knot, comprised of 14 coordinating wedding invitation and paper suites in styles ranging from vintage to modern. 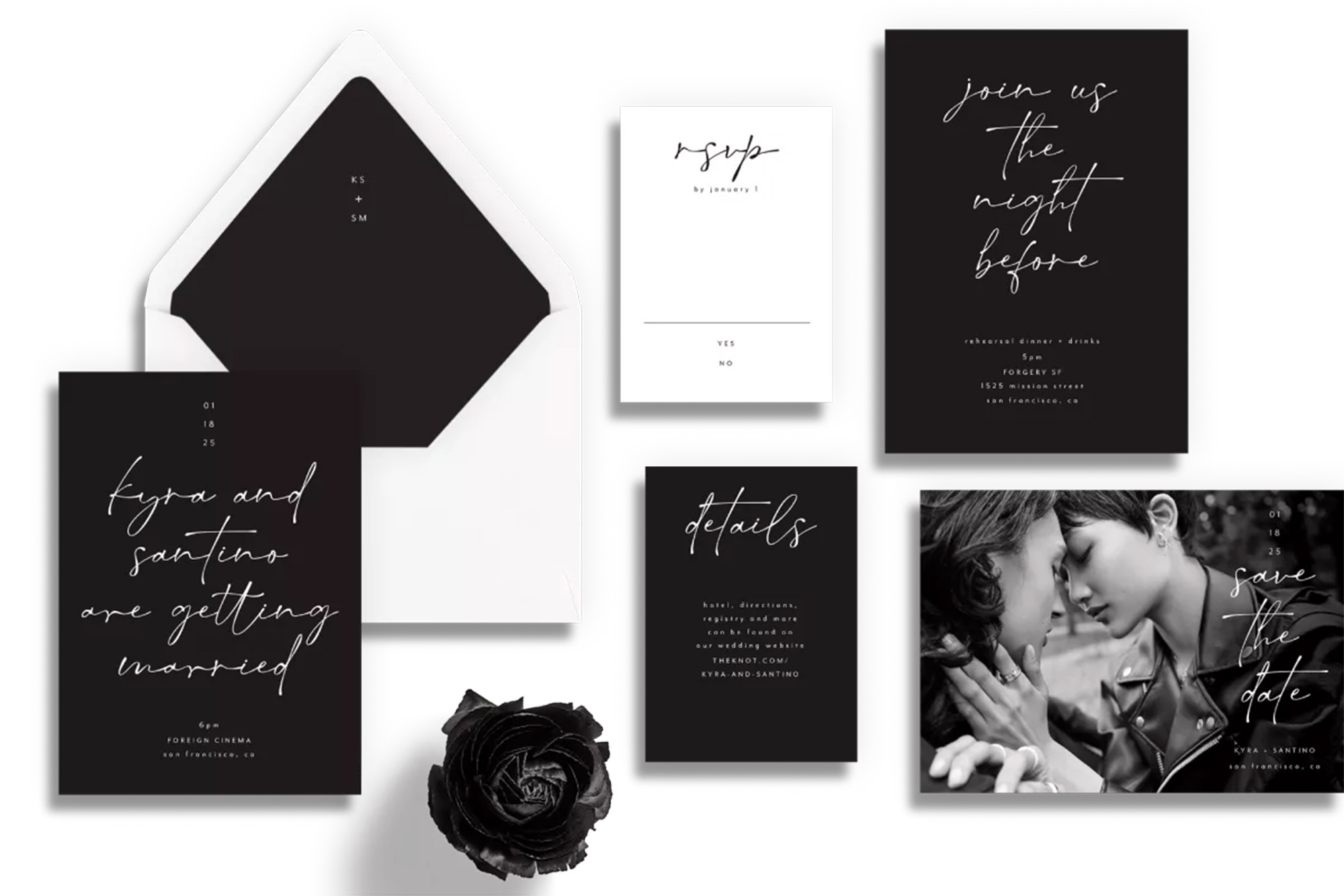 “When it comes to invitations, it’s the first time that a couple is making a public joint statement about not only their feelings for each other, but their taste, their style, their creativity and a peek into how they intend to celebrate,” the designer says.

“It sets the tone — and the time of year, the kind of wedding, all of these things are encapsulated in the invitation. And I just think it’s such a creative, fun project for a couple.”

It’s also the ideal warm-up for selecting the perfect wedding dress, a process Wang knows well. But believe it or not, the New York native —who spent nearly two decades as a Vogue editor before launching her label — didn’t have a background in bridal attire. 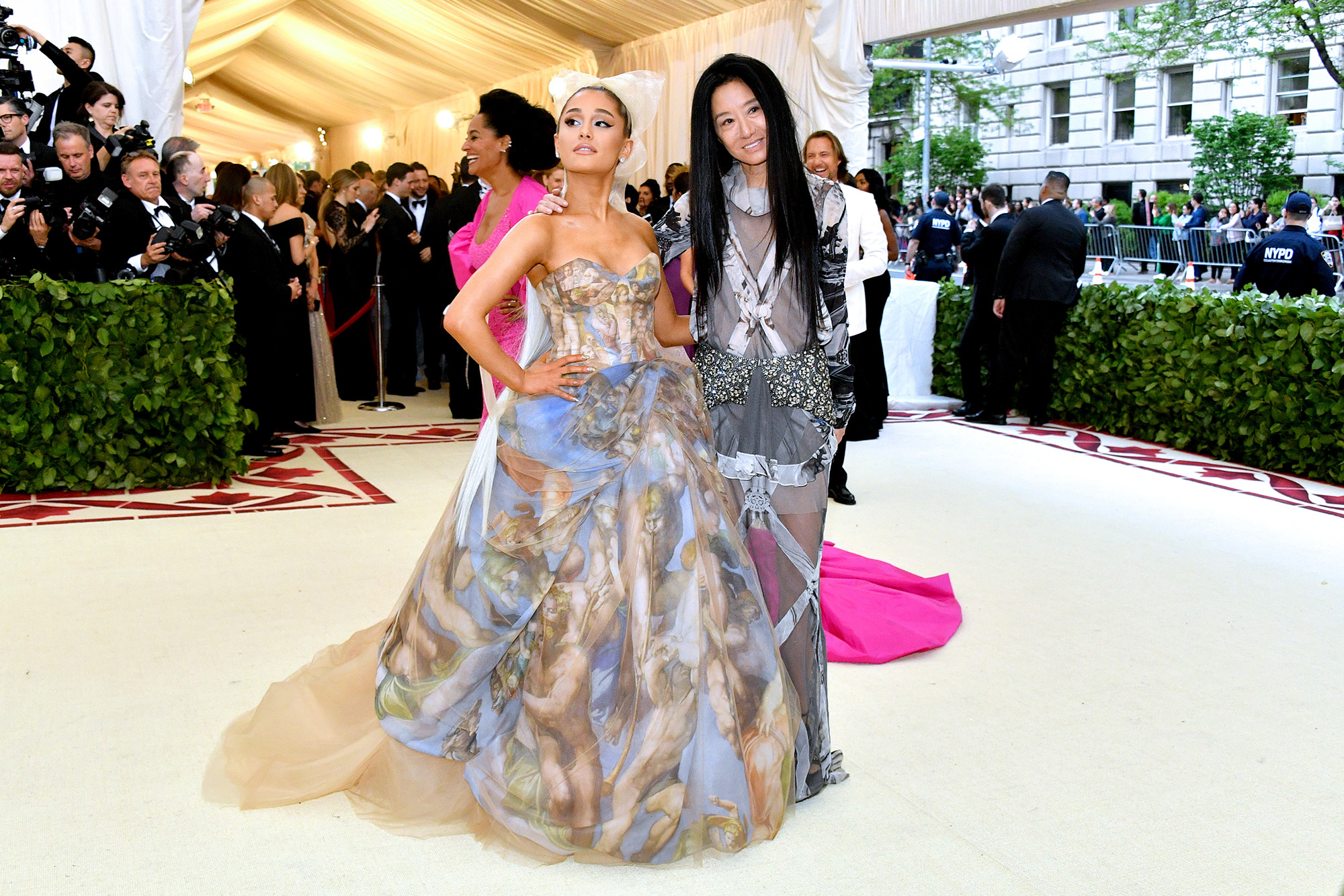 “It really wasn’t until I got engaged at the ripe old age of 39 that I realized there was very little out there,” she recalls.

Below, Wang looks back at three of her most iconic wedding creations for Gwen Stefani, Ariana Grande and Mariah Carey. 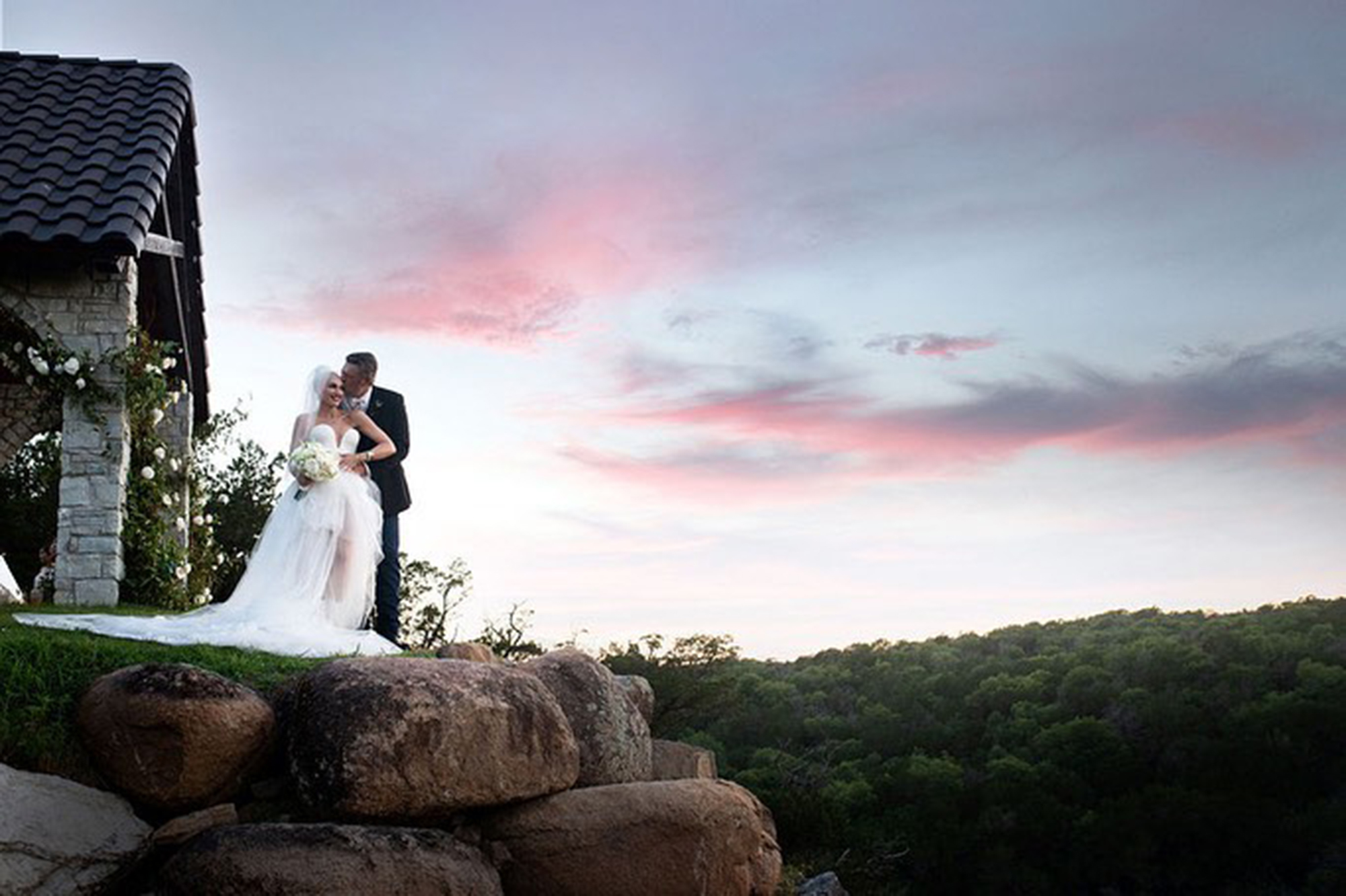 “Gwen knows clothes. Many performers at that level, they’re very savvy about how they look best — most women are, but when your livelihood is about performance, it’s even more [so]. I happen to know Gwen, and I knew a lot about the wedding in terms of how they were going to celebrate.

She took some inspiration from one of the collections I did, but on the other hand, [this gown] had so much of Gwen’s personality. There was this kind of charm and this kind of cool and a little bit of a Western vibe, and was just is perfect for them. 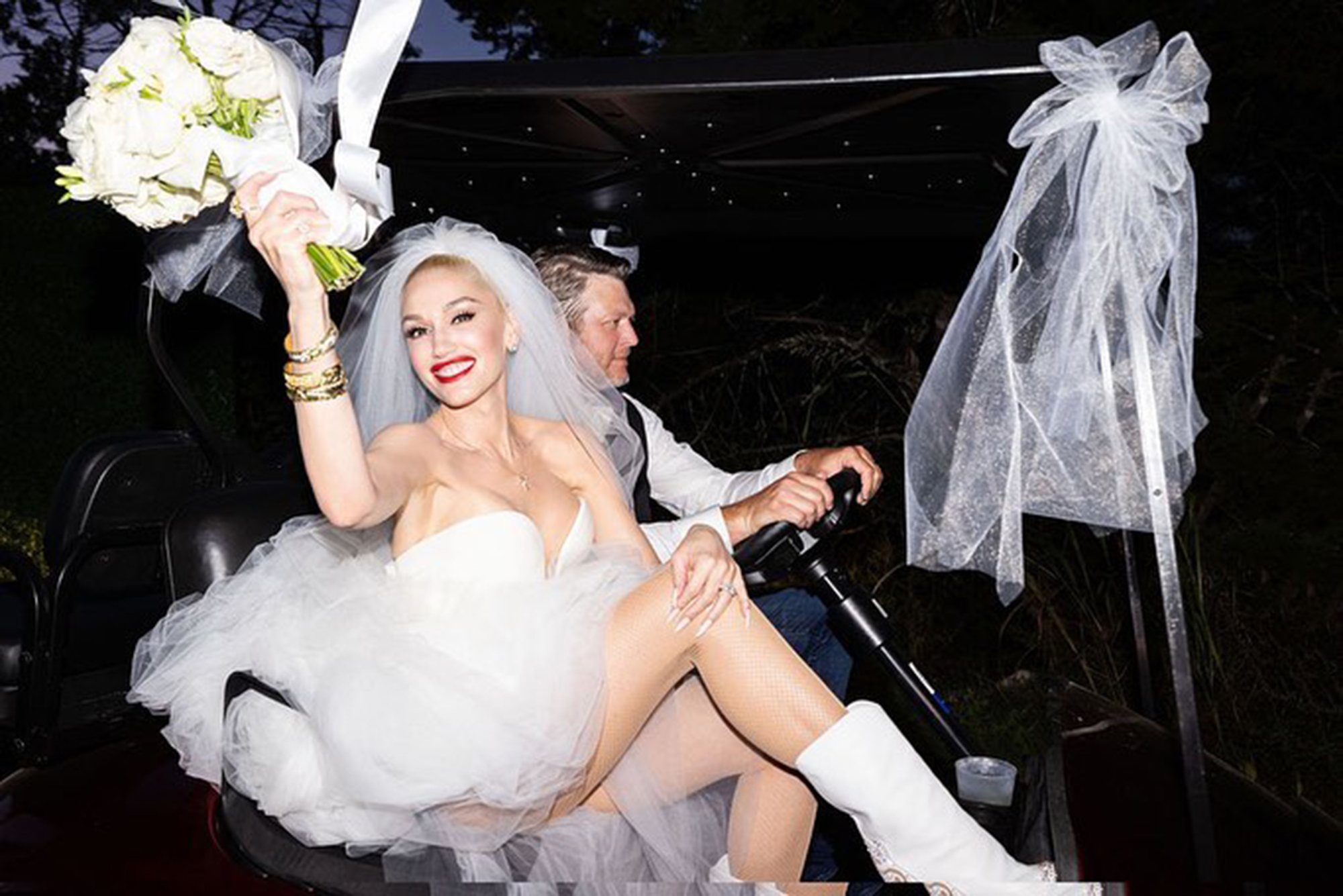 And then she switched over to the mini version for the party — and with cowboy boots! The exuberance and joy and happiness of this couple was infectious. And that always affects the collaboration, whether you’re doing someone for the Oscars or for their wedding. It’s very much what you take into consideration as a designer when you’re collaborating.” 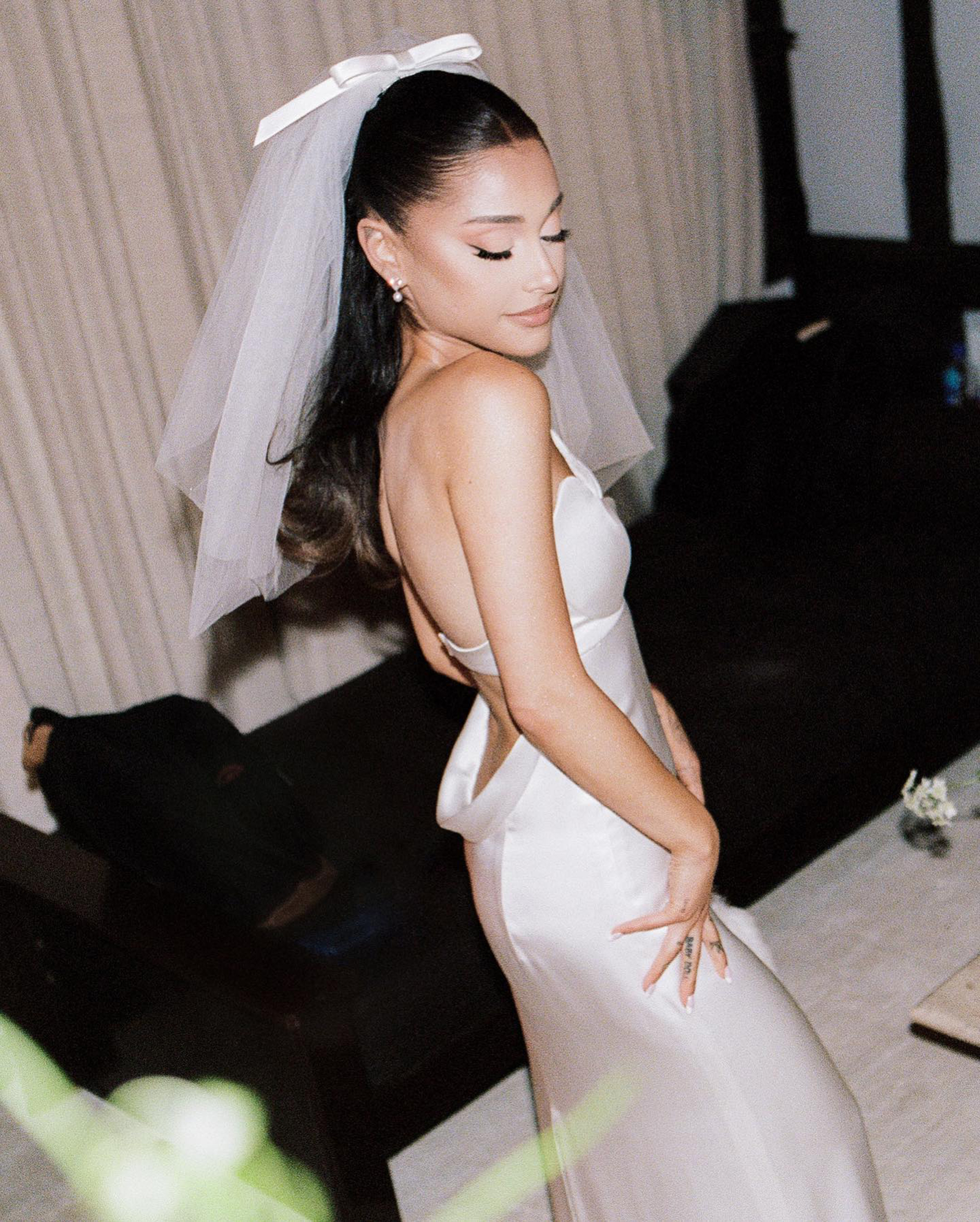 “She really went against type; she didn’t want to wear anything that had more volume, and wanted something extremely body [-conscious] and lithe. It’s more of a ’30s kind of vibe; it’s narrow, it’s bias [-cut], and I think there’s a certain grace and sensuality to that kind of shape.

I loved all the accessories as well — the bow, the veil. They were very, very Ariana; the youth, the charm.” 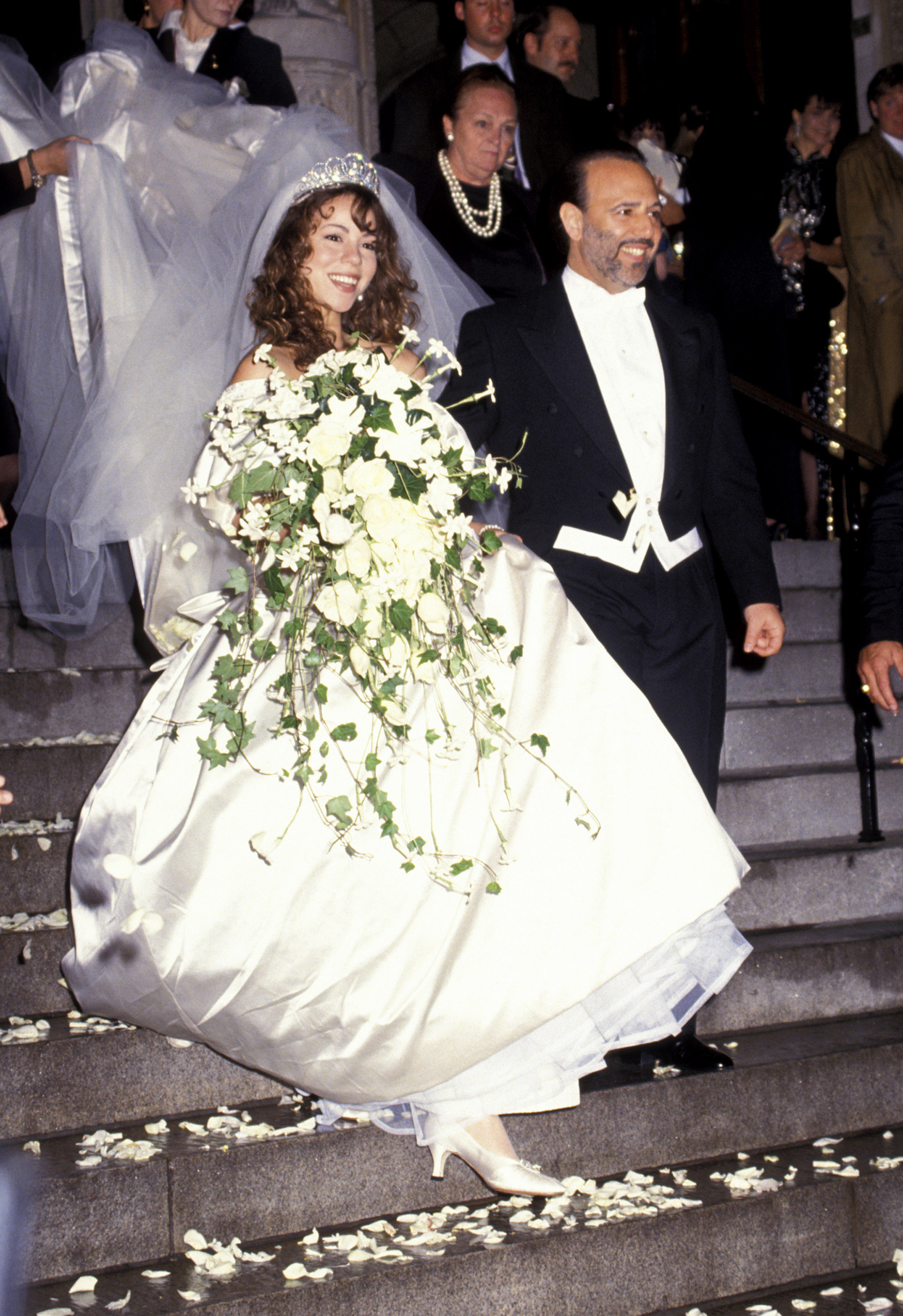 “This was the era of Princess Diana, and she was very moved and influenced by that wedding. I also knew Mariah and I knew her husband at the time, Tommy Mottola, and they wanted to really celebrate and [go] all out.

I think the train was something like 22 feet; it was very much like Diana at Westminster Abbey. She wanted that level of pomp and circumstance and romance and volume. She really wanted a princess look, and it was just one of those weddings that was truly a fairytale in the sense of scale — and I don’t mean just the dress, but the celebration, the dinner afterwards and everything else. It was rock ‘n’ roll … or rock ‘n’ royalty.”