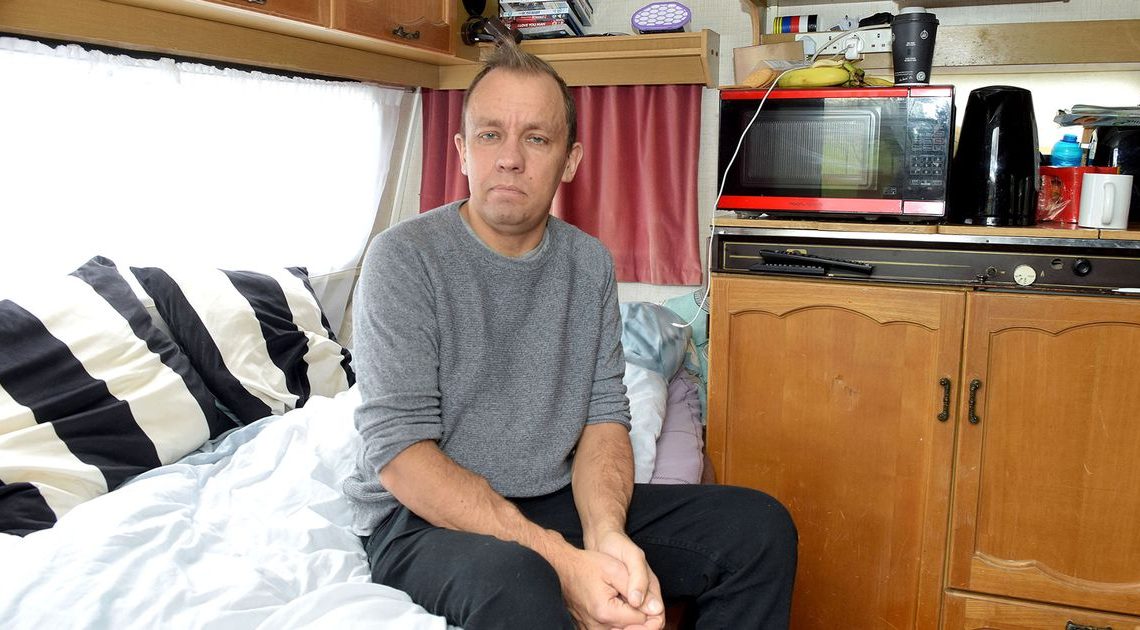 A desperately ill dad-of-two claims he was forced to leave his home and move into a caravan because he had to wait one month for his Universal Credit to come through.

Martin Weaver, 42, has a hereditary kidney condition and was forced to leave his job in June 2018 after he suffered a heart attack due to the strain caused by dialysis.

The divorced former hotel manager, from Stoke-on-Trent, is now in urgent need of a kidney transplant and claims he has even considered suicide.

After applying for Universal Credit in July 2018, he claims it took 28 days for him to receive the payment, forcing him to leave his one-bedroom flat because he could no longer afford the rent.

He said he is now living in a freezing 34-year-old caravan worth £50 on a campsite in Yorkshire without a cooker or toilet and can only afford to eat tinned food, frequently skipping meals.

He said: “It’s embarrassing living like this, it’s degrading. I feel like I’m not worth anything to anyone.

“It’s not a nice way to live. My kids think it’s great living in a caravan and look at it as an adventure but at this time of year it’s just too cold.

“I can cook for them but there’s no bathroom. I can’t afford to eat properly which means that my health has suffered.

“I’ve worked hard my entire life, I didn’t ask to be in this situation and I just feel utterly abandoned.

“It’s been so bad that I phoned Samaritans to say I couldn’t carry on. I was having suicidal thoughts.”

Martin, who has suffered from polycystic kidney disease his whole life, was always able to manage his condition and enjoyed a successful career as a manager in the hotel industry.

But after he suffered a heart attack in June last year he now requires four hours of dialysis three times a week after the illness escalated.

Despite the treatment, Martin’s kidneys are only four per cent functional and because of the strain put on his heart by the dialysis, he urgently needs heart surgery before he can have a kidney transplant.

Martin first applied for Universal Credit in July but claims he received his first payment in the middle of August.

He receives £676 in Universal Credit a month but the rent on his former one bedroom flat cost him £540, which left him with £136 for all other outgoings.

Due to allegedly having to wait a month for the first payment, he soon began to skip meals and fall behind on his rent – eventually giving up his flat and moving into the caravan in October last year.

Martin said: “I was behind on my bills and rent and you have to make choices when you’re on Universal Credit between eating, heating and anything else.

Martin was given the caravan after putting an appeal out on social media and has since spent the last four months moving from £12 a night caravan sites where his electricity is included in the fee and he can use the on-site showers and toilets.

When he has no spare cash, he said he has no choice but to park in a roadside lay-by.

But despite the cost-cutting measures, Martin was still forced to take out a payday loan and is dependent on getting food from foodbanks as well as borrowing money from friends.

Divorced dad-of-two Martin said: “The caravan has no toilet and doesn’t have a proper oven.

“I have to keep warm using a fan heater and blankets. The oven doesn’t work so I have to use a table top cooker.

“If my kids come and visit then I can cook for them but there’s no bathroom so I try to see them when I’m at a caravan site.

The Mirror are demanding a halt to the expansion of Universal Credit and for a review to take place.

We say there are three options:

Sign our petition to stop the rollout of Universal Credit across Britain and to replace it with a fairer system by signing our petition.

“The caravan has no shower. If I’m on a site I use theirs. If not, then I use baby wipes or try and find a service station with a shower.

“It’s a very stringent lifestyle. My health has suffered.

“One of the things needed to maintain a healthy life is a healthy diet and that’s impossible on Universal Credit when you need to decide on whether to eat well or to keep warm. I can’t afford both.

“When I told my dietitian that I was only able to eat tinned food she was very upset.

“Often I have no choice but to go to the foodbank. It’s not the food I’m supposed to eat but it’s a case of being able to eat something.”

Martin is now trying to fundraise for an improved caravan on GoFundMe.

He added: “There are people who don’t want to work and who abuse the system so I understand there needs to be things in place to get people to work.

“But the people in dire need who have problems worse than myself are being let down the system.

What is Universal Credit?

It was launched in 2013 as the pet project of Tory Iain Duncan Smith supposedly to make work pay.

Low earners, those out of work and the sick or disabled. Already 610,000 people are on UC – 8% of benefit claimants.

It is being rolled out to individual Jobcentres including 52 in October 2017.

What are the problems?

Debt-ridden claimants must wait six weeks (five from early 2018) for their first payment, with 19% waiting longer than that and 4% waiting ten weeks in late 2017.

That is because payments taper away at 63p for every £1 claimants earn.

The timetable has also been put back nine times since 2013 after a string of glitches and will only be fully complete in late 2022.

“If someone makes a mistake then your money just stops. There’s no conversation. How can people think this is acceptable?

“I’d love to go back to work but I can’t at the moment until my health improves.

“I don’t want a luxury apartment but it would be nice to have somewhere with a proper toilet and shower.

“In this day and age is that really too much to ask?”

A spokesperson for the Department for Work and Pensions (DWP) said: “Universal Credit provides a safety net for those who need it and is designed to help people off benefits and into work, because work is the best route out of poverty and the best way to improve your life chances.

"Anyone struggling with housing costs can also apply for Discretionary Housing Payments.”

If you need to speak to someone, Samaritans are available 24/7 by calling 116 123 or by emailing [email protected]

'Blue Bloods': Who Is the Highest-Paid Actor on the Show?
World News