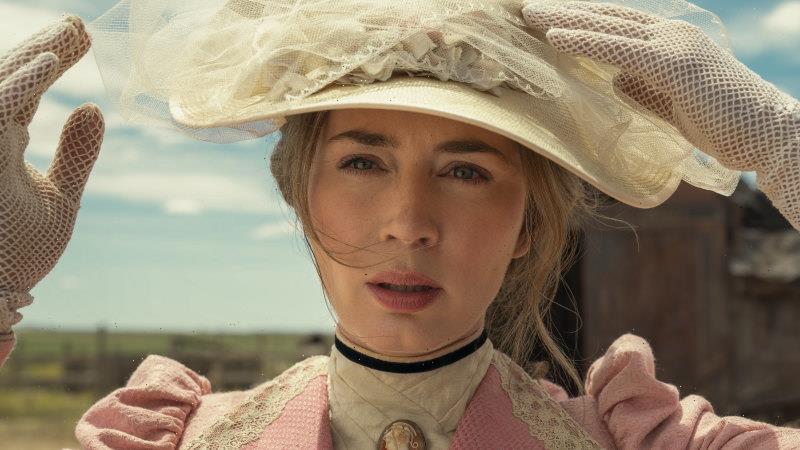 TV western’s unrelenting savagery will push you to the limit

How much is too much? That’s a question this gory, grandiose limited series repeatedly asks, both of the viewer and itself. Set in 1890, with extended flashbacks to 1875 to establish a knotty plot, this western piles on violent deaths, loquacious face-offs, historic crimes, and unrelenting savagery. It keeps introducing secondary characters, if only because so many get murdered post-monologue. “Burn and starve wins every time,” boasts a robber baron, dispensing reductive frontier logic, but the show itself is nothing if not excessive.

With long establishing scenes that twist your expectations, it partners two very different outsiders: Cornelia Locke (Emily Blunt) is a corseted English member of the aristocracy, arrived in newly formed Oklahoma to kill the man she blames for a child’s death, while Eli Whipp (Chaske Spencer) is a Native American of the Pawnee tribe mustered out after many years of armed service in the US Army. She doesn’t understand the unwritten rules of the prairie, while he refuses to accept them. 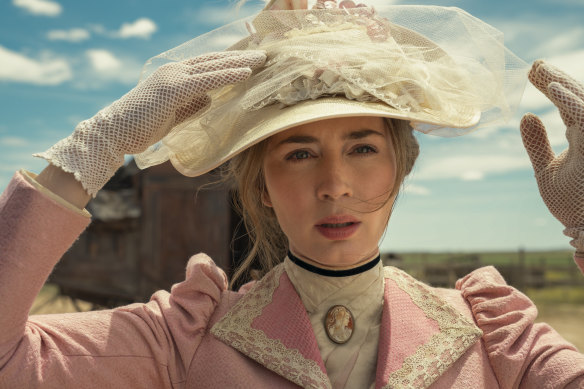 Emily Blunt as Cornelia Locke in The English.Credit:Prime Video

Just like the 1960s spaghetti westerns, The English uses Spanish locations to effectively double for America’s interior. Likewise, British writer and director Hugo Blick offers an outsider’s take on the genre. His gaze is maximal: vast landscape, grotesque villains, heart-stirring bonds, and incomprehensible massacres; there’s Tarantino talk and Cormac McCarthy bloodshed. The tone is pushed to the limit, and then beyond. I pined for an inoffensive cowhand or two, but instead got a homicidal matriarch with scalping scars.

Blick’s previous shows, 2014’s The Honourable Woman (Stan*) and 2018’s Black Earth Rising (Netflix), both focused on women tested by daunting circumstances. You can see why Blunt, one of Hollywood’s biggest stars, committed to Cornelia, and the role asks her to accommodate the story’s flourishes and the character’s evolution. Toting a gun and dreadful memories, Cornelia is hardly an innocent, although her humour is underused as a coping mechanism – when Eli says he prefers oral history, she points out that he barely speaks. 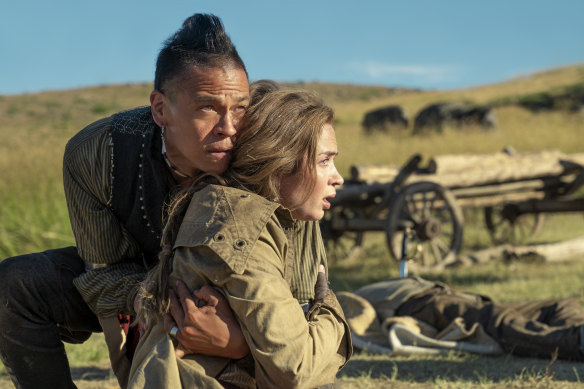 The show is trying to outdo all kinds of revisionist westerns, and sometimes it succeeds. Rafe Spall gives an amazingly pungent performance as a villain who infects everything he touches. But the price of this is an episodic structure in the middle episodes and a tendency for some of the supporting characters to be defined by a single exaggerated trait. In voiceover Cornelia muses on, “the difference between what we want and what we need,” but The English refuses to make that choice. It is gloriously obstinate from the start to its multiple endings.

A six-part British murder mystery, with interwoven storylines and a lingering sense of dread. It’s such a common commission that the description is almost boilerplate, but in this quietly gripping thriller it’s merely the outline for a story that reveals how the collective trauma of the past – specifically the devastating British miner’s strike of 1984 – can overwhelm the present day. The question of who did it takes on fresh meaning here.

Life in a Nottinghamshire village is shaken by the killing of a former coal miner, which reveals the long-time divisions between those who manned picket lines and those who crossed them. Families are divided not just by allegiances but lies that have enveloped the next generation. Creator James Graham (The Quiz) has crafted a procedural wracked with regret. The lead police detective, Ian St Clair (David Morrissey), is as haunted as any local. 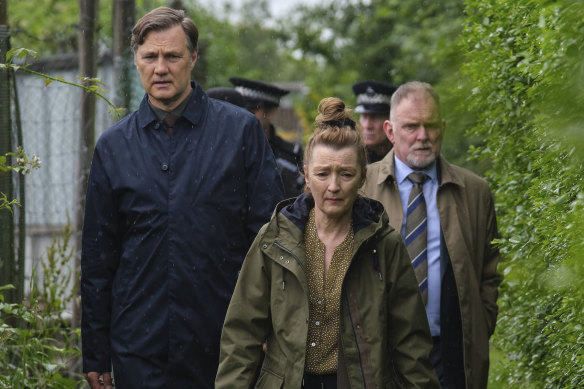 “What else is there to do around here but remember,” laments the victim’s widow, Julie Jackson (Lesley Manville). Even as the story escalates, via historic malfeasance and an unhinged fugitive, the clean, accomplished storytelling keeps making you look anew, with empathy and bitter understanding, at a history no one can forget. 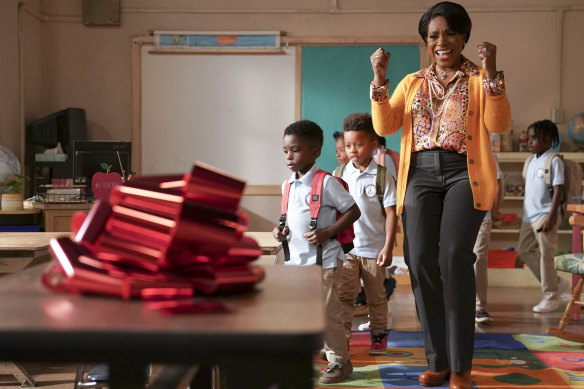 Sheryl Lee Ralph in season two of Abbott Elementary, the best new American sitcom of the past year.Credit:Gilles Mingasson/ABC

The best new American sitcom of the last 12 months hit the ground running in the second season, with creator and star Quinta Brunson deftly adding to the viewers’ understanding of the comic cross-section of teachers that keep the system going at a public primary school in West Philadelphia. Like The Office, it’s a workplace mockumentary, complete with quizzical reaction shots, but unlike the paper boys and girls at Dunder Mifflin this workplace matters and the antics possess a specific sense of place that enhances a cast of scene-stealers. 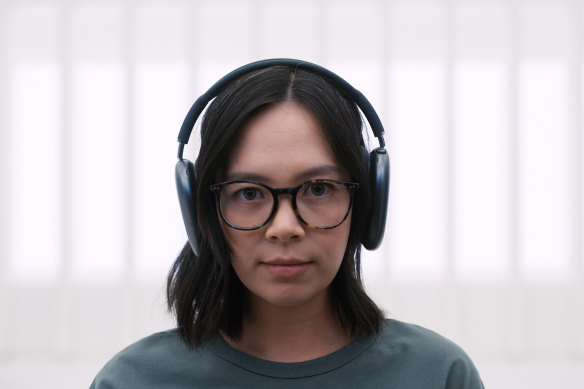 There are now several offices in play as the third season of this online gaming comedy opens, but with an assured opening to the new episodes – complete with a bittersweet kicker – the series bends but never breaks with its swift, sardonic take on creativity and professional companionship (take note of the number of pairs in the ensemble cast of characters). With shades of Silicon Valley, game designers Ian (co-creator Rob McElhenney) and Poppy (Charlotte Nicdao) are now talking to venture capitalists, but satisfaction is fickle on this show. 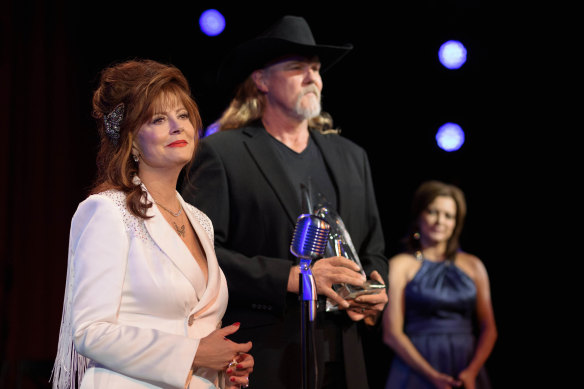 It’s an enticing pitch: a country music version of the hip-hop saga Empire. But the pedal steel guitars and petty plotting of this melodrama about “the first family” of Nashville mostly delivers a mish-mash of performances, starting with Susan Sarandon as the famous matriarch with Anna Friel and Beth Ditto as her ambitious daughters, and a mysterious death serving as yet another framing device. The show is trying so very hard, but unfortunately it mistakes petty rivalry and rote machinations for juicy viewing. 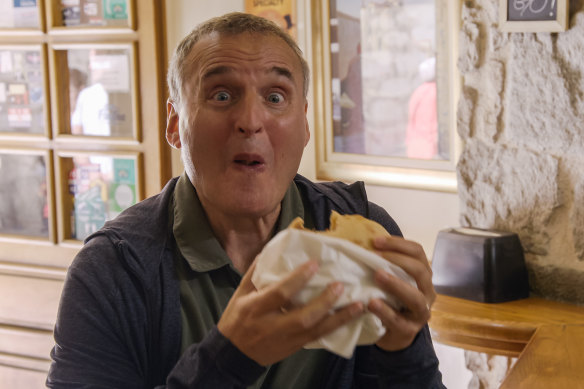 More Broadway than Bourdain, Hollywood sitcom creator Phil Rosenthal (Everybody Loves Raymond) continues to be the enthusiastic face (and stomach) of this enjoyable culinary travel documentary. “If you make a plate for me of your favourite things, I will eat them,” Rosenthal promises a baker in the Croatian city of Split, and he certainly delivers. Preferring vaudeville patter to gourmand grousing, he has an easy-going interest in regional cuisine and the communities that nourish them. This season finds Rosenthal in Santiago, Philadelphia, and Austin (oh the barbeque!), taking lovably large bites as he goes.

* Stan is owned by Nine, the owner of this masthead.

Death in Paradise star speaks out on Doctor Who role