At first blush it is an utterly disparate group. Andreas Malm is a Swedish professor and author. Jessica Reznicek drove a forklift at a grocery distribution centre in Iowa before she joined the Catholic Worker movement. Peter Kalmus is a scientist with NASA’s jet propulsion laboratory. Mali Cooper is the activist from Lismore who caused chaos this week by blocking the Sydney Harbour Tunnel.

What unites the group is their embrace a combative form of climate activism, a method of disruptive and potentially dangerous civil disobedience which looks set to grow worldwide in the years to come, despite a strong pushback from police and, in NSW, new laws being introduced to crack down ever harder. 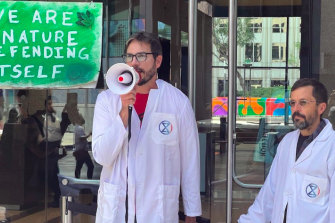 Malm is famous in activist circles for his 2021 book How to Blow Up a Pipeline, in which he argues that the global political response to climate change remains so inadequate that vandalism of fossil fuel infrastructure is now morally and strategically justified. Indeed, he says, it is the only rational response. (In a review in The New York Times the writer Ezra Klein suggests a more apt title would have been Why to Blow Up a Pipeline.)

Nearly four years before it was published, Reznicek along with another member of the Catholic Workers social justice movement, Ruby Montoya, did blow up a pipeline, or more precisely over a period of months they torched several stretches of a pipeline that moves half a million barrels a day from South Dakota to Illinois, causing millions of dollars worth of damage.

Later, as they faced up to 100 years in prison, they declared their only regret was that they had not burnt more.

Kalmus and three other scientists were arrested in April this year for chaining themselves to the doors of a Chase Bank office building in Los Angeles. They’d targeted the business because according to a report by the US environmental group The Sierra Club it had invested more money than any other bank into fossil fuels.

“We’ve been trying to warn you guys for so many decades that we’re heading towards a f–king catastrophe, and we’ve been being ignored,” said Kalmus as he was being dragged away. “The scientists of the world are being ignored, and it’s got to stop. We’re not joking. We’re not lying. We’re not exaggerating.”

When Mali Cooper, a 22-year-old activist from the flood-ruined town of Lismore, pulled her car across two lanes of traffic at the northern entrance the Sydney Harbour Tunnel at peak hour on Monday morning, slipped her head through a bicycle lock and attached herself to the car’s steering wheel, it was hardly the first time we’d heard of the group Blockade Australia.

On Sunday, June 19 police raided a property at Colo on Sydney’s outskirts where members of Blockade had been gathered in preparation for the protests that hit Sydney this week. According to the protestors’ accounts members of the group had stumbled across two police officers who were undertaking surveillance. As the undercover officers fled on foot, and then in a car, some of those on the property gathered around them. The officers called for backup which arrived in force. Seven were arrested on the spot and three more later.

Blockade Australia’s first protest action targeted the Port of Newcastle in November last year, when activists climbed machinery, suspending for a brief period exports from one of the world’s largest coal ports.

Then in March members targeted rail and road lines into Port Botany. At around the same time another small group of activists, Fireproof Australia, began blocking major roads in Sydney. The following month, Extinction Rebellion activists took to the streets around the world.

Blockade’s Port Botany protest not only infuriated authorities, but confused some otherwise sympathetic observers. Why target a port that did not export fossil fuels? The group was “identifying targets critical to the economy and blockading them”, a spokesperson told the Herald and The Age at the time.

Authorities threw the book at the group. The then immigration minister Alex Hawke used his powers to cancel the visas of two German nationals involved while NSW police hit those they arrested not only with the types of minor offences normally associated with protest action, but with crimes of incitement. Three activists were jailed for four months, six months and 12 months respectively.

The shift in tactics from targeting a coal port to a container port was significant, but this week the group expanded their efforts even further, targeting commuters and workers trying to get to work during a week already rendered chaotic by strikes in a city frayed by its recovery from COVID.

The frustration caused by the protestors was evident in their own livestreams. At the mouth of the Harbour Tunnel, Cooper sighs and gulps as a stranded commuter rages and swears at her through the car window.

“To this man I would say I stand with you. It is for you, it is for your family that we do this,” she says into her phone camera.

Footage from concurrent protest actions in the city shows activists weaving through pedestrians as they try to block streets with whatever material they find at hand. At one point a car forces its way through a clogged road. 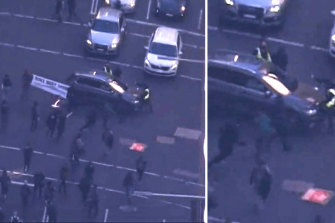 Potential for harm: A car drove through a protest in Sydney’s CBD this week.Credit:Nine News

The violent potential of the events is evident in the footage.

Concern about the tactics is not reserved for frustrated bystanders. Leaders of several organisations of the mainstream climate movement say they are worried the strategy is counterproductive, though those that spoke with the Herald and The Age were not willing to be quoted on the record about it.

Another of Blockade’s members, Jonah Shabtay, 26, dismisses the criticism that antagonising commuters might lose the climate movement potential support.

If someone abandons concern for climate because they have been inconvenienced on the way to work, he reasons, they were not that concerned in the first place.

“It would be great to change the hearts and minds of everyone on this continent, but we don’t have the time to wait for them to activate them to and turn that sympathy into action.”

Many of Blockade’s members are veterans of “defensive” protest campaigns designed to protect, for example, sections of forest from destruction.

Shabtay, a softly spoken graduate of the University of NSW, who works in the NGO sector, says Blockade and its tactics grew out of a frustration at the failure of other protest methods to bring about change.

“People involved in Blockade Australia have become quite tired of this spot-fire kind of reactionary activism. We’re seeing so much destruction that’s happening in an organised systemic way. To fight it we’d all have to set up camp across the whole continent waiting for a corporation to come and destroy it. There’s just not enough of us to do that, so that’s why we’re going for the heart,” he says of this week’s Sydney actions. 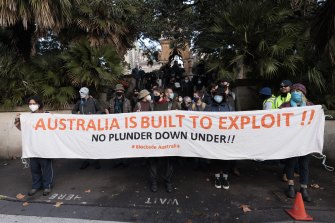 The end goal is unclear, though Shabtay hopes that it will spur other activists to mount similar campaigns, and to join future Blockade protests.

“We’re just trying to poke the beast, and you don’t know how it is going to react.”

He says Labor’s election will not blunt Blockade’s actions because the new government continues to back new fossil fuel projects, particularly in the gas sector.

Later on Wednesday, Shabtay was among a group of Blockade members who gathered to talk in a park in Turrella. They were met by ranks of police on the ground as a police helicopter clattered above.

By Thursday, Shabtay concedes that the overwhelming police reaction has disrupted the group’s plans for further protests, but he says the threat of prison will not deter the group from continuing the campaign in the long run.

Blockade’s members, he says, are more scared of climate change than they are of the law.

Social scientist and author Clive Hamilton, who has written broadly on protest and who was researching for book on the global climate activism movement as COVID hit, says he too wonders if targeting commuters is either reasonable or useful.

But he notes that the tactic is not new. Streets were blocked by suffragettes, civil rights protestors and the youth-driven movement against the Vietnam War. Hamilton believes climate protests will be similarly vindicated by history.

Earlier this month Hamilton was invited to host a workshop on direct action in Denmark at the University of Copenhagen. He’d been asked to facilitate a discussion on the ethics and strategic utility of direct action.

The 30-odd activists in attendance from Denmark, Sweden, Germany and the Netherlands, were nearly unanimous in the view that the time for peaceful protest had passed, he says. 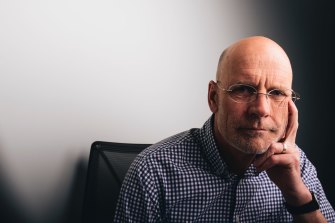 Hamilton believes the global activist movement, which he notes is closely integrated, has been “turbocharged”, influenced not only by the advocacy of writers like Malme, but by the intensifying impacts of climate change.

“They see themselves as rational actors, responding to scientific reports the only way they can,” he says.

A similar point was made in April by United Nations Secretary-General Antonio Guterres, who said in a video statement upon the publication that the world was on track to miss the 1.5 degree warming target: “Climate activists are sometimes depicted as dangerous radicals. But, the truly dangerous radicals are the countries that are increasing the production of fossil fuels.”

Kalmus was kept on by NASA and is yet to face court over trespass charges. He too believes that more disruptive protest is inevitable.

“I don’t see how that could not happen,” he says. “I mean, this is the first protest movement which is driven by fundamental physics … it gets a tenth of a degree hotter every five years.”

He was driven to break the law by desperation and fear for his children’s future.

“Nothing else I was doing was working. Nothing was getting through. You know, writing scientific papers, writing articles, writing books, giving interviews, wasn’t working.

“It wasn’t waking people up, there was something missing, right, some expression of urgency that wasn’t able to cut through the noise of all the other news, cut through all the worrying things that are happening in our society that are vying for our attention.”

A guide to the environment, what’s happening to it, what’s being done about it and what it means for the future. Sign up to our fortnightly Environment newsletter here.