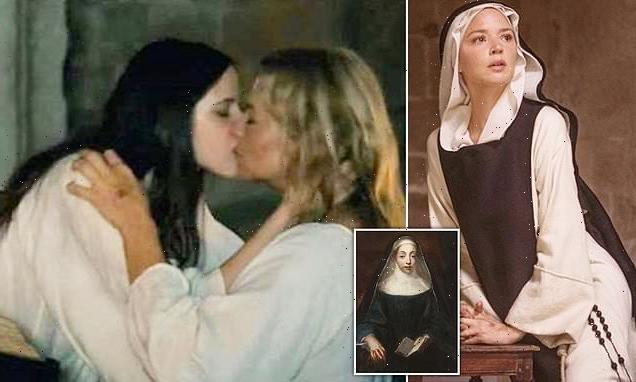 Described by film critics as a ‘sexy, satirical and spiritual’ and a ‘lesbian nun thriller’, Benedetta certainly has people talking.

It made headlines around the world when it premiered at the Cannes Film Festival and was met with religious protests when it played at the New York Film Festival.

Benedetta, which opens in the US this week and is slated for an April 2022 release in the UK, contains scenes of sex, self-flagellation and ‘nun-on-nun kissing’, as one commentator put it.

In one particularly provocative scene, Benedetta uses a wooden Virgin Mary figurine as a sex toy.

Yet what is perhaps most extraordinary of all is that Benedetta actually existed, and these events – or at least a version of them – actually took place. 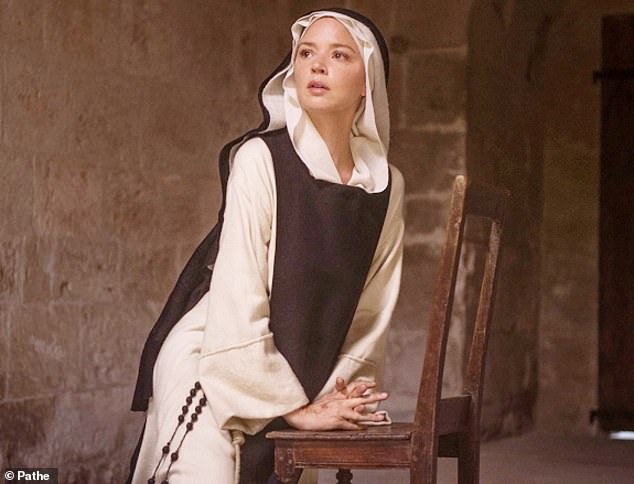 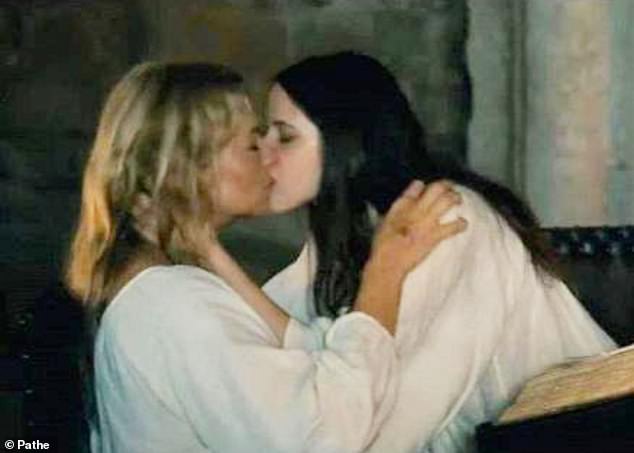 The film, which premieres in the US this week and is slated for a UK release in 2022, contains scenes of sex, self-flagellation and ‘nun-on-nun kissing’, pictured, as one commentator put it 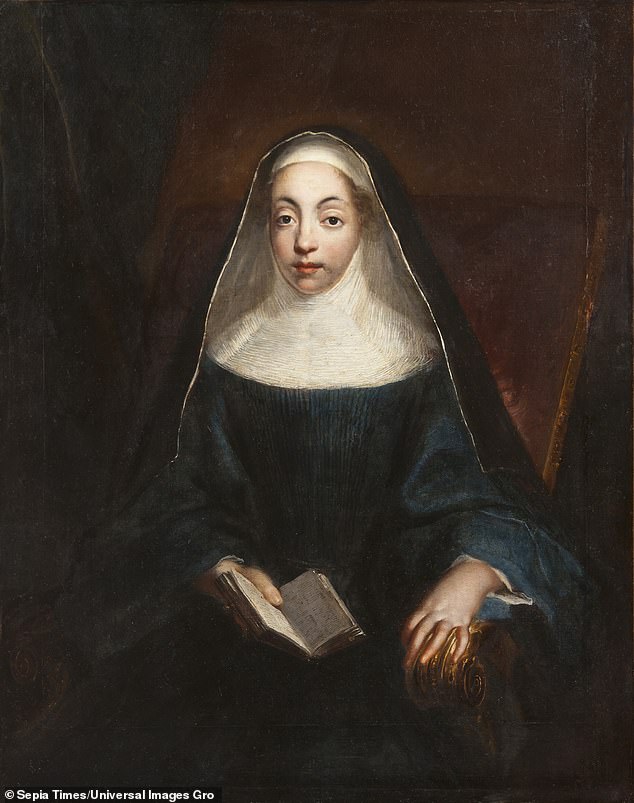 What is perhaps most extraordinary is that Benedetta actually existed, and these events – or at least a version of them – actually took place. Above, painting of a 17th century nun

Verhoeven based his film on Immodest Acts: The Life Of A Lesbian Nun In Renaissance Italy, published by American historian and professor Professor Judith C. Brown in 1986.

The story of Benedetta had attained mythical status in Italy and was passed down through generations but Prof Brown gave the story academic credibility by unearthing new documents in the state archives in Florence, which confirmed the authenticity of the story.

Born in 1591, Benedetta Carlini grew up in a respectable middle-class Italian family who educated her – a rarity for the time – and paid particular attention to her religious upbringing.

By the age of five, she knew the litany of the saints and other prayers by heart. At the age of six, Benedetta learned to read and even knew a little from Latin.

One day, when Benedetta was still a young girl, a black dog tried to drag her away but was frightened off by her screams. But when her mother appeared, the dog had vanished. The family decided that it had in fact been the devil disguised as an animal.

She also claimed to be able to communicate with a nightingale, a symbol of carnal love.

Benedetta entered The Convent of the Mother of God in Pescia, Tuscany, at the age of nine.

At the time in Renaissance Italy, middle-class families often ‘bought’ their daughters a place at a convent because it was a quarter of the cost of a marriage dowry and conferred respectability. 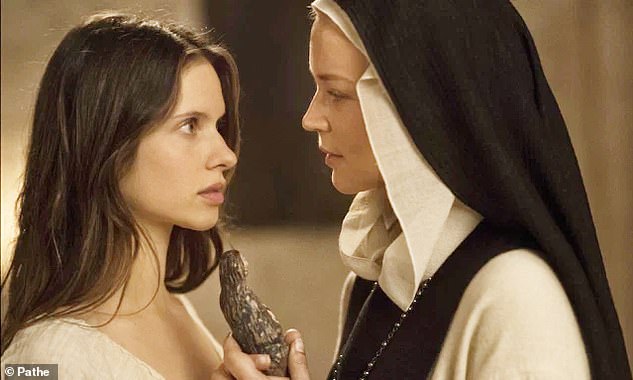 From the moment Benedetta and Bartolomea meet in the convent, the sexual attraction is clear. In one provocative scene, they use a wooden Virgin Mary figurine as a sex toy

Shortly after arriving at the convent, Benedetta was almost crushed by a statue of the Madonna while praying. She thought this was a miracle and showed that the statue wanted to kiss her. The young novice took this as a sign of the power of God.

However her early years in the convent were otherwise unremarkable. It was only at the age of 23 that she first reported the supernatural visions.

She reported ‘visions’ which came to her, including one in which Jesus asked to take her as his wife.

Other visions were more graphic and sexual. She would ‘speak’ in the voices of angels and underwent a mock marriage ceremony at the convent where only she could ‘see’ Jesus, her new husband.

Some of her visions occurred in front of witnesses who noted she had gone into a trance-like state in which she appeared to be in an altered state of consciousness. However others were less convinced by Benedetta and feared she could be a fraud.

She became a sensation with people flocking to see her and once showed stigmata on her hands –bleeding wounds similar to the ones the Bible says Christ suffered during the Crucifixion. At the age of 30, she was made abbess of the convent.

The other nuns were so concerned by her increasingly disturbing claims that they reported her actions to the papal council in Rome and were ordered to confine Sister Benedetta to her room. 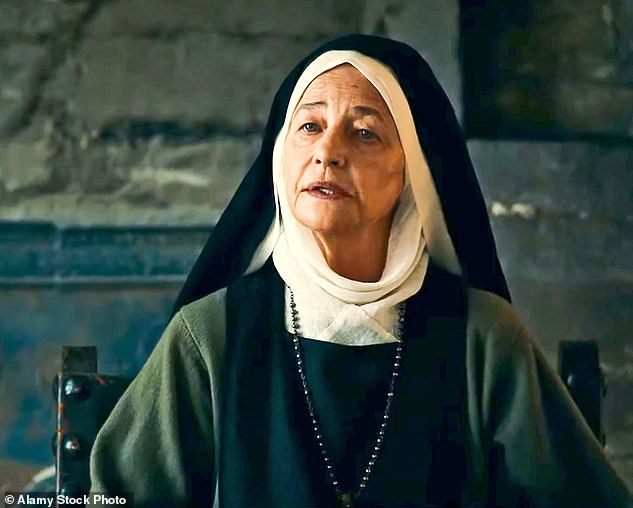 A young novice nun, Sister Bartolomea Crivelli, was assigned to watch over her. However, the pair embarked on a lesbian affair, with Benedetta claiming she was possessed by a male demon and so it was not a sin.

Benedetta was subject to two inquiries. The first found she was truly blessed, but the second discovered many inconsistencies in her stories, and was backed by testimony from other nuns.

Nuns told how they saw Benedetta inflicting the apparent stigmata on herself, and testified that they had seen her eating meat and cheese, despite these foods apparently being banned by Christ in her visions.

Another nun had seen her put her blood on a statue of Christ, which Benedetta then claimed began to bleed in honour of her sanctity.

The most startling testimony came from Bartolomea, who detailed their sexual relationship.

As the investigators noted: ‘This sister Benedetta, then, for two continuous years, at least three times a week, in the evening after disrobing and going to bed would wait for her companion to disrobe, and pretending to need her, would call.

‘When Bartolomea would come over, Benedetta would grab her by the arm and throw her by force on the bed. Embracing her, she would put her under herself and kissing her as if she was a man, she would speak words of love to her.

‘And she would stir on top of her so much that both of them corrupted themselves. And thus by force she held her sometimes one, sometimes two, and sometimes thee hours. 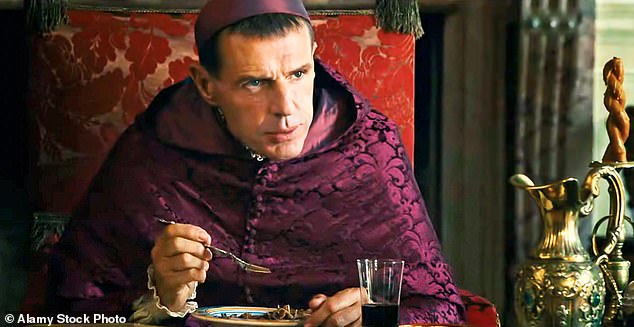 While some believe Benedetta’s visions, others, including Rampling’s character and the nuncio (Lambert Wilson), pictured, question her motives. Their suspicions lead to a trial that concludes with Benedetta losing her position

‘And Benedetta would tell her that neither she nor Benedetta were sinning because it was the Angel Splenditello and not she that did these things. And she spoke always with the voice which Splenditello always spoke through Benedetta.’

The film paints a more ambiguous portrait of Benedetta and what transpired in the convent.

This apparent closeness to God, as well as her stigmata, elevates her above her fellow nuns and leads to the ousting of the convent’s Abbess (Charlotte Rampling).

From the moment Benedetta and Bartolomea meet in the convent, the sexual attraction is clear. Unlike in real life, it is Bartolomea who seeks out the relationship.

‘She is, of course, very happy when Benedetta gains more and more power, even if she doesn’t really believe her [visions],’ Patakia told the New York Times.

‘But she doesn’t care, because what she wants she can get through Benedetta’s power, because they can have a room of their own and they can explore and experience whatever they want. 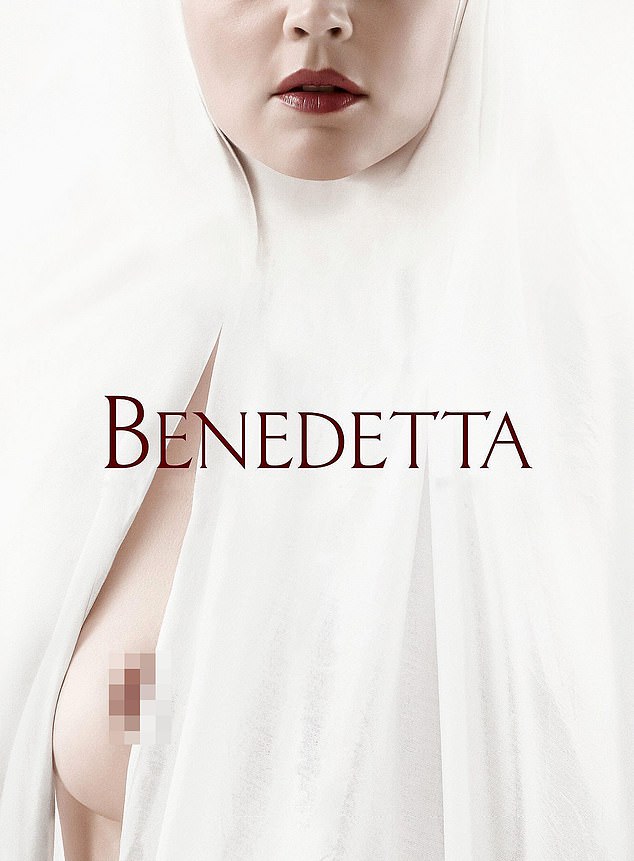 In the trailer, as the lead character enters, in habit and wimple, the nun ‘slips’, causing Benedetta to reach out, almost touching the novice’s naked breast before recoiling

‘They both want the power to do whatever they want, and I think that’s also what they share in common, but maybe it’s more clear for Bartolomea.’

While some believe Benedetta’s visions, others, including Rampling’s character and the nuncio (Lambert Wilson), question her motives. Their suspicions lead to a trial that concludes with Benedetta losing her position.

Papal authorities determined her revelations were the work of the Devil, not God; ‘a diabolical obsession’. They stripped her of her rank and she was in the convent’s ‘prison’ for the remaining 35 years of her life until she died in 1661.

Saga is first firm to offer paid leave to new grandparents – what are your rights?
World News