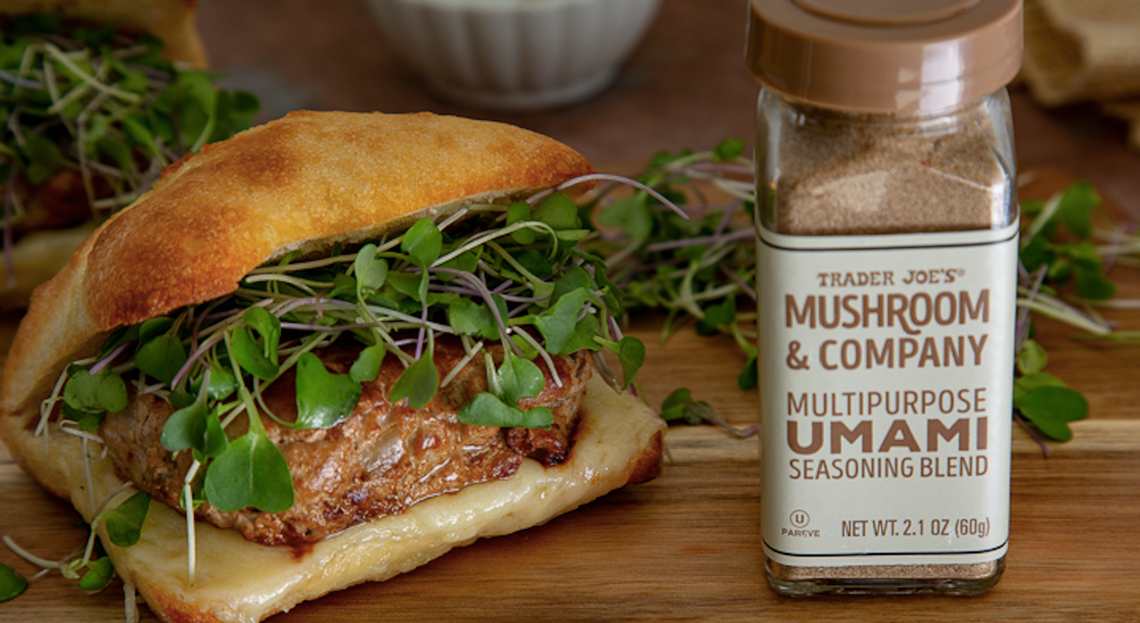 One of the first things you learn in preschool is the four taste categories: salty, sweet, sour, and bitter. But, if you’re up to speed with the culinary community, you’ll know the fifth category: umami. Umami is often compared to savory, but savory itself isn’t an apt description. The word, coined by Japanese chemist Kikunae Ikeda, per the New Yorker, roughly translates to "deliciousness". The truth is, it’s a hard flavor to capture, but TJ’s is throwing its hat into the ring with its Mushroom & Company Multipurpose Umami Seasoning Blend, now at Trader Joe’s.

To create the Umami Seasoning Blend, Trader Joe’s explains, "[They] began with kosher salt, and used a flavor base of porcini and white button mushrooms – earthy mushroom flavor really is the cornerstone of umami, which is why [they] named it Mushroom & Company." Some of the other key ingredients on the list include onion, mustard seed, both red and black pepper, and thyme.

The result is a brownish powder mix bursting with flavor. It is free of sugar and unnatural color, vegan, and the perfect addition to pretty much any non-sweet dish you can think of. Then again, nobody has confirmed the seasoning blend *doesn’t* taste good sprinkled on ice cream. 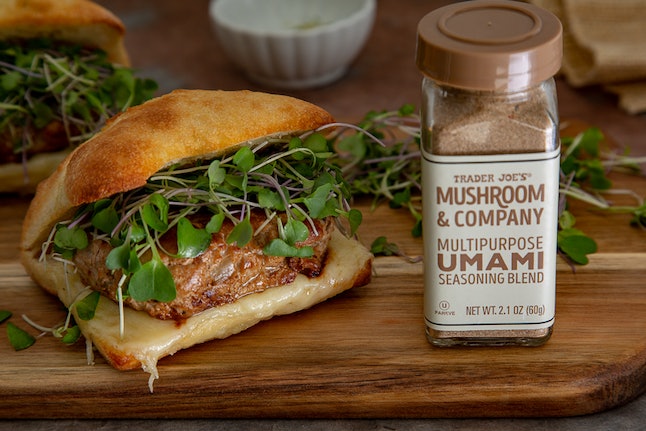 If the whole concept of umami is still a little confusing to you, maybe this will help flesh it out. One of the pantry items that exemplifies the flavor is soy sauce. The condiment is a staple in much East Asian cooking. A mix of fermented soybeans, grain and other uncommon ingredients, the thin sauce is brewed for months to become dark, rich, salty, and extremely flavorful. Remarkably flavorful, in fact. If you’ve had it, you understand. The flavor of soy sauce is deeper than just salt, but it is hard to explain. That’s umami.

NPR explains, an a chemical level, this is due to the presence of glutamates. In an article and radio segment that explored the concept of umami, NPR explained, "Glutamate," an amino acid, "…is found in most living things, but when they die, when organic matter breaks down, the glutamate molecule breaks apart." This can happen in a number of way including by cooking meat or aging cheese. When glutamate becomes L-glutamate, that’s when things get yummy.

It took a lot of convincing, but as The Guardian explains, scientists now recognize umami as a formal fifth taste, alongside the traditional sweet, sour, salty, and bitter.

So, back to the little bottle of umami Trader Joe’s has produced. The culinary crafters at the world’s favorite hipster grocer put a lot of thought and time into this product, and it shows. The Mushroom & Company Multipurpose Umami Seasoning Blend is getting a lot of airtime on various Trader Joe’s blogs, and being shouted out by a great deal of devoted Trader Joe’s shoppers. If you’re intrigued by the seasoning but unsure of how to use it (or just wanna polish your kitchen skills) you can find some tasty umami-laden recipes on the Trader Joe’s website to try.