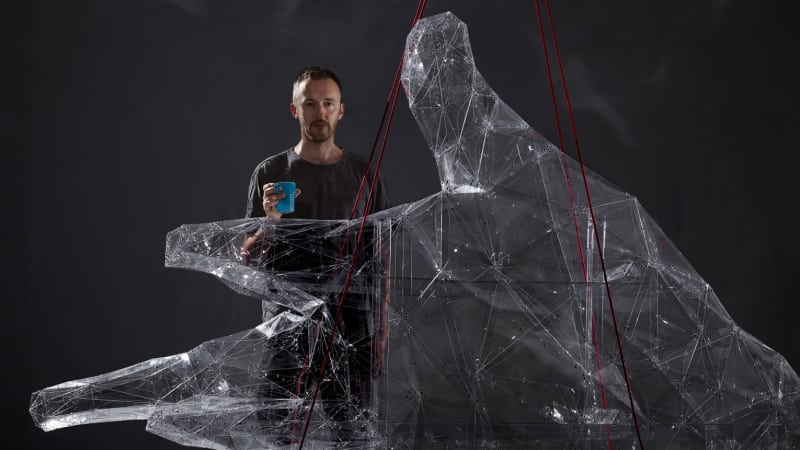 It took six weeks for British artist Toby Ziegler's 3D printer to spit out a sculpture commissioned by Hobart's MONA. The printer was running 24 hours a day and Ziegler, living upstairs at his studio, would come down every few hours to "feed" the printer so it could keep churning out the sculpture.

Technology in the 21st century might seem to be all about speed but, as Ziegler observes, it can also be about patience. 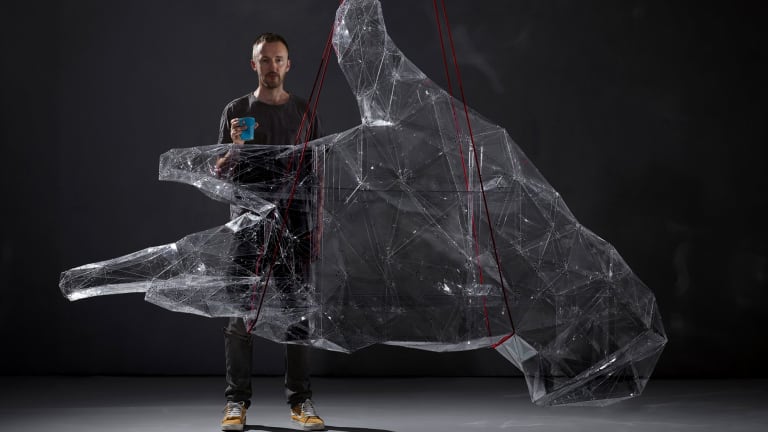 That sculpture – a 3.7-metre tall, ungainly creature that lurches with baroque flourishes – was designed on a computer. Ziegler then modelled it with coils of clay, scanned it back into the computer, printed it and foundry-cast it into aluminium. It's called Your Shadow Rising, also the title of his new MONA show. During the sculpture's long gestation, Ziegler also worked on a suite of paintings, some digital projections and an enormous hand that now floats in the middle of the room his work inhabits at MONA.

The speed at which art is constructed by an artist and the pace at which it is received by a viewer is central to Ziegler's interests. When we stand before one of his layered, eye-tricking paintings, time slows down. Stand before his moving-image works, though, and we are catapulted into 21st-century image-overload.

For the video work, Ziegler put six images through an image search engine. On the wall, each still image – mostly fragments of body parts cropped from famous art works – is matched with all the results the search engine coughed up, flashing by at frenzied speed.

"Obviously I am very interested in the way we receive and are bombarded by images," Ziegler says. "Pretty much everything in the show has a strong digital element, at some point it has been worked on by a computer. And a lot of the motifs are images that have come from the internet, low-resolution jpegs."

Ziegler dropped out of art-making after leaving art school, unsure what purpose art served, especially painting. In the end, he used computers as a mediator.

"I think painting is still useful for people precisely because it is slow to make and slow to read," he says. "I definitely go back and look at paintings over and over again, and the ones that I find most fascinating are the ones that are kind of annoying. Often things that are damaged or unfinished – they reveal more of themselves, in a way, but also they are more elusive.

"The thing about damaged or unfinished paintings is that they make explicit something that is probably true for all painting or art, really: and that is the relationship with the viewer and how the viewer completes the work. It is interesting how when I approach an artwork, I am aware that I am bringing a lot to the table, bringing associations and experiences."

So it is not unexpected when Ziegler describes his work as geological. Looking at his layered paintings, flashing videos, a dangling transparent hand and the stone-like sculpture, they are clearly adventures in excavation.

Your Shadow Rising is at MONA until March 25. mona.net.au