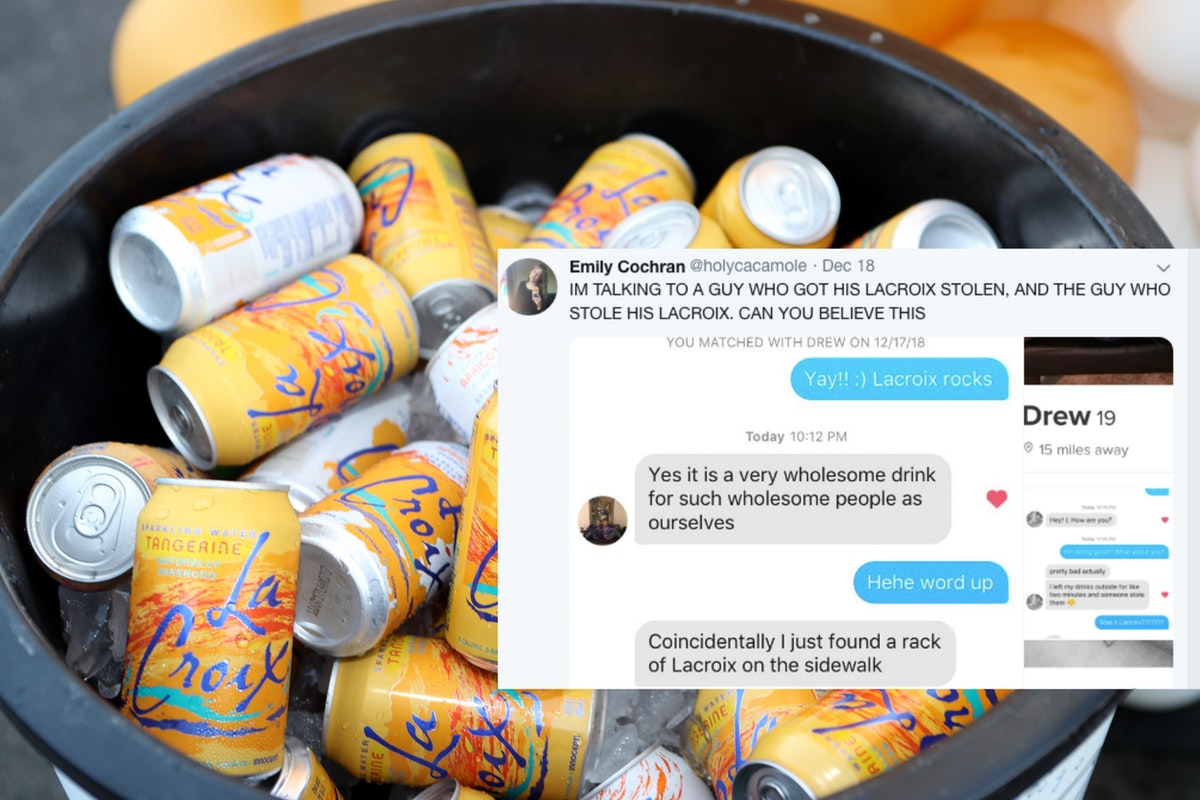 They say it’s a small world, and perhaps you’ve had six-degrees-of-separation experiences, too. For instance, dating-wise, maybe you and a friend match with the same person on Tinder … and OkCupid … and Bumble. Or you befriend someone at a party, only to realize you have more than 50 mutual friends on Facebook. How did you not know each other before?! Well, on December 17 via Tinder, Emily, 18, matched and messaged with a guy, Drew, 19, who’d just found a case of LaCroix on the sidewalk — and also matched and messaged with the guy, Raymond, 20, whose “drinks” had just been taken off the sidewalk. So, yes, within about a half-hour, she matched with the LaCroix thief and the LaCroix victim.

“It was Monday night when I had just been messaging guys on Tinder, and I saw that Drew was holding a LaCroix can in his profile pic,” Emily tells Bustle. “I didn’t have much to say besides: ‘LaCroix rocks’ — which I genuinely meant!” She was also messaging with Raymond, and since she thought they were both cute, she wanted to see where the conversations would go. Both guys live about 30 miles from Emily.

“Then, by literally random chance, Drew had found the case of LaCroix while texting me,” she says. “And if I hadn’t asked Raymond how he was doing that night, I would’ve never found him!” Through more messaging, she got confirmation that the stolen drinks were indeed Raymond’s LaCroix .

“I let both guys know that I was talking to both of them, and neither could believe me because it sounded too crazy to be true,” she says.

Raymond tells Bustle that pamplemousse, his favorite flavor, was the kind of LaCroix that was taken. “I was running into the house to grab something, and was coming right back out to get retrieve the case … and that’s when Emily wrote.”

Emily says that Drew felt so bad about taking the sparkling water that he suggested returning them (though he’d already had two). Emily got an idea: She told Raymond to stay at the scene of the crime, where his LaCroix had been stolen. “But I didn’t tell him Drew’s name because I didn’t want to rat out my new friend,” she says. So, yes, the two guys met and had a drink together, so to speak — cans of LaCriox. Then, the guys sent Emily video proof of their meeting.

“Raymond had added me on Snapchat for updates, and that’s when I received the video that the two met up, and instantly became friends,” Emily says. “They even hung out again last night because they live so close!” Raymond says he and Drew met for dinner and talked about how funny the situation is.

“I’d say there’s something of a bromance there, but the knowledge of an imminent battle for a date with Emily is definitely preventing said bromance from actualizing,” Raymond says.

The Twitterverse loves the story, too. In fact, it’s been retweeted about 66,000 times. Emily is surprised by how much attention her tweet has gotten. “I am so surprised that this got so big, and so are the guys,” she says. “We have a group chat and we were all freaking out.” While her tweet was blowing up, she was working her regular 12-7 p.m. shift yesterday and couldn’t check her phone all day. Instead, customers were letting her know how many likes the tweet was getting. “I was honestly shaking,” she says. “There my name was, trending on Twitter, but I was at Starbucks nervously making drinks.”

Raymond, too, says it’s ridiculous how much attention Emily’s tweet is getting. “It’s extra weird for me because I don’t have any social media, so having people texting me telling me I went viral on Twitter was beyond confusing, and equally surreal,” he says.

Emily’s even started a poll where you can vote for Team Raymond (who lost his LaCroix) or Team Drew (the LaCroix taker). Of course, no matter who wins the poll, the situation seems to be a win-win-win for Emily, Raymond, and Drew; although LaCroix and Tinder seem to be the real winners.

And, although the guys have hung out, Emily has not met either one IRL. “Unfortunately, I’m too far to meet up with them yet,” she says. “And I actually didn’t get the chance to flirt with either of them before we got down to real business. We all have been talking in a group chat about our fame instead of personally chatting, but we really need to meet each other.”

Like Emily says, all three of them have been group chatting, but what about one-on-one chats between Emily and each guy? “Now that you bring it up, I’ll probably start messaging her one-on-one,” Raymond says.

As for if Raymond wants all three of them to meet up or if he wants to see Emily on his own, he says, ideally, he’d like to do both. “I’m confident I’d be the first she’d want to meet with individually after all three of us hang out,” he says. And he definitely wants to ask her out. “Of course I do,” he says. “It would be too iconic not to.”

As for which Tinder match Emily will go out with, the verdict’s still out. “I can’t decide which one I like better,” she says. “They both are really cute!” So, see? You never know where swiping on Tinder can lead.

How old is Bear Grylls, who is his wife Shara, how many kids do they have and when did he become Chief Scout?